Faye has a severe case of mysophonia (where little noises take her from tranquility to charging rhino in 0.5 seconds), and Beth loves to whisper to herself when she is trying to fall asleep, or just make noises with her mouth. They aren't loud noises, but every. single. night. we had to deal with banshee-esq screams and retaliating howls from Beth. Let's not even discuss Keith's need to imagine, and the explosion noises he makes (standard boy package) and how the escape of a single explosion from his lips turns into a full on war in the basement.

Like I said, bedtime was horrific. For a year.

Mother's Day weekend I decided I had had enough! After lots of plan making, and weighing all the options, we decided I would give up Arcadia *sniff* and Faye and Kip would move into there, and Beth (who hates to be alone) would move back into the pink room with Vince. And then I would move Arcadia down into the hideous orange room that was previously the girls room. The thing about that room is, it really isn't safe for a bedroom, so it was a good move. The furnace room is in that room. Literally. There is no wall separating the furnace and water heater from the room, and I always worried, if there were an earthquake, that it would kill my girls. Now it is my quiet space, and Jeffrey has plans to build a wall, and I have plans to paint that ugly orange! I am not decided on a color, and that doesn't matter because it is very low on the docket right now. The point is, Arcadia is now orange, and downstairs in the basement. This is a problem because I rarely go down there. I rarely go down there because when I do have a spare moment, I need to be where I can still hear the little ones, and the furthest corner of the house in the basement is not ideal for that. Sigh. What can you do though?

And so, Mother's Day weekend we swapped rooms. I set up Arcadia mostly, but basically threw all of my spare stuff on the bookshelves because I didn't have time to organize. Today was the day of the great organization. I will spare you the details, but I am quite happy with it now! My ministering sisters are coming by tomorrow, and I really wanted to have it clean so we could go down and visit there, instead of in the living room where there is just the one couch. And also, it is so quiet and peaceful down there! Of course, the eye hurting orange really clashes with Grandma's violet red couches, but everything else looks quite nice! 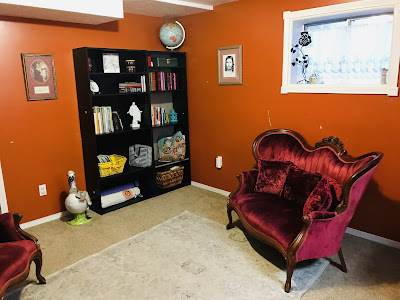 Unfortunately, the rest of the house was neglected while I took care of Arcadia. But it is important to have at least one clean and quiet place to retreat to when things get a bit much, right? When I finished cleaning and organizing I was so happy to plop down on my rug and pull out all of my scripture study materials and go to town prepping for tomorrow's lesson. I love that I have a quiet place to do that in. And I plan to go down and do some yoga before the children are awake tomorrow. Because I now have space to do these things! 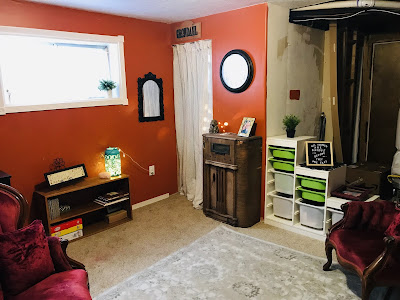 Tomorrow I get to focus on the rest of the house though, before they come. I mean, I need to at least clear a path so we can get to Arcadia. It feels a bit like an epic journey. Maybe I will play some Lord of the Rings music while we are trudging through the Mountains of Mess, and fighting off the little hobbits that reside in my home. They are sweet and innocent enough looking, but they will eat you out of house and home if you let them. And they are terrible house guests! Nearly all of the mess in my house is because of them. 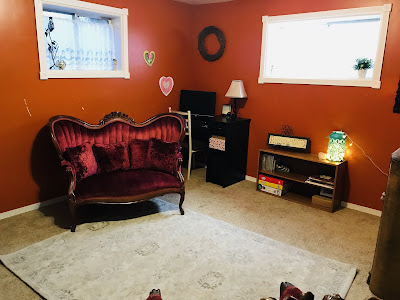 Email ThisBlogThis!Share to TwitterShare to FacebookShare to Pinterest
Labels: All About Me, Arcadia, Motherhood, New Beginnings

So pretty! Glad you found a solution!