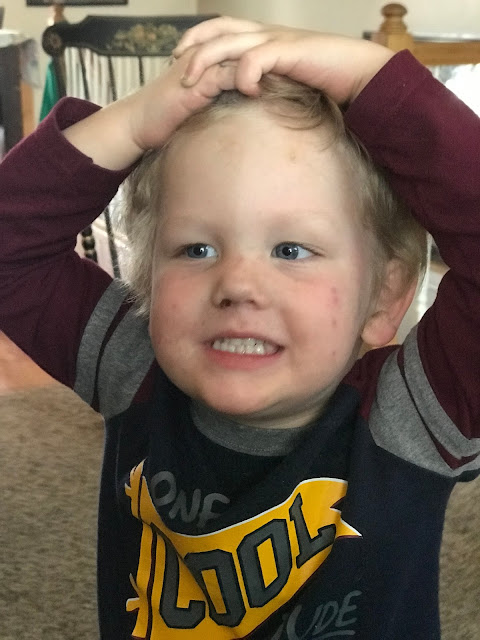 Let's just talk about my little boy. Vince has decided that he doesn't need any help from anyone. He can just do everything he needs on his own, thankyouverymuch. He is 3. And by that, I mean he is a new 3 year old. Fresh off the birthday last month. He has taken to wandering the neighborhood, or anywhere he feels like. Between Onyx our dog, and Vince, I think Houdini has come to stay at our house. In spirit anyway. I'll expound on Onyx later, but Vinny, he is the reason I am "greying gracefully" as they say. Although I am not sure how graceful it is due to that little stinker!

Vince and Kip never ask for help. Unless they are stuck somewhere. They never ask for permission to get into things. They just go and take, or go and do. It is not uncommon for me to walk into the kitchen to see Vince or Kip walking across the counter, balancing on the narrow strip of counter next to the sink front, and then over and across the stove (!!!) to get what they want off the top of the refrigerator. Because silly me, I thought it would be safe up there. Both boys just get whatever they want. Did I mention that Kip is 1? He has Vince as an incredible example for him, and together they get into everything, and make the biggest messes known to man, but they are so stinking cute when they do it, it is very difficult to get properly angry with them, enough to really get after them. And so they keep doing what they are good at, and I keep going grey. Meh, what are you going to do?

Vince has been taking the ladder off the trampoline and leaning it up against the chain link fence, and climbing the fence into the neighbor's yard! Or just walking out the front door and roaming the neighborhood. He isn't ever running off to be naughty, he is just being adventurous. One day we found him running down by the train tracks, because he was chasing Faye's balloon that had gotten out. Can I just tell you the truth, Vince is a darling sweet little peace of mind murderer. I have gotten to the point where I have to know where he is at all times! If I don't know where he is, he is either making a mess somewhere (today he dumped a full box of cereal all over my bed), or he is gone. So I watch the trampoline ladder, and the new chain lock on the front to make sure that Vince is at least corralled. Today he put the trampoline up to the other neighbor's fence, the neighbors that we don't know very well, and disappeared into their yard for a while. I mean, really! Keep in mind, most of the time when he wanders off, it is when I am babysitting, and Kip is asleep, so I have the option of waking Kip and throwing everyone in the van to go and find him, or waiting for him to come home... which is less likely.  It is a horrible dilemma, and if anyone has any suggestions on how to keep my independent 3 year old home and to stop him from wandering, I would really appreciate any help!

On the plus side, I don't think a sweeter boy has ever existed. Since his escapeades (See what I did there? :D) he has apologized multiple times, wrapped his outdoors encrusted arms around me, and promised me that he will never run away again. I mean! I'm not sure I was even a solid mass after that; the boy just melted me!

Unfortunately, his three year old promise was broken all ready, but only once, so he is trying! 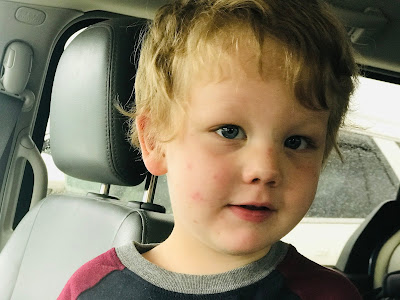