Pour Some Sugar On Me ---- but please don't actually 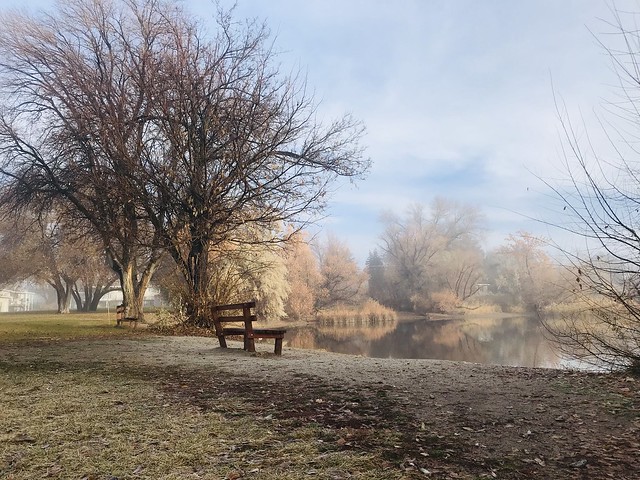 ***There is no real purpose to this photo other than it makes me happy. It was incredibly foggy the other morning, the morning where everything went down, and I like to remember that there was a little bit of tranquility that morning. The boys and I drove around for a few minutes before we began the rush and craze of the day, and I just had to get out and take this picture because it made me heart calm and full of peace. Who knew how much I would need it later in the day? ***

"I'm allergic to sugar, it makes me swell." ~Gina Judd

For the past 11 years that I have been blogging, migraines have been a very strong topic here. It is something I have lived with virtually every day for the past 28 or so years. It hasn't always been a blinding migraine, but there has been fairly consistent head pain for that long. It is always there, my constant companion, pain. I guess it has sort of become a part of my identity, which is really sad, if you ask me. No one should have to become accustomed to living in pain.

When I was pregnant with Vince it got so bad I finally called my doctor. Up to that point in time, I just referred to them as "really bad headaches" but I didn't think they were migraines because I didn't see an aura. I didn't get the lights, or the fuzz, or even light sensitivity. It was just a pain in my head, in one spot, that would become unbearable.  When I went in to see my doctor, he told me that what I had been experiencing for most of my life, were migraines. And he offered to do something about it!

I was so excited and had so much hope! He got me on a medicine and about a month into it I discovered I was pregnant with Vince, and so had to stop immediately. No research had been done on pregnant women, nor would there likely ever be. That is just not ethical! And so I had to stop immediately. But I planned to start again as soon as I finished breastfeeding Vince...

... except 9 months into his life I found out I was pregnant again. Which again forestalled taking any medication until after he was born and done breastfeeding.

Finally! I was able to get started on the journey to fix my head! I went to the doctor and he prescribed a new medication that is supposed to prevent migraines. It is an injection that you administer to yourself once a month, and it should keep you migraine free for a whole month. Also, to help the migraine that I was currently suffering from, he gave me another injection of torrid, a migraine medication that should have stopped the migraine right then and there, within the hour.

Three days later, the day I took that gorgeous picture of the thinking bench near the pond, Kip had a well child visit, and while there I mentioned that the medication didn't seem to be working, and my head was still in substantial amounts of pain. And so he prescribed me with imitrex, a rescue medication. That is supposed to be only taken when nothing else has helped and the pain persists. Hence the name, rescue medication. I went down to the pharmacy, got my promised pain relief, and then got the kids into the car, including picking up the sweet little boy I get to watch sometimes. I had a busy morning ahead of me. I had to go straight to pick up Beth from school, and then Taelynn, the little girl I watch. While I was driving I started to get really hot. I couldn't figure out why. I began to sweat. My head seemed to get worse. I got Beth, and then we parked the car, waiting for Tae to get out of school. I noticed that my face began to feel funny, but I didn't think anything of it. It seemed to go numb in spots, and tingly in other spots. I got the girls and we went home. They were hungry and wanted me to start on lunch immediately, but I really didn't feel well and had to lay down on the couch in order to recover. I mustered up enough strength and made sandwiches for everyone, and then went back to the couch. At this point in time my throat began to feel tight. No like it was difficult to breathe, but just really tight.

I decided it was time to call my doctor.

I called and left a message because they are always crazy busy. I asked what the side effects of the imitrex were, and what I should do about the things that were happening to me. Of course, they told me to make an appointment and get in as soon as I could. I called the mom of the kids I was watching and asked her if she could get them 20 minutes earlier than she normally would have so that I could go to the doctor. She is a sweetheart and was very obliging.

I got into the doctor's office and they hooked me up to an EKG machine to check my heart. Apparently that medication is known to cause heart problems in people. My heart was fine, thank heavens! They gave me an antihistamine shot to counter the effects of the imitrex, and within 20 minutes my throat was no longer tight or scaring me.

But that put us back at square one. What could I do for this pain, as nothing seemed to work for it at all!

My sister had been here for Thanksgiving and she recently found out she is allergic to all joy in foods. At least that is how I interpreted it. She can't have dairy, eggs, wheat, blueberries, sesame, or coffee. The coffee is the only one that isn't a blow to her as we don't drink coffee. She is the one who used to joke about being allergic to sugar. As we were discussing her new dietary needs and how difficult it was but how much better she felt already, it got me thinking. Perhaps my head pain was a result of food allergies... I began to watch how I felt when I ate and I made a disheartening discovery. I was at Adrienne's house and she had cheesecake. Not just any cheesecake, either, mind you. She had pumpkin cheesecake! The spicy, creamy, decadent dessert that makes my heart happy! However, I noticed, as I was eating it, there was a spike in the pain in my head. It suddenly became much more intensified, and so I put two and two together. I must have a dairy allergy.

I was so sad as I contemplated all of the creamy soups I would no longer be able to eat, or the cheese. Mostly I was sad about the cheeses. It seemed cruel and unnatural, but I decided if it could help to ease my head pain, I guess I would give it up.

Saturday I had the wonderful privilege of going to a holistic health conference in Provo. While I was there, I was lucky enough to get a session with a practitioner. I told him about my migraines, and he began to check some things with me. He said that I do have an allergy to milk, but it is hardly consequential. It is so slight, it wouldn't be causing the problems I was describing. I may have done a little happy dance then and there, and contemplated a cheese plate of epic proportions. The practitioner then continued; because I had had such a reaction with cheesecake, what else in cheesecake could be causing my problems. Sugar? We both sort of laughed at that, because who is allergic to sugar? Actually good and proper allergic to sugar? He decided to check it anyway, just to be thorough.

My body gave out a resounding YES!

In case you were wondering, Me. That's who's allergic to sugar.


I mean, I know it is bad for me and all, but actually allergic? There's got to be a support group for this somewhere.

Still a bit skeptical, last night I decided to give it a test. I had a candy cane, some cocoa, and another piece of cheesecake. Call me a masochist. But I really wanted one farewell piece of cheesecake. I scarcely slept last night because of the pain in my head! Today was no joke, as I tried to navigate a day with another migraine. I was sad when I realized I couldn't put the pumpkin spice creamer in my tea this morning because of all the sugar in it. I was sad when I couldn't make cocoa for myself. The family went out for Chinese tonight, and I stayed home with the little boys. I don't like Chinese food, but I love the fortune cookies! Except, I was severely disappointed when I remembered, once again, I can't have fortune cookies anymore. I have book club on Wednesday and am supposed to be bringing a trifle. I was so excited for that, but I guess I just wont be taking part in enjoying it. Not to worry, though, because I'm sure that by the time I am finished with our dinner I won't really want any dessert anyway, so it won't be much of a loss then, anyway.

This is going to be a huge shift in my lifestyle, friends. I mean, if there had been sugar eating Olympics, I could have taken the Gold home! In every living last category! Except peanut butter. I just don't like that. But Beth would have picked up the slack there, so Moon Hollow would have been adequately decorated. I'm just saying.

On to live a life without sugar. I am sure it is going to be a very fun transition figuring out how to give up something I am hopelessly and ardently addicted to. Yikes! But really, if it will help the pain in my head, I would walk across coals for that! Just not the ones that were on fire. And I would prefer to wear my shoes. But still! Stay tuned for my sweet but sugarless life. TBA

I didn't sleep last night but Vince certainly did. He slept so late this morning that he flat out refused to take a nap today. I did at one point get him into his bed, though, and as I read him stories, he fretted over his little toy robot. He kept fluffing the pillow, tucking the sheets around the toy, and cuddling up to the cold hard plastic thing in the most uncomfortable-looking but lovingly way. 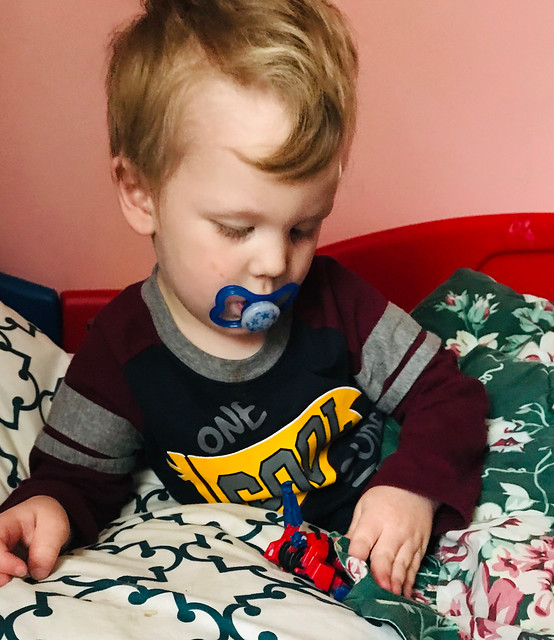 Vince didn't end up taking a nap. But robot did. I guess that's half the battle, right? Getting the toy to sleep?

Sigh, that boy is the most amazing and funniest little guy I have ever met, and I get so tired because of his antics every day. But I wouldn't have it any other way. I guess I get all the sweetness I need from him and his brothers and sisters. Who needs sugar when you have Littles like them, anyway? 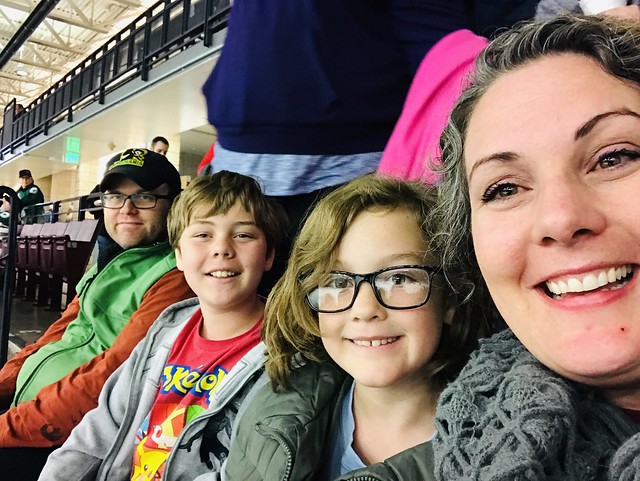 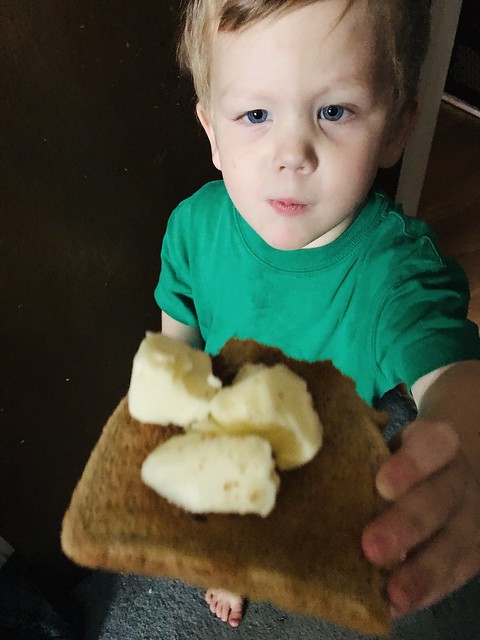 But butter? Now that is a whoooole different ball game, as you can see from Vinny's toast!
at December 03, 2018

Email ThisBlogThis!Share to TwitterShare to FacebookShare to Pinterest
Labels: All About Me, Health, Learning, My Mistakes, New Beginnings, Nutrition