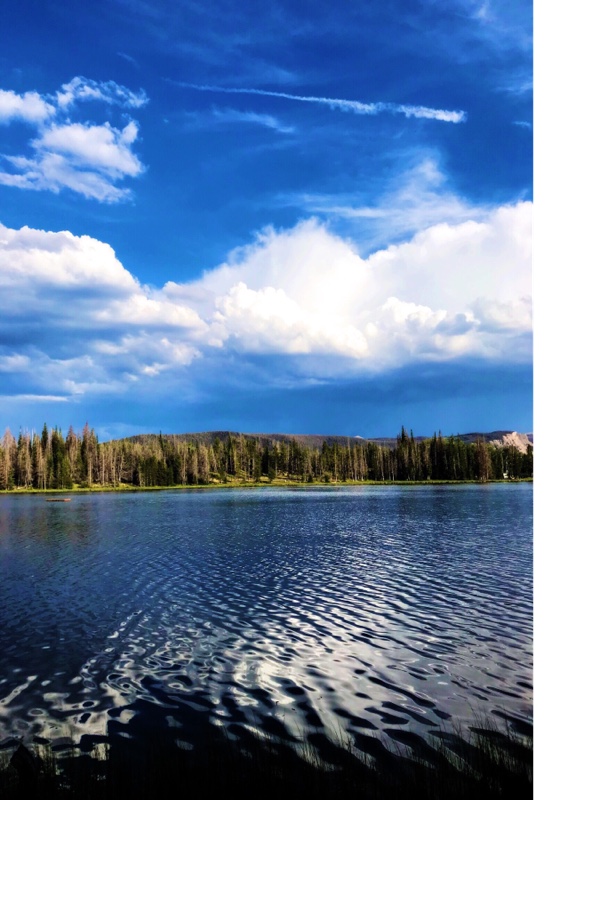 These past few weeks I have began to babysit again. It all happened suddenly. Brickale was telling me she didn't really have a place for her kids to go, the daycare they were in was being abusive and the state got involved and all kinds of awful things. I do love those kids, and so I asked her where they are now. She told me they are jumping around from person to person. Which breaks my heart! I know how important a schedule is for little kids. And so, I told her if she couldn't find anyone, I would watch them for her. Because I really do adore them.

Well, one night she messaged me out of the blue and asked if I could start watching them the next morning. The lady that was watching them had to fly back East as her father was sick... long story short, she suddenly didn't have anyone to watch the kids. Well, that first week with them they were sick, and then that first weekend with them, I was sick. Go figure. But we have all recovered since, and for this, I haven't had energy enough to even think about writing. 8 kids is a lot of kids!

On the 24th I was doing some morning reading about my ancestors and stumbled upon the story of William Stimpson and his account of the Martin Handcart Company. 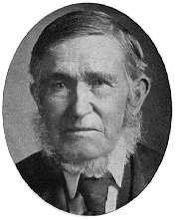 I had always wondered about it and wanted to read about it but didn't know how to learn about his experiences. I asked my grandma once, and she had said he never talked about it. It was too difficult and painful, and for the rest of his life, he simply wouldn't speak of it. Well, I think that was William Stimpson's father of the same name. The account I read was about a 4 year old boy. His mother was pregnant when they began the trek. Over the course of the trek, he had a brother die near the Platte River, and then when they reached Sweetwater, WY, his mother gave birth and passed away, and his baby brother followed suite a few hours later. It made me so sad to read about the pain and hardship of my ancestors, and I wanted to go visit my grandmother. I called my parents to see if they knew if my grandma was up to having visitors, and somehow or other a plan was hatched for us to go visit my parents at Lyman Lake in the Uintahs! They are up there as service missionaries right now, and have been there for the past two weeks. 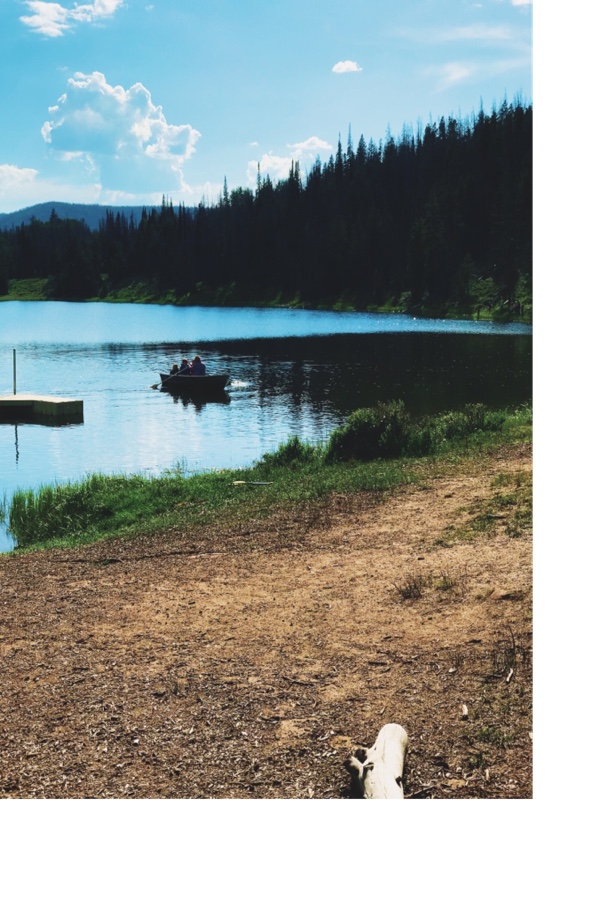 Lake Lyman holds a dear place in my heart. It is a Stake camp and so we would go up every year of my youth for girls camp, and sometimes for youth conference. It is breathtaking, and the air is crisp, and the memories are... well, it is beautiful. I didn't have many friends in my ward so I was lonely a lot, but I do remember the bliss of wandering around the mountains, and exploring the woods by myself. I remember distinctly sitting on a hill betwixt some aspen trees, and a cool and loving breeze came out of nowhere and completely encircled my heart with love. It was very special. And so, while I don't have many memories of the people up there, my experiences were precious and beautiful, and so that place will always be treasured in my heart. 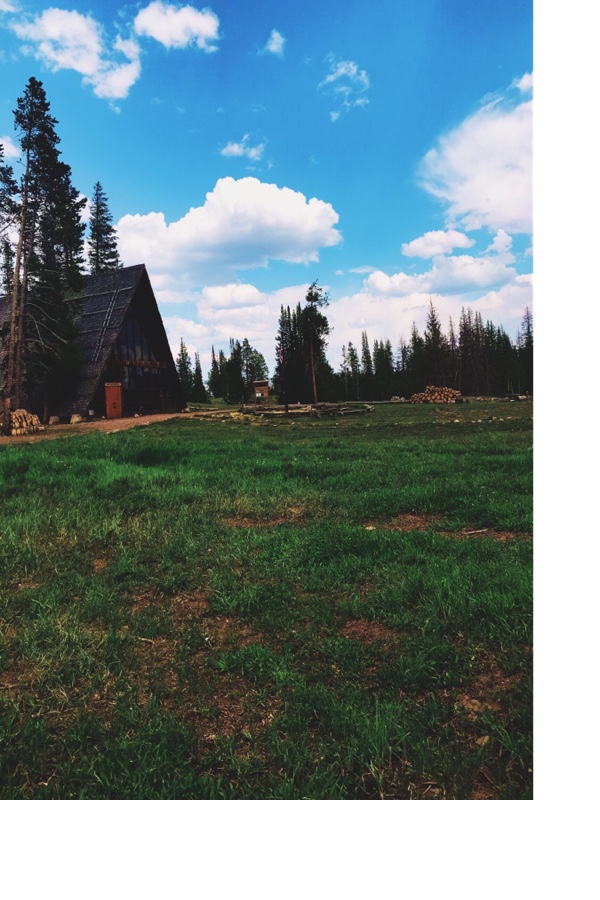 And so, when given the opportunity to go back, I jumped at the chance, and was especially excited to show my kids one of my favorite places on this lovely Earth. We got a rather late start. I insisted we clean the family room before we left. And then we had to stop at the store for some things for my parents and for s'mores fixings. Then we had to go to my parent's house to get my dad's tackle box... it was 11:30 before we left! Which means we didn't get up there until about 2. 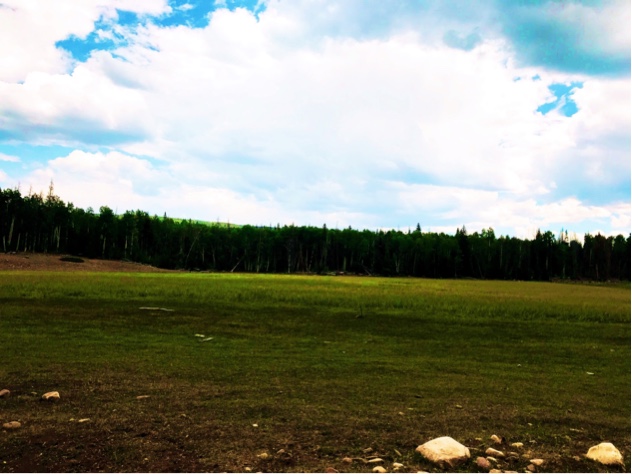 The air is so cool and temperate up there. I was able to drive with my windows down and just reveled in it! Partly because the last van we couldn't roll down the windows or they wouldn't roll back up, and the Tardis actually has 4 windows that roll down! On top of that, the air is just clean, and it wasn't overbearingly hot! So we drove over a dirt rode for about an hour, and scarcely saw anyone else on the road. And then we got to camp and it was just like I remembered it, only better! There have been so many improvements all along the way. The cabins are spruced up, the trails between the cabins and the biffies (outhouses) have been redefined and more wood chips have been laid. It is just wonderful! My mom made us some tacos for lunch, and then we went out onto the water. 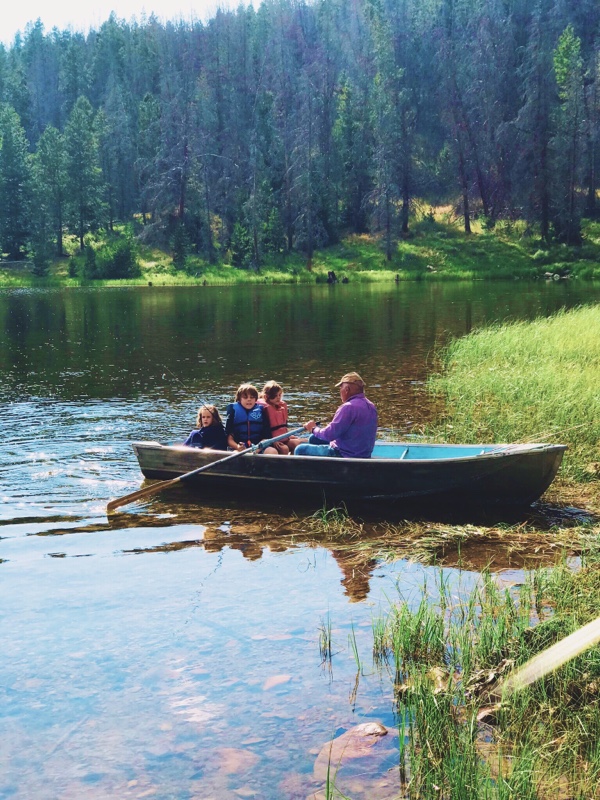 My dad took Keith, Faye, and Beth in the boat to go fishing, and I took Vince in a canoe. 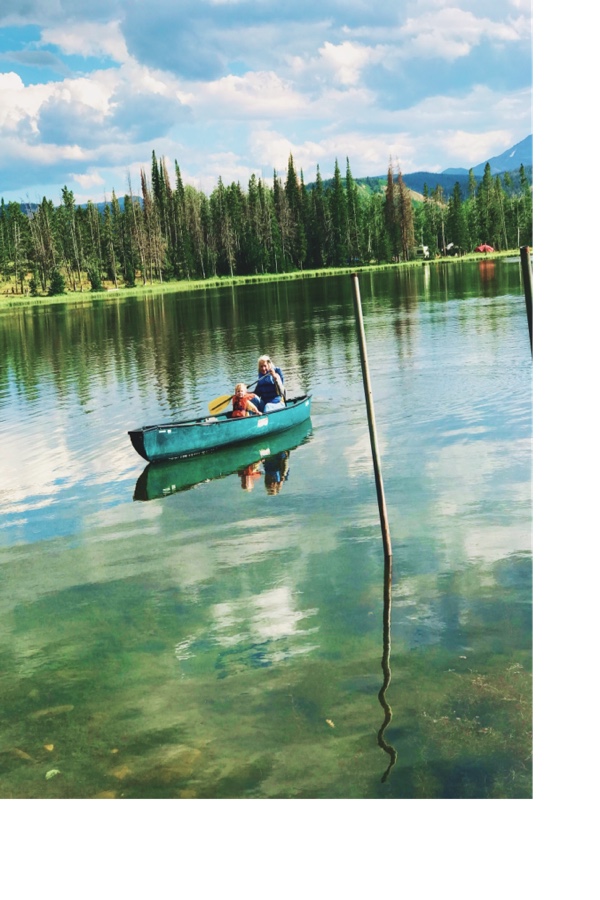 I was so impressed with him! We warned him over and over that if he stood up in the canoe it would tip over, and he was so careful and didn't stand up or wiggle too much at all! And being out on the water like that?! Heaven in a little fiberglass boat! 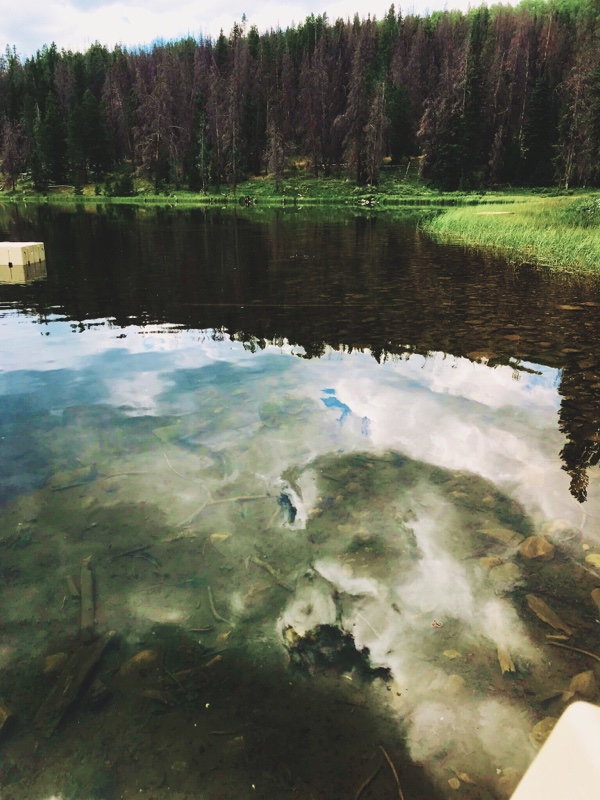 I was astounded by how clear the water was. I don't remember it being that clear. Then again, I went up with a couple hundred girls, and so someone was always in the water stirring it up. 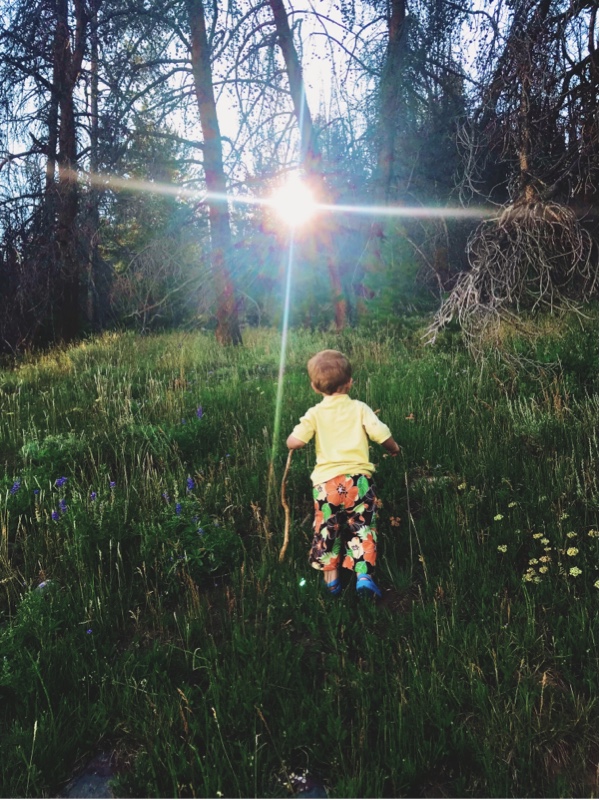 Vince and I got back to shore before my dad and the kids and so my mom (who had been watching Kip), Vince, Kip, and I all went for a walk around the lake, intent on gathering a bouquet of wildflowers. It was the most beautiful evening walk I think I have ever been on. 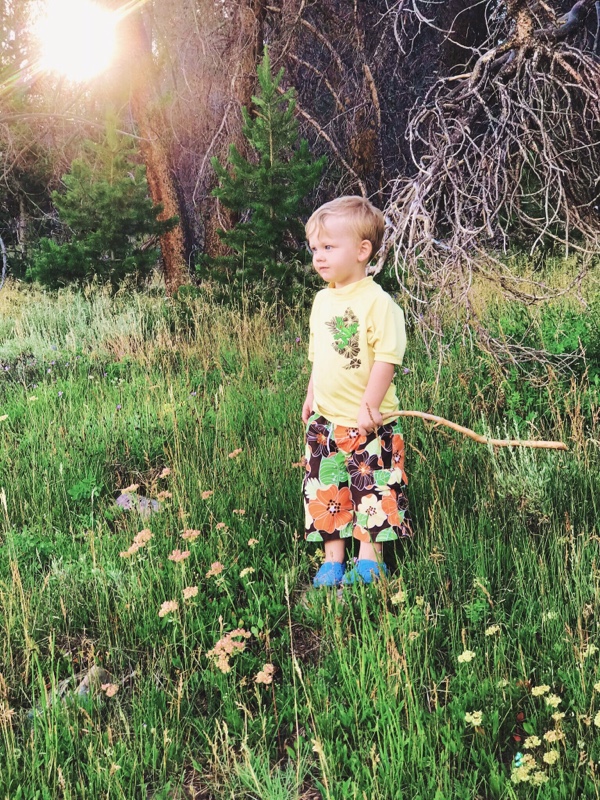 Vince was super funny with the little walking stick he found, and trying to either throw all of the rocks on the mountain into the lake, or to wander off the trail and up into the woods. 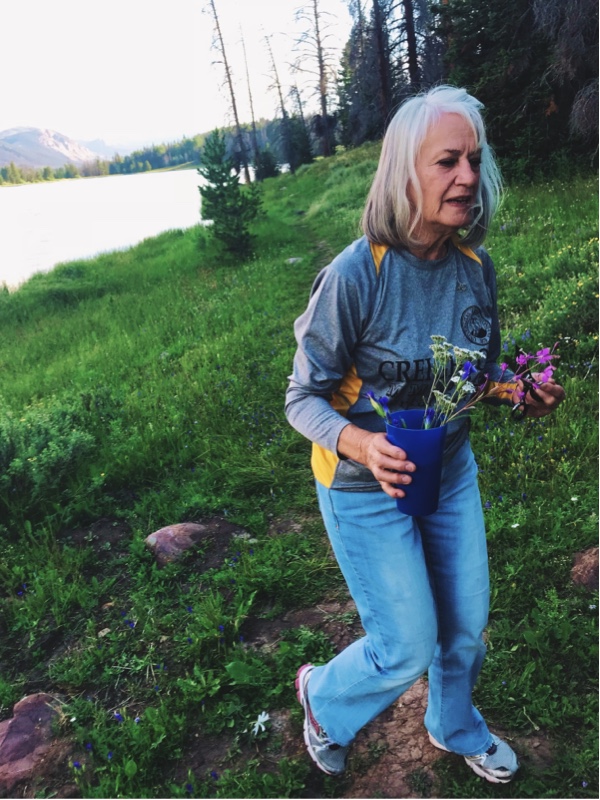 But the flowers were spectacular, and the sun was at its golden hour, and it was so quiet and tranquil. 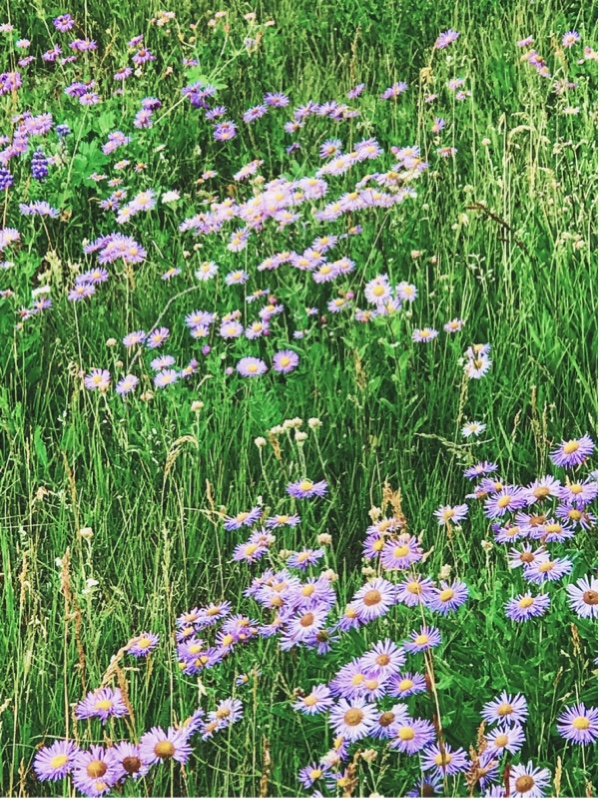 I will cherish that memory forever! 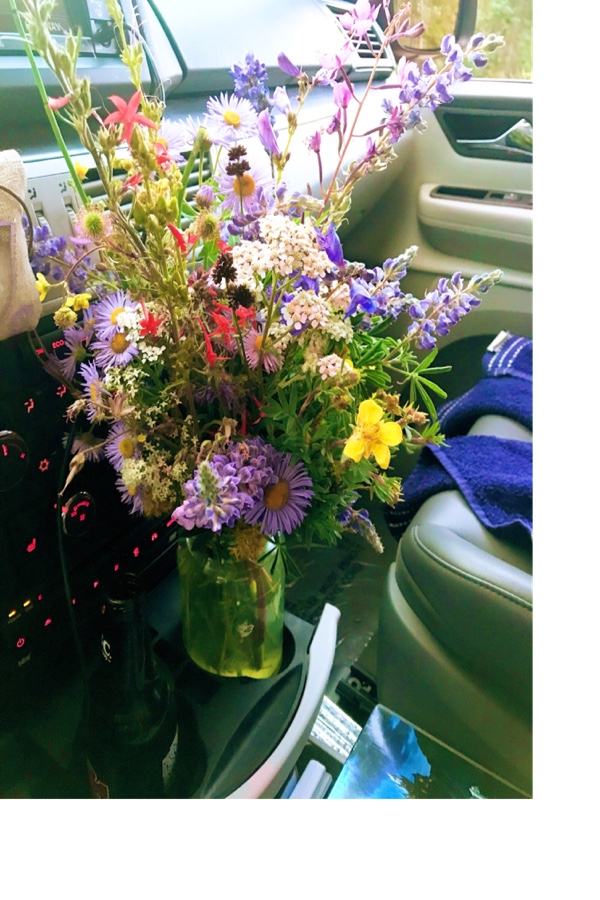 I hope I can go up more often because it really is just lovely. I would love to live there if I could. But you know me and Mountains. 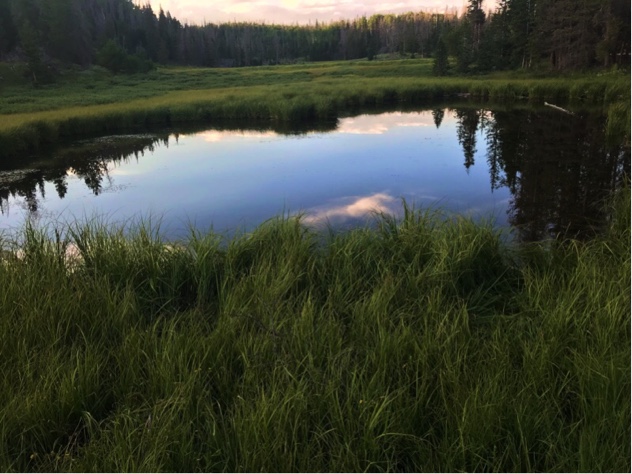 The kids finally came in, after we should have already left to go back home. But they were hungry. So we had to eat. We quickly made a campfire and made some s'mores. 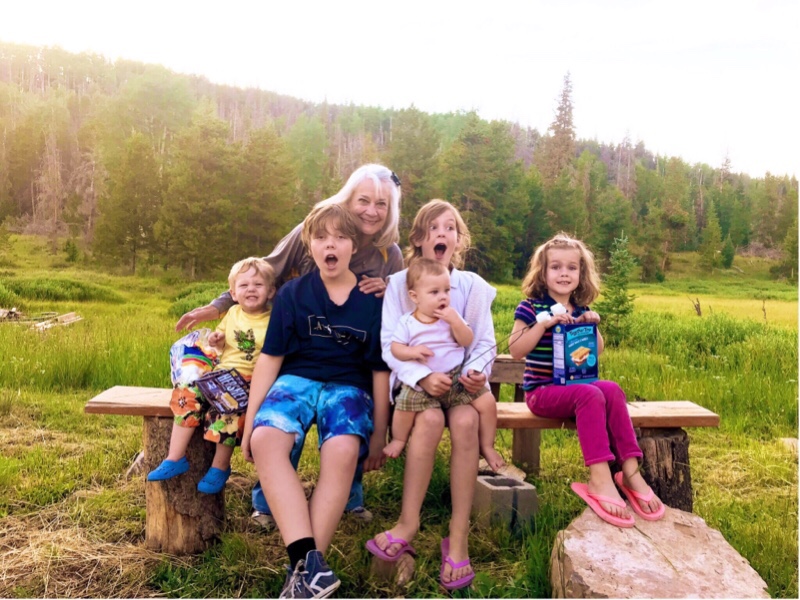 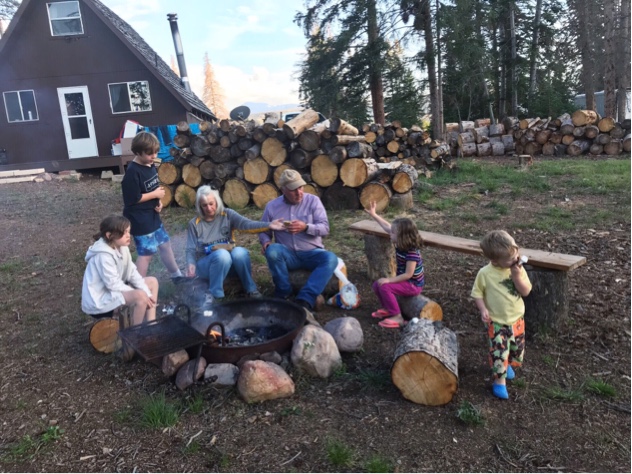 My mom then made some peanut butter sandwiches. Vince needed a bath before we could head out, though. He was completely covered in dirt and melted marshmallow and peanut butter. It's a good thing the Missionary cabin there is basically a tiny house, complete with a bathtub! I had wanted to head back home around 6, but there we were, leaving around 8:30. Oops!

My dad led us out of camp and pointed us in the direction of home. We chose to go out a different way than we had come in. it was 18 miles of dirt road instead of 30. My parent's had been on Mount Elizabeth this year, and while it is notoriously a terrible road to drive, they had said it was a lot better, and so we opted to go out that way.

While a month ago the roads may have been fine, now, they were terrible! It took us twice as long to get home as it would have taken to go the other way. But you live and you learn. 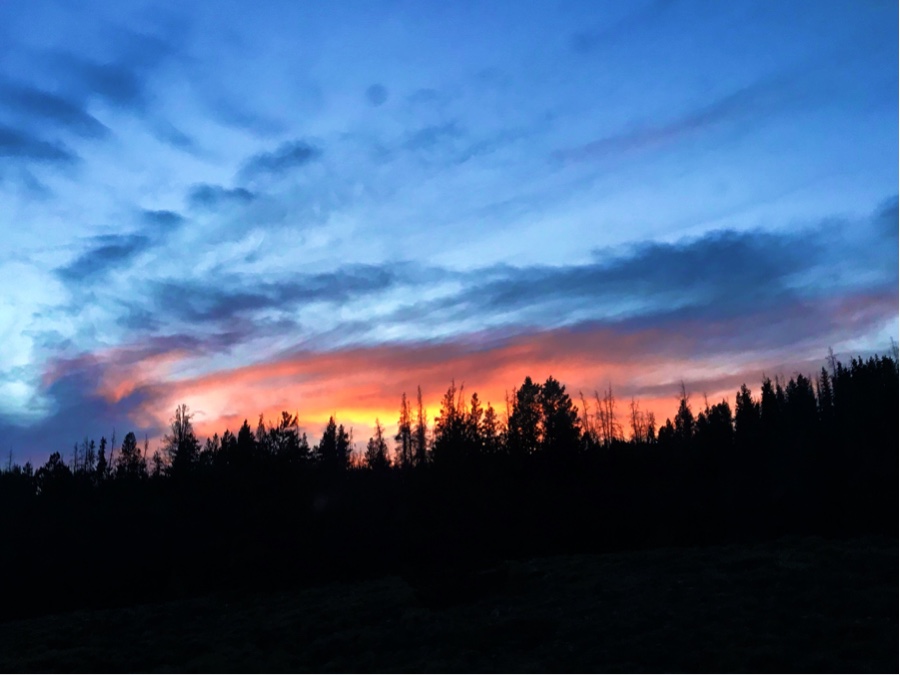 It was breathtakingly beautiful, though. The way the sun was setting and the shadows played across the meadow areas made me long to stop the car and just get out and explore. But I wanted to get out of the mountain pass before dark hit, so I soldiered on. Except the roads! We went so slowly that it was long after dark before we emerged onto the highway. Shortly after we had headed down the terrible road, a vehicle came out of the blue. I could see it in my rear view mirror, but I couldn't see what kind it was. Just the headlights. And I immediately thought of all of the serial killer stories I had ever heard. With a sigh I rolled up the windows, saying it was getting too cold for the baby, and then I kept watch in my rear view mirror just as much as I did the road in front of me. Paranoid much? When I came to a wide part of the road, I slowed down, and pulled over to the side. It was a truck. A white truck. It slowly pulled up next to me, and my heart nearly screamed in relief. It was my dad. He had said he didn't feel comfortable just letting us drive through those mountains alone, so he was going to follow to make sure we got onto the main road.

A jackrabbit bounced around on the road in front of us for a bit. A gorgeous deer was in the middle of the road. As we approached it slowly turned, looked at us, and then ambled off into the woods like it didn't have a care in the world. We got to the main road and my dad said he was just going to go with us to Evanston because it would be faster for him to go home the other way (which was through Evanston) rather than go over that road again! And so he led the way this time and we followed him to Evanston. With him in front, he nearly hit a deer that jumped right in front of his truck. I was glad he was in the lead that time! Meanwhile, Jeffrey had no idea where we were. I had told him we were going to the mountains, and that we were going to be in the Uintahs, and with my parents. I guess he just didn't put two and two together because when I messaged him that we were in Evanston he was shocked and not happy about it at all. Mostly because it was about 10:45 and I had planned for us to be home by 8:30. But we drove on, and we got home safely. I called my parents to let them know we were home, and my dad had just barely gotten back to the camp as well. He hit a jackrabbit on the way and so stopped and took it back to camp with him. He figured they may as well eat it rather than let it sit and be picked at by other animals. So they now have jackrabbit in their freezer. I found it funny that the two animals we saw in our path were such a hassle to my dad. I figure it is because we prayed before we left. I told him that, but he said that he also said a prayer before he left with us, so that obviously isn't the reason. At any rate, it was probably my favorite Pioneer Day in the history of Pioneer Days in my life. I learned about some of my ancestors, and then I got to haunt some of my old stomping grounds with my littles and my parents. The only thing that could have made it better would have been Jeffrey coming with us. But since it is a state holiday and not a national holiday, he didn't have the time off.