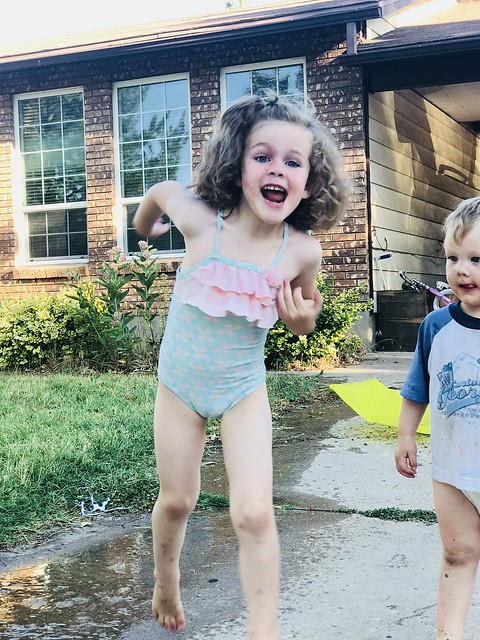 These are just some of the words that have been bashing around in my head, racing to get out. Today was all of those words and so much more!

Kip, as per usual, decided 5 am was a good enough time as any to wake up. Except he still acted sleepy. So I rocked him and sang to him, and prayed. I told Heavenly Father that I really wanted to study my scriptures and the only time I can do that is in the quiet hours of the early morning. I told Him that if I could get Kip to sleep, I would not go back to bed, like I was tempted to do, but instead, I would read my scriptures. Around 6 Kip went back to sleep. And I went out onto the deck with some toast, herbal tea, and a banana, equipped with my scriptures, a notebook, pencil, and colored pencil. And then as I read, prayed, and pondered, I got to watch the sun rise! It was beautiful and subtle and happened all at once. It was dawn, and then suddenly, it was morning and Vince was out on my lap, reading scriptures with me, and stealing my tea and banana.

The morning rushed by. The usual scramble of chores, and fighting about chores, and tricking siblings into doing your chores, etc. 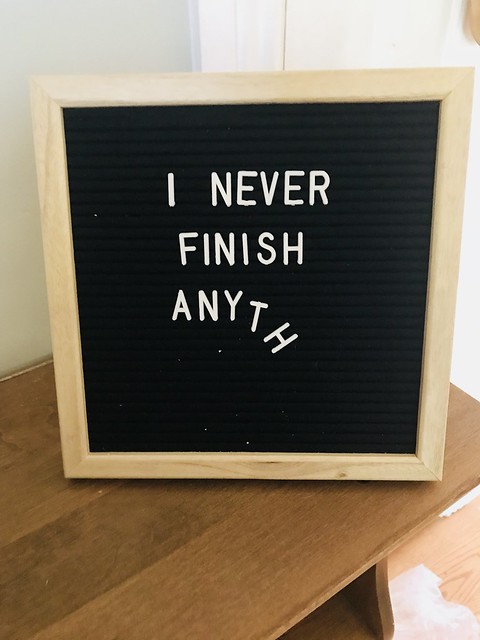 And then lunch time arrived. I don't usually like to do a play by play of my day, but trust me, this time it is worth it. My neighbor came over and told me about a bunch of bikes that were being given away for free, and to see if I was interested in any of them. As we visited in my doorway, Keith was busy in the kitchen making lunch. Macaroni and cheese. I was holding Kip. As we talked, my nose kept sniffing, and sending signals to my brain, but they kept just barely missing. Until finally, I turned around, and saw smoke billowing out of my kitchen! I handed Kip to my neighbor and rushed into the kitchen. The toaster was on the same burner that the pot of macaroni was on, and the toaster and stove were both billowing out smoke, gushing, torrenting it into the air. I quickly pushed it off the burner, turned the stove off, and opened the window. Keith turned the fan on, and I went back to talking with Kimbra. Except as we talked, I noticed that there was a smell that didn't seem right. It was a spicy, not unpleasant smell, but it was so very wrong. It hurt my eyes and my lungs. I again handed Kip to Kimbra and shooed all the kids outside. I ran inside, turned the AC off, and opened all the windows. I grabbed my shoes and my purse, and we were off. Lunch was un-salvageable. I thought about going for a pizza. $5 isn't a bad price to feed all the kids. But then I decided I didn't want any sort of reward to be associated with burning our food, and nearly our house. I called my mom, and we went there. She made us sandwiches.

When we got home, the smell had mostly left the house, and we got busy with the neglected chores. I was determined to not have the house smell bad when Jeffrey got home. We got a lot done, and despite the rough start the kids had this morning, and the unexpected (but welcome, for them) field trip, things were mostly clean when Jeffrey got home.

We had dinner, and then he went outside to work on the sprinkler system. It hasn't been working for about 2 years. Jeffrey worked some magic, and the sprinklers began to sprinkle! I can't even begin to describe the smell that accosted me. When the water hit the hot pavement, and the thirsty grass, it was like a memory, and Summer, and expectations all twisted and rolled into one glorious scent. I breathed deeply over and over again. I couldn't get enough of it! I ran inside and excitedly called the kids to come join us outside, and then Kip and I sat first on the driveway, and then in the hammock as we watched Jeffrey work and the kids play, and helped out whenever we were needed. 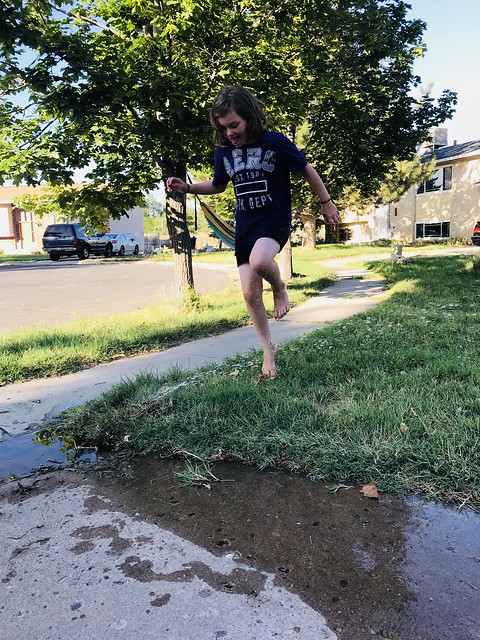 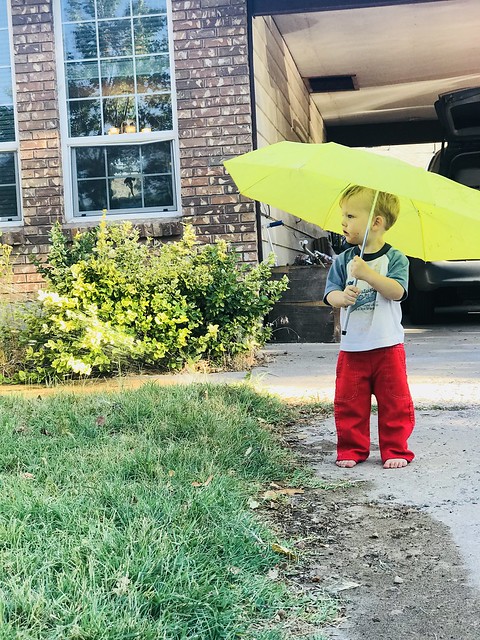 The squeals of delight that emitted from my girls lips when the saw the sprinklers! They quickly ran back into the house and changed into clothes that they could get et in. Vince just didn't care. They ran through the water, around the water, and over the water, but rarely into the water. I sat on the hot pavement and laughed. I want to imprint this night into my memory forever! The sun was at it's most beautiful, the golden hour, and there was such a sweet and gentle cool breeze. I remember at one point thinking how nice it felt outside, and then checked my phone for the temperature. It was 96*. No biggie. Never in my life before have I commented on how nice 96* felt. I had to laugh. 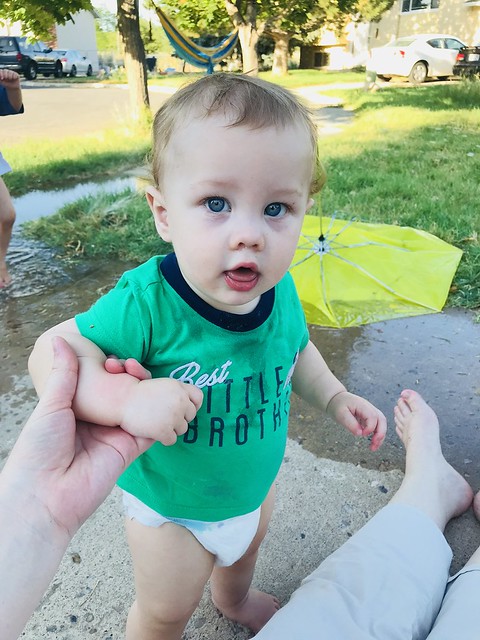 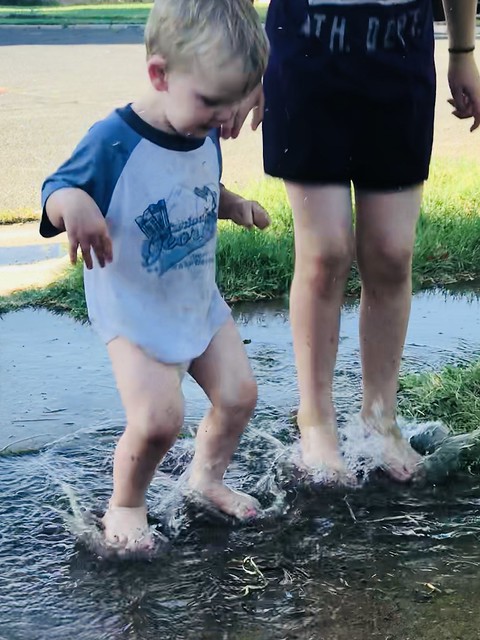 Finally, it was time to go in. The sun had set and the twilight hours were just beginning to wrap its arms around us and remind us of our beds. As we headed in to the house, we stopped next to the milk weed flowers. They are in full bloom and look amazing! Flitting over the tops of the pink blossoms was the most beautiful bumble bee I have ever seen! 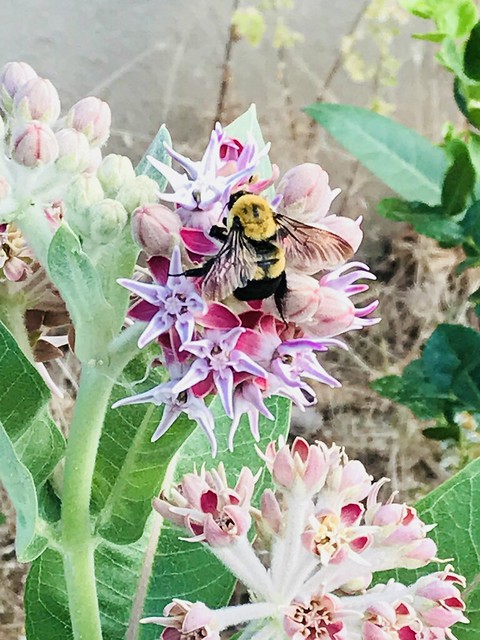 We went in and it was time for bed. Kip hated the water, even putting his feet in it. Regardless, he had somehow gotten very dirty so he needed a bath. I hate bath time with that boy. He hates water so much, and screams and arches his back anytime he gets near water. He is just so sweet and thinks he will melt or something. But the nice thing about forced baths is afterwards, he is just worn out, and typically falls asleep quickly. As was the case tonight.

As I was putting Kip down, Faye decided to be an absolute sweetheart and put Vince down. It didn't work, of course. He is such a little mama's boy. But it was nice that she was reading with him in his bed while I got Kip to sleep. 5 minutes Vince was also asleep.

And then Faye and I went outside to jump on the trampoline.

Well, not just that. See, tonight is a Strawberry Moon! It is huge and brilliant and breathtaking. Except it was hiding behind some trees. So we had to jump on the trampoline to try to get a glimpse of it. None of my pictures turned out though. The moon is so hard to catch! Especially with a phone camera. Faye thought it was the best thing in the world, though. Jumping on the trampoline with her mom at dusk when she was supposed to be asleep. We found the first night star (I think it was a planet) and made a wish. And then we went into the front yard to see if we could get a better view. 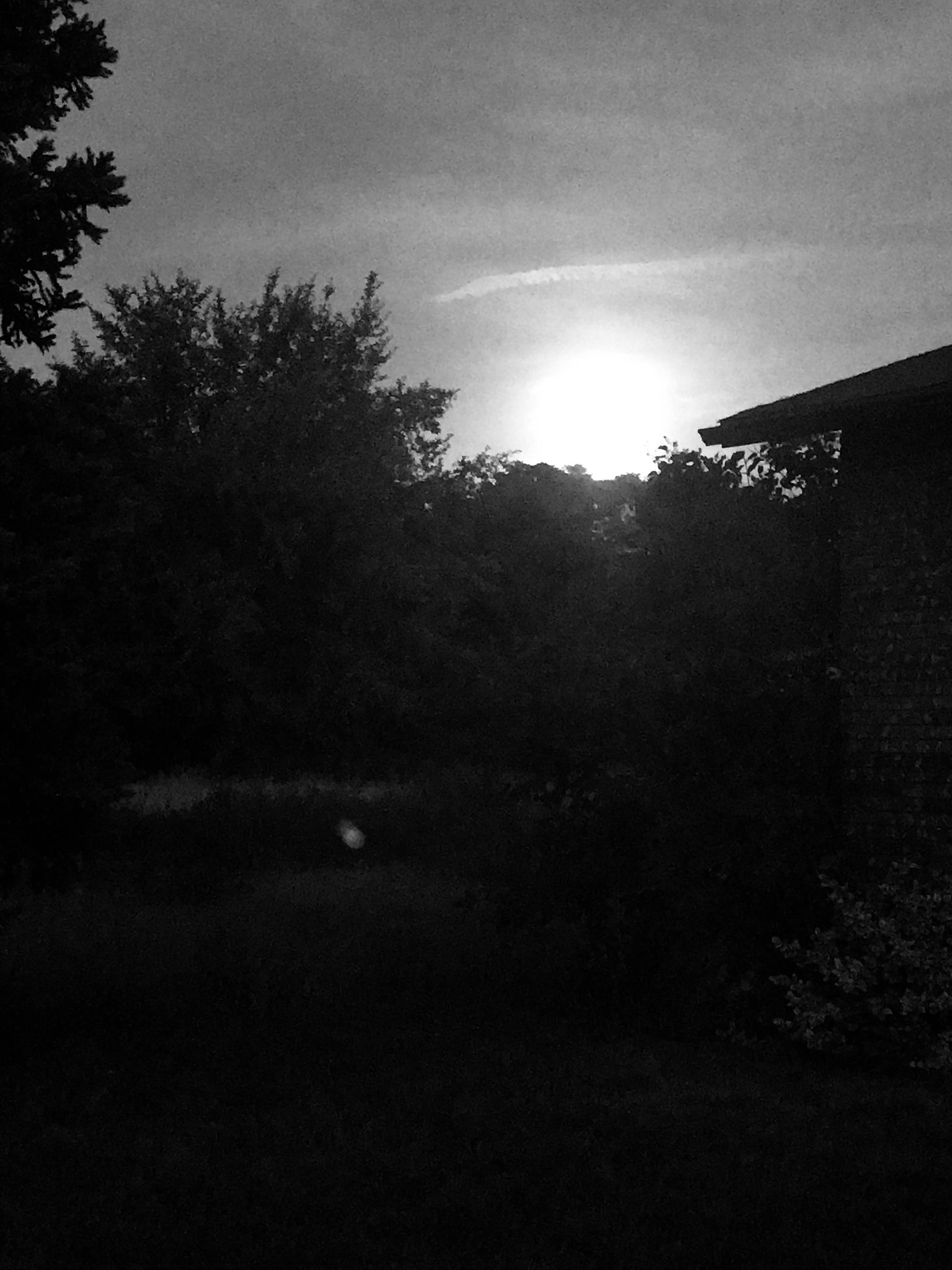 Again, I tell you that words are inadequate. And my pictures are paltry. It is absolutely breath catching in your throat beautiful!