The Walk (said with foreboding) 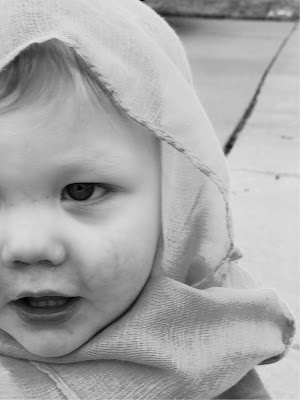 Beth wanted to walk to preschool thursday. So we got everyone bunded up, put Kip in the stroller and Minnie in the doll stroller, and we headed out. My plan was for Beth to push it to preschool and it would be amazing in distracting Vince on our walk home. That was my plan.
On the way there, I had to coax Vince away from every rock garden we passed. He wanted to stop and put rocks in his pockets. Because he loves rocks, and he loves his pockets.
Before we left home, I couldn’t find Vince’s coat, so we just left without it. It has been really nice out lately. I rarely wear a coat right now anyway. He was wearing a fuzzy warm sweatshirt, so i figured he’d be warm and it would be fine. Except we were blindsided by the frigid arctic wind that was attempting to freeze us in our boots. After walking a little ways, I decided it was probably too cold for Vince to not have something to help him stay warm. I took my scarf off my neck and wrapped it arouns his head. He looked so sweet and cute! 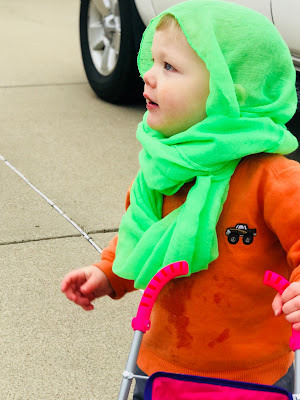 It took much longer than expected because of our many stops, but in the end we got Beth to preschool and everything was going great. Vince found a rock garden and I said goodbye to Beth with a kiss and a hug. I took the doll stroller from her and gave it to Vince.
And then I decided I wanted to take his picture.
I wanted to get down on his level, right by him and take a great picture. And so I squatted down...
Rrriiiipppp.
....
I looked down and my pants had ripped. It was in the thigh area, much less conspicuous than had it been in the back. But still! 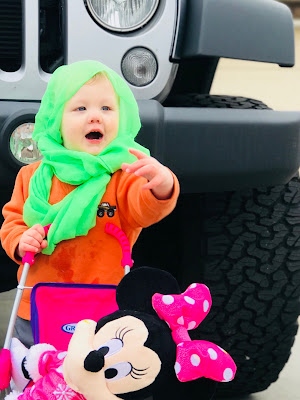 And so I snapped that photo, and tried to get Vince to hurdy along. Except he wanted to explore! It took is 45 minutes to get home because of that doll stroller and the sense of freedom Vince found with it! I was happy to let him explore, except I really needed to get home to change my pants! Except he didn’t see the need. There were rocks, and bugs, and leaves, and some people still have decorations up, including Frosty the Snowman who is real and magical, and frustrating because if he has his hat on why won’t he play with me?! Also, my neighbor has big rocks. About the size of a little boy’s torso. Vince got very excited when he saw those. He tried his hardest to lift them up and carry them home. I laughed, and finally had to forcefully carry that tenacious little dude past the house or we would never get home!
My plan did work, though. He was all kinds of tired out, and went right to sleep. And when I went to hang up his coat, it rained rocks snd pebbles down on me. So it was apparently a succesful outing for him as well.
Creating Memories Health Just like a boy Motherhood Prince Vince