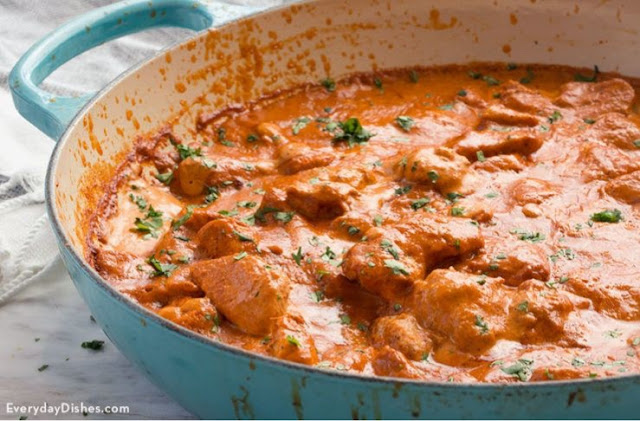 (not my photo. Google image)
I love Indian food. The way the spices meld together and wrap you up in the aroma and flavor is transporting! The absolute comfort food.
A while ago, I decided to splurge on a jar of tikka masala paste at the grocery store. It was a bit out of my budget, but I was really craving some good curry and since I can’t always throw down the time to go to the Indian reataurant, or the money for a meal, I decided to just splurge, live a little, and buy the six ounce jar of tikka masala paste. Besides, only 1-2 Tbsps were typically used to create the sauce, so I could use it several times over, I justified.
After sitting in my cupboards for about 2 weeks, last night I fInally decided to make it. I chose not to follow a recipe, as recipes are cumbersome and demanding. Ha! Not really, but I couldn’t find a simple one, and I didn’t have a lot of time to get dinner ready before Jeffrey would be home from work. I decided to wing it. And recipes are merely guidelines anyway.
I got out 2 cans of coconut milk, and put that in the pot with a scoop full or two of masala paste. My sister in law had given me some curry seasoning for my birthday, so I dumped a few spoonfulls of that in as well, and mixed it all together. And then I let it simmer.
Meanwhile, I pulled out my rice cooker and my pressure cooker. I threw in a couple of chicken breast... and some drumsticks. We ran out of breast and that is all I had left. But cooking is about improvisation, right? I dumped some more curry seasoning in on top of the frozen chicken pieces, and let the pressure cooker do its thing.
I poured some chicken broth and a few Tbsps of butter in the rice cooker with some rice, and then went to play with Vince and Beth while everything cooked.
I also sneaked several... many tastes of the curry sauce, to check for perfection. But really, it was because it was so good, and I couldn’t help myself.
The pressure cooker popped, the rice cooker dinged, and dinner was ready. I called everyone together, and we all sat down, greatly anticipating this comfort of all comfort foods.
Except dinner didn’t go exactly as planned. A few delicious mothfulls through, and I suddenly lost my appetite. There were glass shards in my food. I had tried soldiering on, but after I found a disturbingly large one, I knew dinner was over. 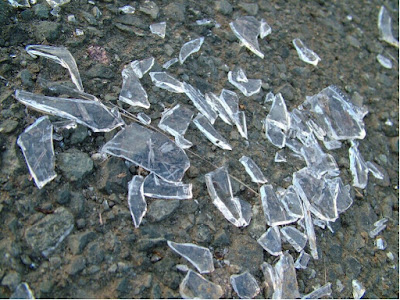 (google image)
What had happened apparently, was that Faye had accidentally broken the jar. But it was such a clean break, it was scarcely noticeable. Also, because it was so cleanly done, no jagged edges or anything, I thought we would be okay.
I was mistaken.

There weren’t many shards, mind you. Nor were they really much larger than a grain of sand. But they were there. Immediately my throat began to hurt. I imagined it had been cut while I unknowingly swallowed. I imagined my insides being slowly torn apart as my body attempted to digest.
And so, with worry tearing apart my sanity, just like the piece of glass I imagined was tearing apart my innards, I set about putting the kids to bed. Beth was an angel and put herself down. I love when she does that. Faye and I sat on my bed while I alternately rocked Kip or Vince to sleep.
Jeffrey and Keith got home from an outing they had gone on, and I put myself to bed, all the while, throat still hurting.
Imaginations of my rush to the hospital, emergency surgery, but it was too late. My subsequent death, funeral, burial, and my kids, growing up without their mom.
I admit, I got a little carried away.
A bit.
Hypochondria at its finest, folks!
Right before I fell asleep, I got up to get a drink of water. I went into the kitchen and saw the slightly broken jar of curry paste on the counter. Waiting for its fate. I picked it up and looked at it, weighing it in my hands, thinking. Oh how delicious it was! Again, the memory of the flavors wrapping my tongue in a big hug came to mind. Also, my whole morbid play in my head flashed through my mind.
And then I threw it into the trash.
Because $5 of curry paste is not worth $100’s in doctor bills, or my children growing up motherless, no matter how delicious it was!
The good news, though, is that Jeffrey has already made a request for it again! Just not laced with glass from a broken jar next time.
Oops!
***It is important to note, I am not a hypochondriac. I am not morbid. I didn’t dwell on those thoughts, I merely let them come, pass, and then I laughed at how ridiculously melodramatic it all was.