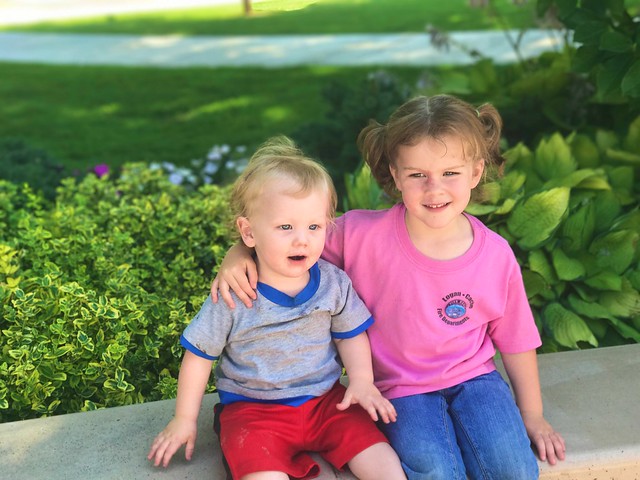 I am happy to report that I haven't yelled at my kids yet. I have been tempted, but I haven't done it. Lesson learned, for the moment. I say for the moment, because I really feel like I have learned this lesson before.

There have been times, the past few days, when I have had to take a deep breath and just walk away. Like the time I asked Keith and Faye to get something from the living room for me, and the kids decided the floor was lava and were scooting the piano bench across the wood floor, like it was a canoe across a lake, the broom being their oars. I wanted to go out and yell at them and lecture on the damage they were inevitably causing to our floor and broom, but instead, took a deep breath, told myself it didn't matter in the long run, and made a decision to let them be. Because they are kids, and sometimes they need to have fun without mom coming in and being tyrannical.

Today was lovely. I had gone to bed at 9 last night. I had started a post, but fell asleep about a sentence into it, I was that tired. I decided I wanted to take the kids to a Dinosaur Museum. Vince has been so much in love with dinosaurs lately, how could I resist? He wants to alternate between his 2 dinosaur shirts every day, and he insists that his hippo pajamas are really dinosaurs. He actually got really mad at me tonight when I told them they were hippos. He pointed at one and said, "Dinour! Rawr!" It made me laugh. I corrected him, he corrected me, and then I said, "Okay, dinosaur." He then muttered for a few minutes more, while pointing to the hippos, "Dinour. Dinour rawr." It made me laugh.

I got my room cleaned up. I have been trying to do it for a few months now. I know that sounds terrible, but life was just so busy, and I was so tired by the time the kids went home, that I never had a chance! The other kids would go home, we would have dinner, and then it was time to start getting ready for bed. By the time I got the last kid to bed, I just didn't have the energy any longer to do anything else. Sometimes I would get the kitchen clean, but more often than not, it would have to wait until morning, and I would rush around to get it done before Brickale brought the kids again. And so, my kids would bring all their stuff into my room. They would bring their food into my room. They would get crumbs all over the floor, and I felt so gross and dirty, I would let some of the other things I needed to do fall by the wayside because I was distracted and just couldn't do them in a messy room. I couldn't concentrate or feel creative in a mess like that, and it ate at the back of my brain that it needed to be cleaned, so other things, more fun things, were completely ignored. However, this morning I woke up refreshed, and tackled my room. It feels like home again. I cleaned out all my clothes that don't fit right now, and all the shoes I haven't worn in years, and I made one box for storage and one box for the DI. I'm having a lot of fun de-cluttering!

And then we set out! I had a couple of errands to run, and the kids were so good and patient while we ran them. And then Keith reminded me that he was supposed to play with his cousins this week. I called my sister in law and although it was impromptu, we set it up that I would take the kids to her house, and they would keep her kids busy while she did some work, and Keith and Faye would have a lot of fun with their cousins we don't see often enough.

Since we were already headed up north, I decided we were going to just continue on, and see where the road took us. It took us to Gossner Cheese in Logan. I have been having some serious heartburn with this kid. Like, I am not really eating much of anything because everything is giving me so much heartburn! But I remembered that cheese seems to help it. And squeaky cheese! Need I say more? Also, driving through the canyon would make Beth so happy! As we drove, anytime she saw an outcropping of houses, she would squeal and say, "Mommy! I see the village! I see the village in the Mountains!"

I'm not sure I mentioned, but Heidi (the little girl in the Alps) is her favorite story and show. There was a very cheaply cgi show on Netflix that she absolutely adored, but they took it off and it made her so sad. But she loves the mountains, and goats now. Those are both things I love dearly, so I am not complaining, although my love for them came from a means not Heidi (by Johanna Spyri) centered.

We got some strawberry milk, too, because why not? I love how such little things make such a big deal to her. And every time the cheese squeaked as she chewed it, she would squeal with joy and tell me that it was squeaking in her ears, or in her head. Vince just sat in his rear-facing seat, throwing his hand up and grunting every few minutes, his lazy way of indicating he wanted more. That kid just makes me laugh so much! Both of them, really. And then, since we were already so far north, we figured we may as well make a real trip out of it, and we went to the cookie factory, aka Pepperidge Farms outlet. I decided having lots of easily accesible snacks on hand for after the baby was born would be a good idea. And this would most likely be the last time I go on an excursion like that before little man is born, so I may as well make the most of it! 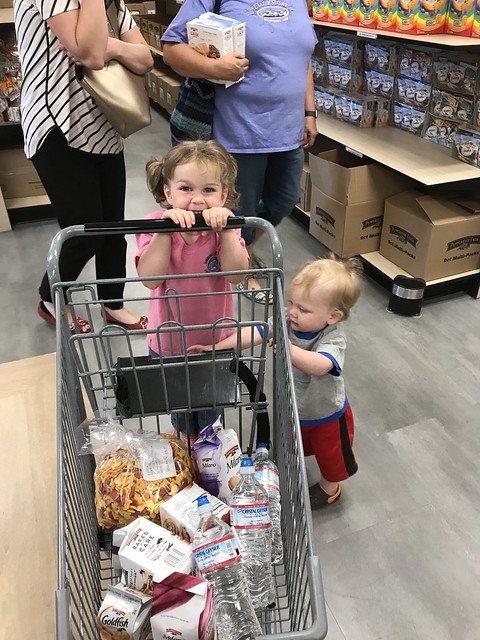 Those two are so happy, and obedient, and such a joy to be around, and I loved every minute of being with them. I wish Keith and Faye didn't fight so much, because it was such a lovely afternoon, and I found myself thinking with longing of the day when school starts for them and I can spend so much time with the quiet happy ones. After we got some goldfish and cookies, we went outside and Vince and Beth played in some rocks in the shade. I changed a diaper, and then let them run around for a bit. We had been sitting in the car for a very long time! 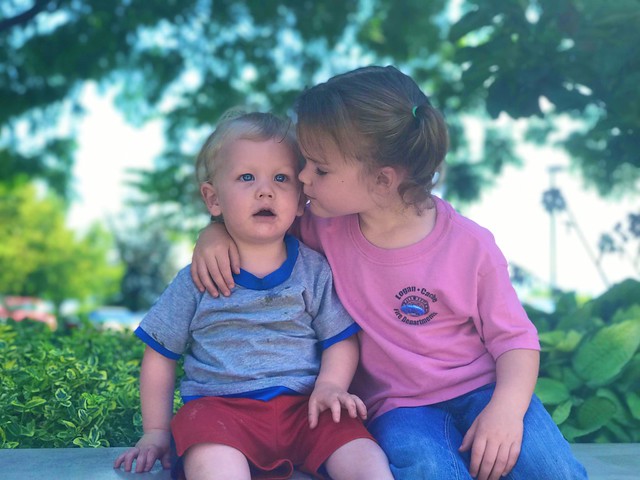 Beth found a rock with a divet in it. She told me it was the Fairy Queen's throne. We found a storm drain in the grass and Vince tried to throw rocks down in, but the rocks were too big. Beth told us that it is a portal to another world. You have to go through there to get to the fairy world. Don't be afraid of the water that we see through the grate, it isn't really water, it is just pretend water to scare people away so they will leave fairy land alone, and only the true believers can enter.

That girl has an imagination that is so often overshadowed by her older siblings I sometimes forget how vivid and sweet it is. We drove back through town, and Beth got excited when she saw the temple. She asked if we could go look at it. I wanted to say no. I wanted to say we had to get home, so we could beat Daddy home so he wouldn't worry about us. I wanted to list all of the reasons why we just didn't have time. I decided we would drive up to it, pass it on our way home. As we got close, it looked really crowded. There were cars lining the street. I said in my mind, "if we can find a parking spot, we will get out and go walk around."

We found a parking spot. In the shade. Up close. Obviously, it was meant to be! 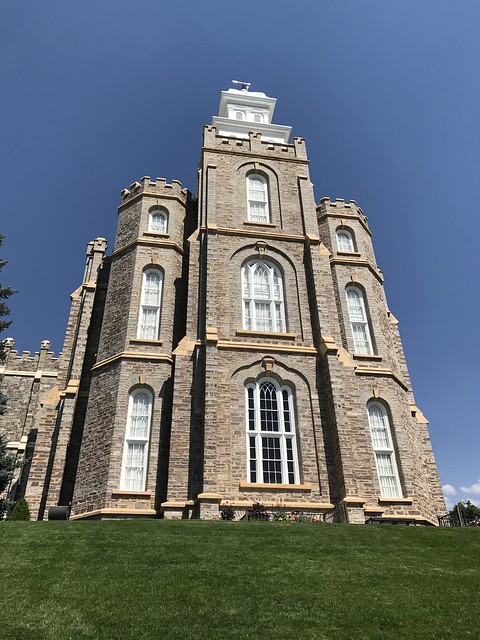 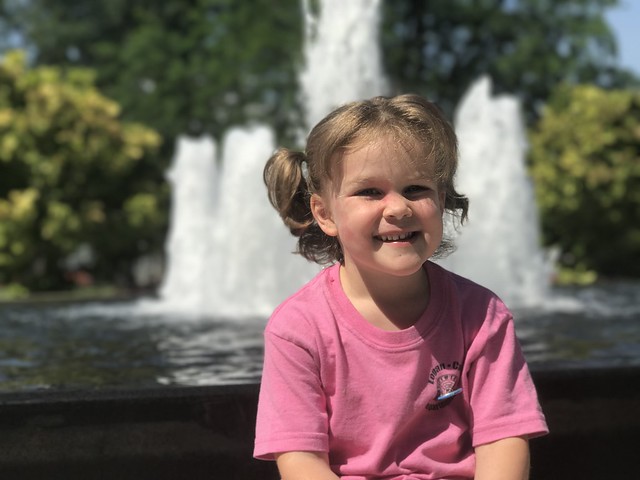 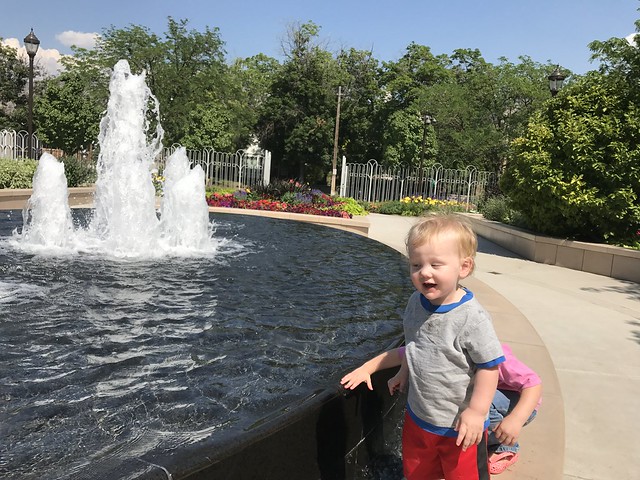 I got some great pictures of the two. Beth decided to give Vinny a kiss on his cheek while I was shooting photos, and she posed herself with her arm around her neck, and my heart may have melted right then and there. The 100* heat couldn't do it, but the love a little girl has for her little brother just made a big puddle of my heart we had to be careful to not step in. We walked all the way around, talking about the day I married Jeffrey and how cold it was, and how we didn't get any pictures because who wants to suffer in -6* cold just for a lousy picture? We talked about how the temple always makes you feel warm inside your heart even if it is cold outside because it is Heavenly Father's house. It even says it on the outside of the temple. House of the Lord. We talked about one day when she would get to go inside and how I will go with her, and it will be such an exciting day! She told me she is going to marry Vince there, and I told her she can marry anyone she wants, but not her brother. He will come to her wedding, but she can't marry him. 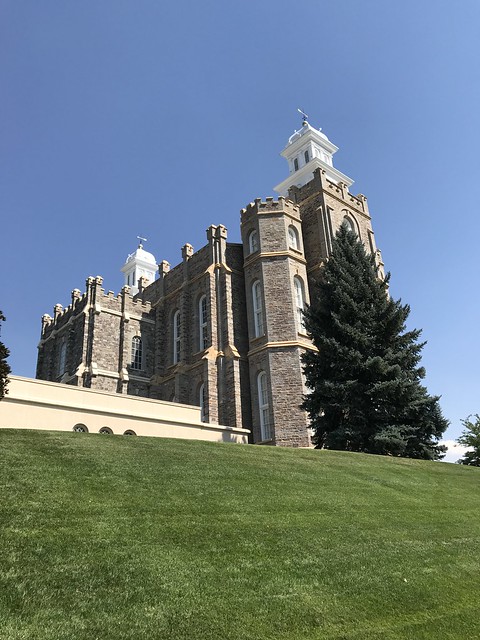 And then we were back. And we were all dripping. But we got into the van, and we drove home. Jeffrey was going to go visit his sister and pick up the big kids after work, so we just went straight home. It was such a sweet day, the kind you want to freeze forever in a snow globe. Except without the snow. As I was helping Beth get ready for bed tonight, I told her how much I loved spending time with her today. She wrapped those sweet little arms of hers around my neck and told me she loved it too. And then she closed her eyes and fell asleep.

I say! I wish every day could be as picture perfect as today was. It is so much easier to cherish and love the moments when they aren't filled with bickering and pestering. I found a daily schedule that Keith had made for himself. #3 on his list, right after eating breakfast, he had scheduled in an hour of "bug Beth." What?! Sometimes that boy is so naughty, I just don't know what to do with him. He really seems to delight in making her scream. I am really going to miss the help and the fun conversations I have with Keith and Faye once school starts, but I am really going to enjoy the peace while they are at school! 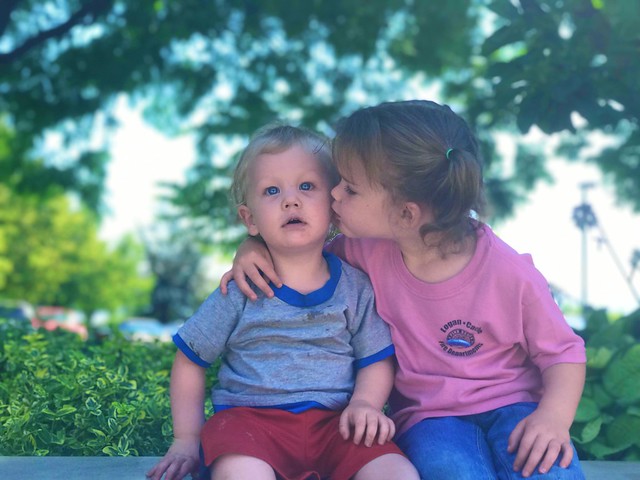