The Day the Van Died... and what came of it 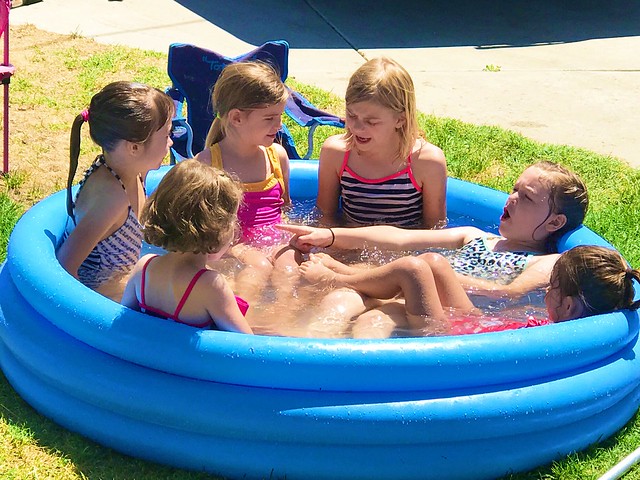 "Hey, I need your address. Kirk is on his way but got a little lost."

She, being the wonderful friend that she is, decided to step in and offer the services of her son when she heard me lamenting over the state of my yard, and the difficulty I have with mowing it due to watching kids nearly every day, and also being very allergic to grass. He was coming over to mow my lawn for me, and to play with Keith. Both things that are a huge help to me!

Very groggily I rolled over. It had been another rough night. Vince just hasn't been sleeping, and so I haven't been sleeping. The kids I watch don't usually get here until around 10, so I was hoping I would be able to get at least another hour of sleep with Faye watching and playing with Vince. But I think it was a fair trade off. I was groggy today, but I would get a freshly cut lawn out of it! Before I got out of bed, though, my mind rolled back through the week and I sighed deeply. I haven't been the most patient person this week. Most likely due to lack of sleep because of my little man. I have felt terrible about this! I catch myself yelling at the kids. My voice filled with anger and dread, and as I am yelling, I am thinking in my head, "why on earth am I yelling? It is only an open door. They don't mean any harm. They are just little kids. What is wrong with you? Stop yelling already!" But I don't. I keep yelling, and the second the kids leave the room, (usually very confused as to what my problem is) I am back to normal. I have been so frustrated about it, and have felt deeply ashamed of my behavior! So this morning, before I even got out of bed, I said a pleading prayer. I told Heavenly Father that I really needed help today. I was SO tired, I didn't know how I would be able to function. I hate being like that, being the Big Bad Wolf with the terrible voice, and I really really needed help to get through my day. I may have begged just a little. And then I got out of bed and rushed around getting dressed and trying to straighten up a few things before Kirk got here.

He mowed my lawn and it looks fantastic! I am so grateful. And then he and Keith played happily for the rest of the morning.

The kids came, and I was told the girls would only be staying an hour as their grandpa would be taking them swimming! And then Jack went to sleep almost immediately. I felt a huge surge of gratitude. Already my day was shaping up so that I wouldn't be terrible. Not that those kids make me terrible. I am not saying that at all! They are really good kids and I love them so much! But having less kids really made a huge difference. Keith and Kirk were entertained, and Beth and Faye watched them play, so I really had time to myself, which is an extremely rare occurrence! I got some lunch made, no hassle, and Jack woke up, right after I put Vince down! I got the kids their lunch, made myself a salad, and then let them entertain themselves while I savored the rare alone/quiet time I had. I had been alone for not even 5 minutes when the baby's dad showed up to take him. He had gotten off work early!

It was then decided. As soon as Vinny woke up from his nap, we would take Kirk home, and stay to play in the water.

As I was driving over to Lisa's (after the 2 hours of looking for towels, bathing suits, etc.) I noticed the battery light was on. It wasn't flickering as it had been for the past week. It was solidly on. I asked the kids to say a prayer that we would get there alright, visions of 2 weeks ago being stranded on a busy road were prancing through my head, and Faye asked if she could say it. She said such a sweet prayer, and we got there no problem!

And played outside in the water all afternoon. 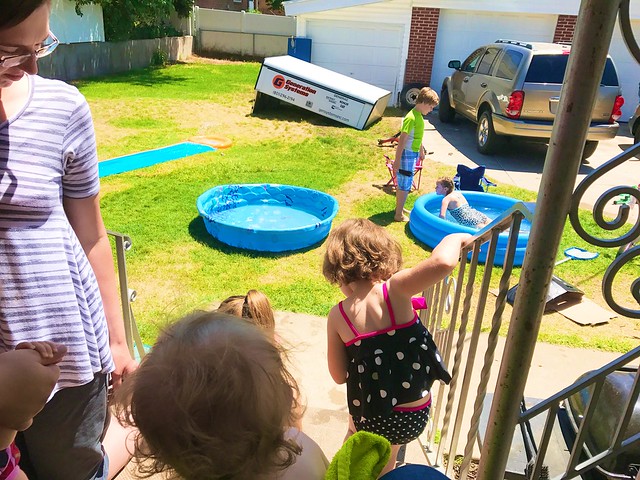 Around 5 I decided it was time to go. They had to get some errands done, and they needed dinner, and my kids needed dinner, too. We piled everyone in the van, and started to back out their driveway.

Except we only got half way out. The van died. Right next to their house, like a cork in a bottle. No one was getting in or out of there. Nor was I! Lisa got her husband to come look at it, and it was the alternator. Funny enough, our replacement alternator arrived today, and I had the thought to put it in the van, but then decided that was being a bit too presumptuous of me, and so didn't. I wish I had! After what seemed like forever, between getting Jeffrey there with the alternator (which, keep in mind, getting a hold of him is tricky because he doesn't have a phone), and Paul having to pick up his truck, there was a lot of waiting time, they finally got the new one in, and everything is looking great. Paul did mention that I should stop by to let him check it out again, later. Lisa and I laughed and reminded him I would probably be there next week. Lisa is going to have a baby any second! I will be there to help her where I can.

I am quite frankly amazed, though, at the way my prayers this morning were answered. I believe I was blessed with more patience, but at the same time, I didn't have quite as many kids around to test my patience, either. My own children do a wonderful job of the testing of the patience, every day, though, lest this should be misleading. It isn't who is here, it is the fact that there were so many! What a tender mercy right there, though. And then, how we got to Lisa's house. Paul had said it was a miracle we even made it there, and they only live across town from me. Also, how quickly I was able to get a hold of Jeffrey. That Paul happened to be there when my van died. That it died in their driveway instead of on the busy road. That my kids could play with her kids in an air conditioned house instead of stuck, sweltering, in an unresponsive vehicle in the middle of a busy street. That when we got home with a working van, all of the kids wanted to just go to bed.  In so many ways were those prayers answered!