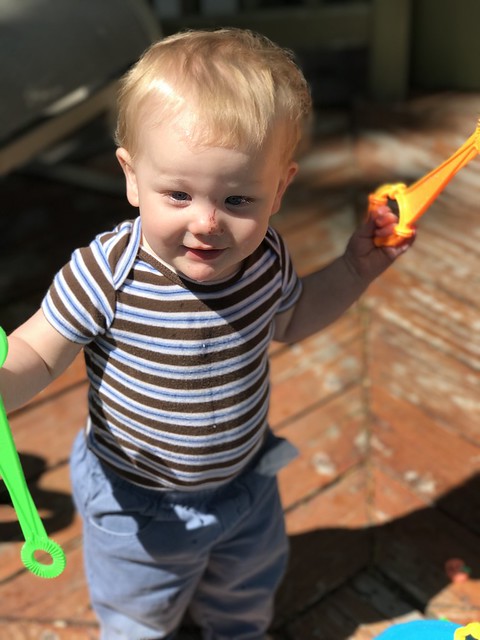 12:25 am. I was dreaming about strawberry fields and a Victorian strawberry picking party. The lush ruby fruit making a rewarding crunch each time on of our party bit into the fruit, leaving  little rivulets of crimson jeweled juice dripping down our lips. I could just taste the tangy sweetness.

12:27 am. Vince decided there should be a party going on, and he should be in charge. With mighty authority and command, he summoned me into his room. Reluctantly, groggily, my feet hit the floor and I shuffled into his room, praying that I would be able to get him back to sleep quickly. Vince had other plans.

1:45 am. I lay in my bed, glazed and flaming eyes glaring at the ceiling, wide eyed, and seeing nothing. Vince was NOT going back to sleep. He tossed and turned, his feet kicking my jaw, my neck, arms flailing, grunting, and fingernails clawing at my face, my mouth, only half consciously seeking for comfort, and pushing away sleep. I sighed and decided to maybe get him some milk. If nothing else would work maybe the tryptophan would help to get the sultan back to sleep.

2:15 am. Vince and I sat in the living room. Him curled up in my arms, nestled into me, his blanket pulled up around his neck, snug, just the way he likes it. His eyes were still open, but not as coherent, not as seeking and searching, but more mollified now. I hummed several different lullabyes to him, rocking him and letting the moment just ooze into my heart, becoming a part of me. The darkness was no longer foreign or annoying as it had been as 12:25. It was friendly and welcoming. There was no moon last night, or rather, the tiniest sliver as the moon waxed from its new moon state. But the sky was plenty bright, celestial light shining in through my windows, reflecting off of my floors and casting such a lovely other worldly glow throughout my house, eradicating the need for lights. I was reminded of why I named our home Moon Hollow. It just seems there is a pocket of permanent moonlight here, all the time. Even when there is a new moon!

3:30 am. I was awake. It was quiet. Vince was awake but mostly content to be swaddled and cuddled, his warm body curled into me. A cocoon of lethargy and peace. It was a rare moment for me. I thought about doing laundry. I thought about laying him down, going down to the laundry room, and in the quiet of the witching hours, I could get a head start on my day that would come in a few hours. But as I moved to act on that impulse, Vince whimpered his disapproval, and so I stayed where I was. I opened one of my book apps, and found Fahrenheit 451 by Ray Bradbury. I was in the mood for some Bradbury. I really love his writing style. And so I settled into my reading chair, baby in my arms, the faint orange glow of the night vision from my app, and the swirling words of Mr. Bradbury. In a word, bliss.

4:00 am. I decided it was time to try to lay down. I had read to the end of the sample of my book (so tantalizing! So unfair!) and the realization of the impending morning was dawning on me. I went back to bed and glowered at Jeffrey who was so oblivious to my completely sleepless night. I put Vince in between us, and tried to drift off to sleep.

4:30 am. A sudden kick in my nose, like a viscous realization, startled me from the restless sleep which had overpowered me. I looked over and Vince was sleeping. He was actually sleeping. Shhhh! I slipped my hand beneath his completely limp body and rolled him into my body. He sighed deeply, but not discontentedly, and I stood up, his familiar form fitting perfectly into my body. I crept into his room, and gentle, so very gently, laid him down in his crib, with the skill of Indiana Jones robbing an historic artifact. With cat burgler like stealth I slid my hand out from beneath him, and held my breath.

He took a deep breath, and began to cry.

It was 4 flippin' 30 in the morning! I hadn't really slept all night!

I crept out anyway.

And he did stop crying shortly after that.

Morning came too soon today, though.

It was just like having a newborn, without the newborn.