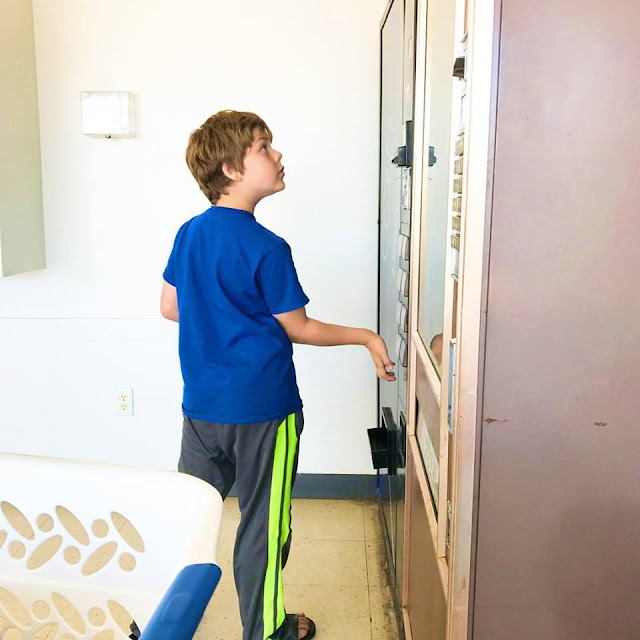 Today is a reminder as to why I struggle to blog. It is a full day, busy, and it never stops.

I didn't tend the little kids today, and so it was my errand day.

We got the chores done this morning, and after Vinny's nap, we took off. We grabbed some food for lunch and then went to the landromat so I could wash my bedding. Faye had tried to be helpful the other day, and she decided she was going to change Vince's diaper. Except all she did was takeoff his diaper, see that he was poopy, and then bring him to me, and set him on my bed, on my lap. I was in bed. He and I cuddled for a little bit, and then I thought it smelled odd. And then Vince stood up and I saw that his bum was covered in poop. I gasped, laughed, and called Faye to bring me some wet wipes immediately! Of course I first cleaned the baby as best I could, and then I tried to get the comforter clean, but it wasn't easy. And it is too big to put in my washing machine, so to the laundromat we were forced to go.

And the kids had a blast!

They discovered vending machines and were so confused by them. "What is this? How do you get the food out?"

For a while, we were the only people in the whole place, and they all had so much fun running around!

It took a bit longer than I had expected, but my sanity was still intact when we left, so all was well.

Next on our list of errands was the auto store.

I am beginning to really distrust all auto places.

Two weeks ago I took the van in to have the oil changed. They said that the battery was in great shape. I mean, they specifically told me that the battery looked great. They were very specific about that. The next day, the van died in the middle of Main street and Antelope (2 very busy roads). I was in the turn lane, and it just shut off. It was a little bit stressful, but quite the adventure, and the kids thought it was great! I went to the auto store which luckily was right there, just a little bit past the intersection, and they tested my battery and said that whoever had told me it was good was either lying or didn't know anything at all about cars because it was very obviously a very bad battery. He then checked the alternator and said it looked great. So I bought a new battery and went on my way. However, ever since then the battery light had been blinking on and off every few seconds. It made me very nervous. And then the AC started to really only blow in surges, when the battery light wasn't on. I was getting a bit anxious because of it. So I took the car to the auto store, thinking the battery connection might not be good, and they said it looked great. The girl then checked my alternator. It is bad. She said that it isn't sending a charge to the battery. Seriously! I am tired of being told everything is fine when it isn't! From now on, I think I want to find someone I trust to look at it before I take it in to see someone else. On the bright side, at least they aren't charging me for things that aren't necessary. But it is still dangerous to be driving around with a bad battery and bad alternator. I really wanted to go up into the mountains today (a high of 68*!) but I didn't trust the van because of that battery light!

And then, we went to Macey's, my favorite grocery store. We walked in, and while I was getting Vince buckled into the car of the cart, Faye casually leaned against the glass doors. All female James Dean like. Except she wasn't as slick as he was, and the door actually came disconnected and broke away from the frame! She was mortified! We went up to customer service, and I made her tell them what happened, and apparently it is an easy fix (I figured it would be. She doesn't remember, but she did the same thing when she was like 2), but I felt it was important for her to fess up to her accident. Teaching life skills over here, yo! We wandered the store for about 5 minutes and I could not, for the life of me, figure out why I had needed to go to Macey's! I racked my brain, and kept coming up blank. Adrienne has been out of town FAR too long and she is my Macey's buddy. We like to do our grocery shopping together. Even if I didn't need anything, I could usually just wander with her and then that would jar my memory. But today I was drawing a blank. So we got some drinks, wandered over to the bakery and they got some cookies from the sweet lady behind the counter, and we left.

It was an eventful, and yet very uneventful day.

I am pretty excited about our new oven that is coming, though! See, ours just up and died about a month ago. About 3 weeks ago we had a repairman come in and check it. He said the control board was fried. It would cost more to replace it than it would to get a new oven. Since then, Jeffrey has wanted to be in charge. But I have some very definite opinions on my kitchen appliances, and so I had stressed him out with all of my demands. I wanted a glass top because Jeffrey spills a lot, and I grew up with the coils, and having to clean the metal things beneath them, and having to lift the whole top of the stove, and it is such a pain, and I KNOW if we got that kind of stove, I would have to clean it out all the time, and I also know, that with 5 kids, I just wont have the time or energy! And so a glass top was pretty important to me. And I prefer self cleaning, but I could live without it if I had to. Jeffrey finally just said, "this is your budget, go find a stove you like."

And I looked, and I searched, and I scoured the internet. I found one that we liked from Lowe's, but after the price, they added tax, and a old appliance removal fee, and none of the required cords or adapters were included, and so after all was said and done, it was just ridiculously expensive. I was getting frustrated and so I said a little prayer that I would be able to find an oven that would serve us well, and that I would like. And then I thought to look at RC Willey in their scratch and dent section. I called to see if they had anything and the man I spoke with said they had 2. One was in our price range. It was black and silver, glass top, and self cleaning with a tiny 1 inch dent on the top. I told him I would take it. I rushed down to the store, got there 2 minutes before they closed, found the stove, didn't even really look at it, just told him to get the paper work, I would take it. And then he absolutely made my night. He pointed out the self cleaning option on it. And then he said, "oh, look. It is also a convection oven if you want it to be." I had been so sad and had resigned myself to the fact that we couldn't afford another convection oven right now. Not after having to buy a new vacuum 2 months ago, or a new car battery last week, or a new alternator today. So the fact that I found a CONVECTION oven, completely on accident, in my price range really was Christmas to me!

Prayers are answered. Even little tiny hurried ones. Even ones that in the long run don't matter except for a little extra happiness for us, prayers really are answered. Just saying.