June 26, 2017
The kids had a meltdown today. I tried to return them to the factory, but apparently their models are no longer being supported, and so there is no return/no exchange policy in place for them.

When I say the kids, I mean each and every single one of them.

Except Vince. He is a sweetheart still. He hasn't developed attitude yet.

Basically, what it boiled down to was he was upset because he didn't want to do his chores. I had asked him to sweep the floor, and he didn't want to do it. But he was making it about everything else. I realized that I could do two things with him. Either I could talk through things with him, and he was in a downward spiral of negativity, or I could let him be miserable and try to teach him some life lessons. And so I decided I was going to try to teach him today. Besides, he was so tired, that there was nothing that would get him out of his cloud of despair and negativity. And so I told him he could be as upset or as happy as he chose to be, it was up to him, but he still had to sweep the floor. He said that he couldn't and that he was bad at it, and I told him that is how we get good at things. By doing them over and over, even if we are bad at them. If at first you don't succeed, try, try again. He was upset. I was firm. He said he couldn't do it, and I reminded him of both his viking and pioneer heritage. We can do hard things, and we can get good at it by trying. I told him I would be right there with him to tell him how to do it right.

And then he proceeded to have a panic attack.

Over sweeping the floor.

I have never witnessed a panic attack before, but I am fairly certain that is what was going on. He couldn't breathe, and was clutching his... just between his stomach and his chest area, saying that it hurt. But he was hyperventilating, so of course if he wasn't breathing properly he would get a stitch in his side! I had him sit down and breathe for a minute, and then when he was breathing better, I made him get up and get back to sweeping. Why the boy thinks he can just sweep around things instead of picking them up or moving them just baffles me. If there is a table cloth on the floor (why oh why was there a table cloth on the floor?!), you pick it up, put it away, and then sweep the floor where it used to be, instead of just ignoring it and going around it. Seriously!

And then, after half an hour of what should have only been 7 minutes tops, the kitchen was finally swept. I could see that Keith was still struggling, though, so I made him some Postum and sat down to read to him while he drank his drink. I also gave him a multivitamin. It really seemed to help a lot as he calmed down, ate lunch, and then went out to the hammock in front, and promptly fell asleep. 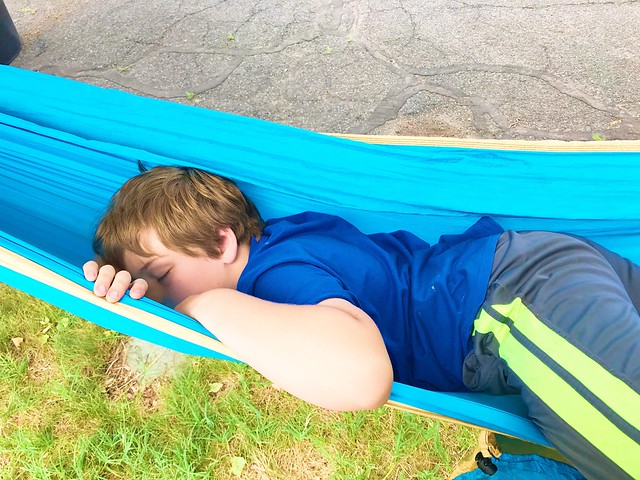 And then, because he got his jobs done, I let him go play at a friend's house.

Faye wasn't too bad. Considering. I did ask her to get the bathroom cleaned up today. Most of the mess in there was hers anyway. I asked her around 9 this morning. She finally got it done around 4:30 this afternoon. She has developed a nasty habit of ignoring everything I say. She loves to make fortes or beds all over the house, and I am so tired of cleaning it all up. She says she will, but she never quite gets it. And when she does clean it up, she does so by just throwing the blankets and pillows into another room. Today I heard her talking to the other girls about making their beds. I called her upstairs and told her quite clearly that she was NOT allowed to do that. And so, of course, she went down and did it anyway, saying to the other girls, "It's okay. We'll clean it up later." Which got her into a swift time out!

Eventually, though, she and Brynlee just played with the blocks and were mostly happy together today. Which is a rare occurrence! 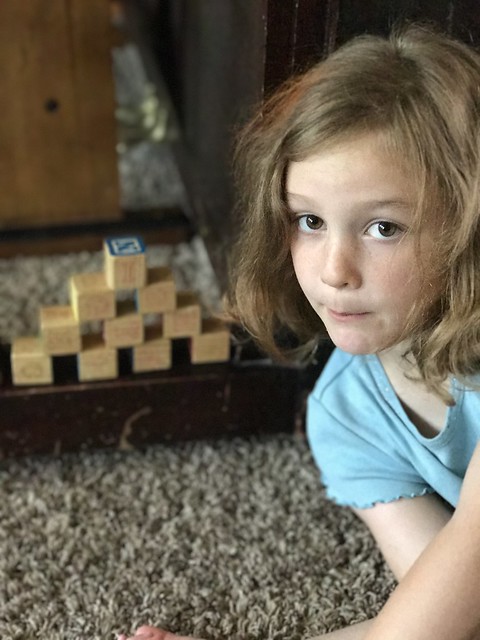 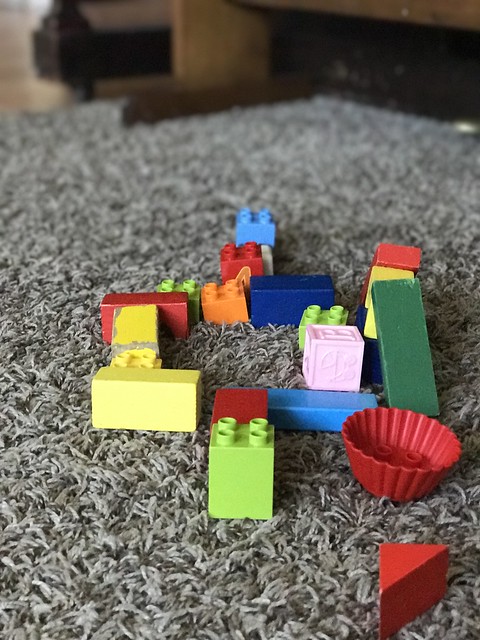 And then there was Beth. She was just on one! Yelling and screaming about everything! She would honestly just test me, to see if I followed through. I was trying to get Vince to sleep and she kept screaming (she was in time out). I sent her to stand with her nose in the corner because nothing else was working. She went to the corner and began to play with that noisy door stopper. The one that twangs and vibrates, and is a magnet for all kids and cats. 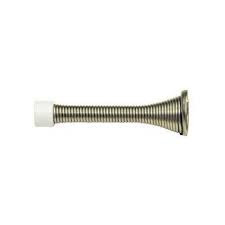 I love that she wanted to play with it, but it was noisy, and I was desperately trying to get Vince down for his nap! I told her she needed to stop. She didn't want to. I told her again, to stop. I explained why. She didn't. And so finally, I told her I would have to spank her bum if she didn't. She stopped. I stood up, carried Vince to his room, and just as I was laying him down in his crib, I heard it.

Because that door stopper is attached to the wall that is shared with Vinny's room, it was incredibly loud in his room. I gently laid Vince down, and then RAN down the hall and back into the living room. She was laying on the floor with her bum in the air, and for the first time in her life, I spanked her. I felt terrible about it, but nothing else I said was even remotely effective. But she didn't do it again for the rest of the day.

Later she got time out again, for climbing into the window down in the family room. She knows that isn't allowed. And so she sat in time out and screamed. SCREAMED! I tried to ignore it. That is what my sister, the counselor, says to do. But it was so loud! I had to pull out the hot sauce. But the thing is, I told her if she kept it up, I would put hot sauce on her tongue. And so she screamed louder and more! I swear she is just trying to test me. Of course, she got hot sauce on her tongue.

Sigh. It was a rough day today.

Jeffrey called me when he got off work. He asked how I would feel about going out for burgers for dinner tonight, instead of cooking something. I was so relieved. I just didn't want to deal with anything, anymore!

And so, we went out, got dinner, and came home.

I once told Faye that all of my grey hairs are caused by the kids. One day when I was frustrated and yelling at them, she asked, "Mommy, are you growing white hairs right now?" I lost it. I busted up laughing and couldn't remember why I was yelling. Today, Faye asked me how many I have. I have no idea, but if my theory is correct, I should be completely Celestial Haired by the time I am 50!
Beth Faye Keith Learning Motherhood