Light, Heat and Pee but not necessarily in that order. 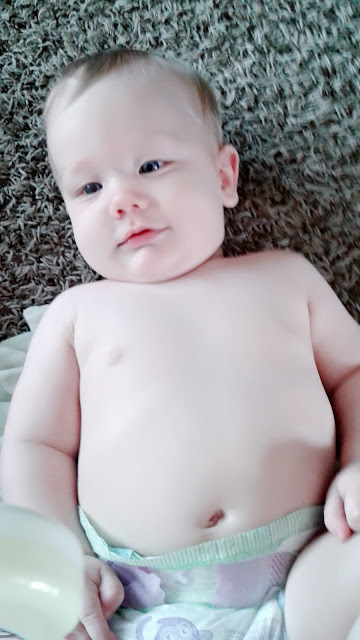 This morning I woke up to a cold house.

This is wonderful! We have not had to turn our heater on yet, and it was exciting to hear the rumble of the heater and the smell of the first heat of the season. I don't know why I love that smell so much, but I do! It just makes me warm and feel comforted and safe. I looked at the clock, and it was just turning 4. Jeffrey moaned as he rolled out of bed, sleep heavy on his eyes. He zombie walked into the bathroom to begin getting ready for work, and I crept into the hall to look at the thermostat. It was 61 degrees in our house. Perfectly cold and time to turn on the heater! I flipped the switch, and then sprung back into my cozy blankets, blissfully listening to the heater spring to life, knowing that the children would wake up to a warm house. I shut out the sounds of Jeffrey lumbering around, trying to shake the tiredness from his body, and I fell back asleep! What a glorious time we live in, though. With just the flip of a tiny switch we can have heat in our otherwise cold invaded homes.

When real morning came, Vince woke up first, no surprise there. He hasn't been sleeping at nights. He wakes up nearly every hour and wants to eat. I think he is teething, but those darn teeth just wont break through, making both of us miserable through the night. I wake him up and try to soothe him back to sleep, but more and more often I am finding myself in bed with him snuggling in close, not eating, just breathing in my comforting scent and cozily sleeping. I fall into a fitful sleep because sleeping on my side is not natural for me, and wake up an hour later to take him back to his bed. If I am lucky, I can get him in his crib and sneak out and get to sleep for an hour more. Sometimes, though, I am not so lucky and he wakes up the moment I step away from his crib. I springs into crawling position and is trying to pull himself up before I can even get to the door. Because he does that now. He now crawls and pulls himself up to standing. I fed Vince, didn't fall asleep doing so, and carefully carried him to his room, laid him in his crib, and sneaked out of his room. As I was closing the door, my hand slipped on the know, making a loud crashing sound, and waking him up again. I pick him up, rubbed his back, and within a minute, I dared to lay him down again. This time it worked. I tiptoed back to my room, crawled into my bed, and prayed that Jeffrey wouldn't accidentally wake him while he was getting ready for work, and that he would actually sleep more than half an hour to an hour. My prayer was answered! Vince slept for 3 hours, and I was so grateful because that is longer than I have been getting lately. It was 7, and I got him up, brought him to my room and began to feed him. He lay close to me, smiling and playing, not eating. He would grin at me, and then I would watch in the dim light of dawn as his eyes would slowly close and he would fall back to sleep with the happy little smile still on his face. I kissed his chubby cheeks and played with him as I heard the girls get up. We snuggled close for a bit more while I listened to Keith and Faye getting ready for school. I sighed when the clock read 7:50.  We would have to leave soon, and that meant I had to get up and get dressed. The commotion of the morning had thoroughly awakened Vince by now, so I flipped him on his back and began to play with him. I was singing the Beatles Good Morning song while I took his diaper off to put a new, clean one on. I leaned in to sing "Good morning, good morning," and as I leaned in, he decided to play target practice. He peed right into my mouth and then giggled, as if fully aware of what he had just done! It was disgusting! Luckily it was only a little. Keith and Faye heard me sputtering and came running as they heard me exclaim, "Ugh! Yuck! Oh my goodness, that is disgusting!!!" I think I made their morning. They laughed about it all the way to school. Little boys, I tell you what!

And so, our day began. After dropping off the Littles and I ran to the store for lights because yesterday I decided to be little Sally Homemaker and I installed a chandelier in my dining room! 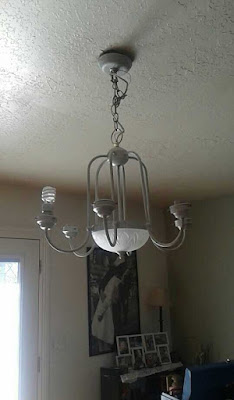 Up 'till now, we have only had 1 naked bulb pitifully doing its best to give light, but it was meager and drove me crazy. I hated it. I had been looking for 3 years now for a new light, but could never settle on one I liked. I was too picky. And then! I went to the DI and found exactly what I wanted! It sat in my house for a week, and then yesterday, while the Littles were napping and the big kids were still at school, I watched a couple of Youtube videos, and then installed it. My dining room is gloriously lit now! It has 8 bulbs to share the load instead of that one pitiful little thing that was there before. I only have 6 lights in right now, but I am so happy with the amount of light shining in my kitchen and dining areas! Soon, I will also have a light in my living room instead of that horrid gaping hole, and I couldn't be happier! 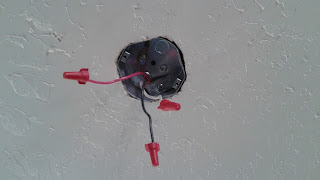 Crystal Collier said…
You don't sleep the first year after the baby, eh?