November 09, 2016
Tuesday November 8th. It is election day. In an effort to calm my nerves, I decided to attempt a blog post.
So, going back to my previous post or two, Faye had a scary high fever. It went down like this.

Monday Faye had a slight temperature so I didn't send her to school. But she acted fine all day. She played and goofed off and made me question the fever that I had read. But she was home from school, so we took advantage of it. We played beauty parlor. We straightened her hair, which she loves. It is a shame, actually, because she has such beautiful curls, but everyone always wants what they can't have, I suppose. I was the same way when I was little. Once her hair was straightened, I decided to really spoil her and whipped out my makeup. Christmas morning, I tell you what! She loved being pampered and loved on. 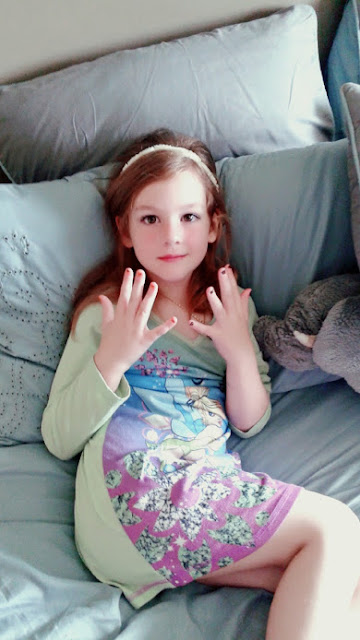 Tuesday she was fine. She hadn't had a fever since early Monday morning, so I sent her to school. Tuesdays are our busy days, after school we have a dance class, and then immediately after, another dance class, scouts, and on that particular Tuesday, I had our Women's Mid-week activity right after that. So I ran around like crazy, dropping kids off, picking kids up, etc. When I got Faye, she said she wasn't feeling well. Her fever had returned. It was 101.3. It wasn't bad, but it was a fever so I told her to lay down, I would be home in an hour, and then I hurried to the activity that I was helping put on. I did a lot of rushing around. When I finally got home, my first item of business was to check on Faye. Her fever was 103.5 by this point. I was shocked that it had climbed so high so quickly. I immediately set about trying to help her fever go down. I began messaging my friend Jessica who is a pharmacist assistant and has lots of experience and knowledge of mixing medications. I gave Faye some Tylenol and watched anxiously as her temperature slowly began to climb. 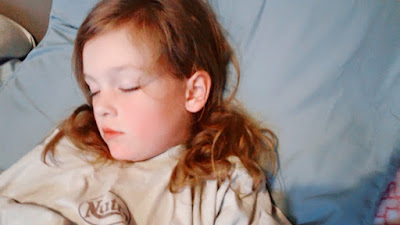 When her fever reached 104 the poor girl was delirious. She was laying on my bed and crying that she was too high, could I please help her down. I was holding her and she was shaking from fear. As I contemplated what to do next, she got worse, looking around wildly and clutching the bed in terror. I decided to take her to the hospital because frankly, I was scared. Jeffrey stayed with the other kids and I headed to the hospital. I scooped my girl off my bed and headed down the hall, Faye was absolutely frantic with fear. She clung to my neck, her legs wrapped tight around my waist, crying that I was going too fast, and why were we so high?  We wrapped her in blankets and I headed out. And then I had an idea. I was going to go to my parent's house first. They live across from the hospital, so it made sense. I drove and Faye insisted I hold her hand. She said I was too far away, and she needed me close. When we got just outside of my parent's neighborhood, Faye started throwing up. It was 11:30 at night, I called my dad and told him I was almost there, and asked him if he could give Faye a priesthood blessing. He did. My mom then insisted that we give her a bath. I poured a warm bath for her and she climbed in, whimpering that the water was so cold. I put a towel on her in the water, and she laid there for a little bit, shivering but laughing and beginning to go back to her normal chippy self. She said she was hungry and asked my mom to make her a smoothie. I told her we could come back the next day for one, but my mother, the angel that she is, made Faye a smoothie, as requested. And then, because she was doing so well, we went back home.

I took her temperature when we got home. It was 101.2. I was so relieved and felt so humbled. How God blesses us! What a wonderful blessing it was for her fever to go down like that, so quickly, so much. And then she went to sleep, and slept so well all that night.
I took her to the doctor the next morning and we discovered that she had strep. And then, my wonderful doctor prescribed a double dose of amoxicillin, knowing that if one of my children had strep, it would only be a matter of time before another caught it. Which was wise because by Friday, Beth caught it. She too, got a temperature of 103.5, but luckily her fever responded to the Tylenol and went down.

I cannot express enough how wonderful it is that we are now, finally well.  What a wonderful thing health is!
Faye Health Motherhood