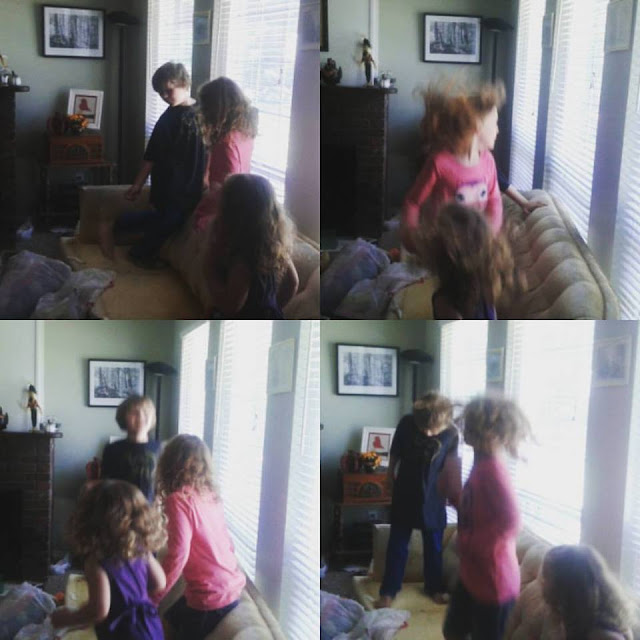 Remember that time when Faye was sick and I was cleaning her sick off the whole house and it was less than pleasant? Except of course you don't, because I was too tired after cleaning her sick up, and then Vince and Jeffrey getting it, that I completely spaced writing about it. But trust me, it was miserable, and no one enjoyed it one bit.

Especially my couch! Because after Faye had gotten sick on it, I scrubbed that thing to pieces! And yet, like an unwelcome house guest, the odor lingered. I sprayed it down with all kinds of cleaners, I put it out in the sun, having read the sun helps to dissipate smells and stains, but to no avail. It was as if the cushions had been dipped into the Bog of Eternal Stench. I did love that couch, but when we could not get the heinous scent to go away, and it was perfuming the air in the house, Jeffrey declared it was time to go.

My yellow couch made me happy. It was long, and one could easily fall asleep, stretched out full length on it. It had a vintage style that just made me smile. Except it seemed to be a magnet for the children. Beth and Faye had colored with magenta Sharpie all over the side of it. Beth had painted with glue all over the cushions and back of it, so that it was no longer velvety soft, but instead, deceitfully dangerous. It could cut you if you got on its bad side! There were wires and springs poking out of the sides and back, and the kids, ignoring the trampoline we have for them outside, had decided to have jumping contests on it. Because the floor is lava, guys, and you have to have 12 practice jumps before springing from the couch onto the rug 1 foot away. And so, it was time to say goodbye to my beautiful couch. Obviously, we let the kids have a mad jumping party on it before we sent it to the dump. Because there was no way we would inflict that stench on anyone else by giving it away.

Thanks to my lovely friend Lisa who kept a sharp eye out for me, I was able to snag a great couch, oversized chair (obviously it has become my reading chair), and an ottoman for free! To me, that was the greatest find ever! I did have to do some serious rearranging to get everything to fit into my living room, seeing as how one piece of furniture left and three came in to take its place. After a tight squeeze, I have everything in a very hygge manner. I am quite pleased with it, and love curling up in my chair (because it is big enough that I can curl up in it!) with my book (currently reading As I Lay Dying by Faulkner) after the kids have gone to bed, and just enjoy my bedtime tea and my book in the silence. It is glorious! 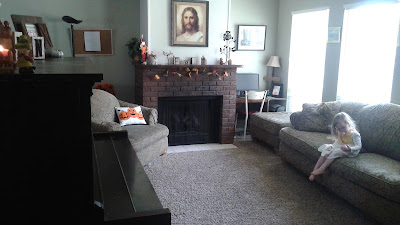 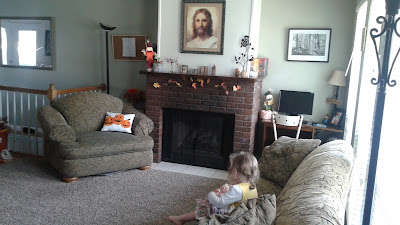 School has started and so far it is going wonderfully. 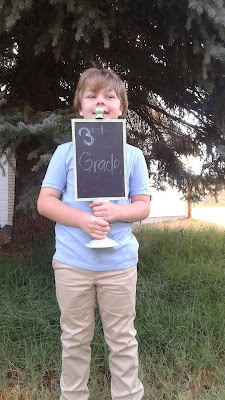 Keith is not hating it as much as he thought he would, silly boy. 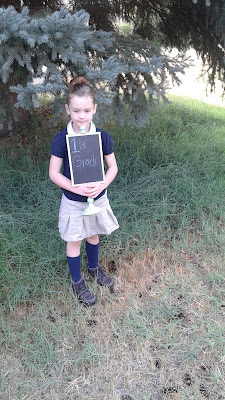 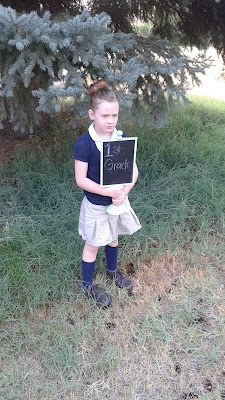 Faye is in heaven, though she says she misses me. She will soon get over it, I am confident, and be so happy and talkative and popular in school that she wont have time to miss me. We haven't really gotten into a routine yet, but I am planning on doing story time at the libraries with Beth, and going on lots of walks, and hopefully get lots of cleaning done so that my house will once again be organized and I can be a happy, at peace Mommy.

Friday night we were going to go to the ward campout, but I got a call from a dear friend of mine. His son and Keith are very good friends and rarely get to see each other. They were having a wienie roast/s'mores night and invited us to join them. Of course I said yes! 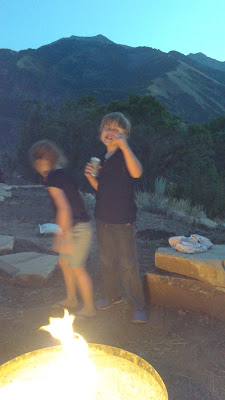 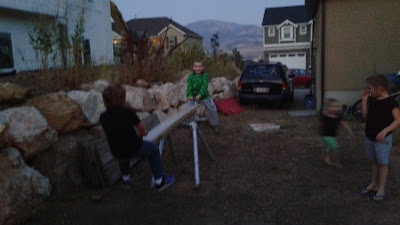 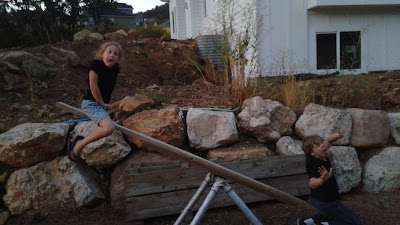 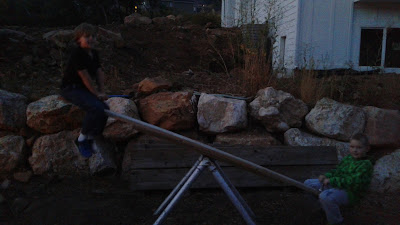 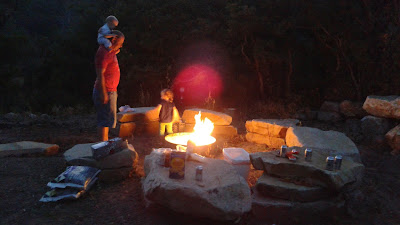 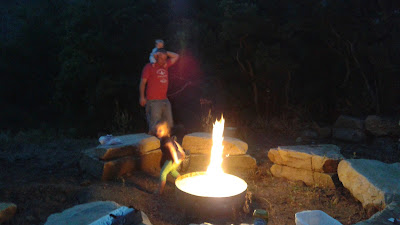 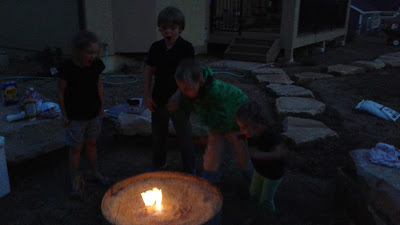 He lives in a place that is like paradise to me. Nestled snug in the mountains, his backyard is a kid's dream with a stream running through it, an old abandoned log cabin, and miles and miles of mountain to explore! I breathed deeply of the crisp mountain air, openly showing my admiration for his location. That is where I will one day end up. Not the same place, obviously, but something very similar. Wild open spaces for the children to explore, crickets as loud as a brass band, and the star painted sky glittering all around. That to me is heaven.

When we tired of the food, we went inside and watched Prince Caspian. I am so happy that they chose that movie. I have been trying, for such a long time, to get Keith to read the Chronicles of Narnia, except he has the weird syndrome that "if mom recommends it, it must be dumb" that kids sometimes get. Finally, he has interest in reading the books! In fact, we started The Lion, The Witch, and The Wardrobe today! He is loving it so far. As I knew he would. By the time the movie was over, however, we didn't get home until after midnight. Keith and Faye thought it was the greatest thing ever, to be up that late. Vince and Beth weren't so keen on the idea.

While the kids have to wear uniforms to school every day, Friday is dress down day. This past Friday, as the kids were getting ready for school, Keith informed me that he doesn't have any dress down clothes. The silly boy never tells me these things until the last minute when I can't really do anything about it! Because of that, Saturday became a big day. First we went to visit my grandmother. 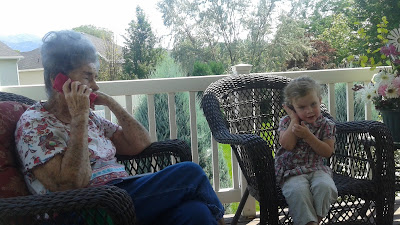 Beth charmed her by pretending a rock was a telephone and calling her over and over on the rock phone. Grandma answered using her glasses case. I laughed so much, as did Grandma! After that, I dropped the younger kids off at my in-law's house, and Keith and I went play clothes shopping. It was miserable. We honestly went to 3 different stores, and I guess his size is very common right now, because there was nothing for him at 2 of those stores! It was incredibly frustrating, because I hate shopping. Especially when the shopping trip is unfruitful. Finally, we were able to find something, and after 3 pairs of pants/shorts and 1 t-shirt, I gave up and we went home. He can wear Jeffrey's old t-shirts if he really needs something. I just think it is funny that he didn't say anything until he needed to be wearing it. He cracks me up, all of the time.

My kids are absolutely perfect for me. I have thought about this quite a bit, and am amazed that Heavenly Father knows each of us so well. He sent me the children that I would be able to connect with, and grow from the most. What an absolute blessing they are in my life! I feel like I just gush over them all the live-long-day, but what's a mother to do when they are as cute as mine?! 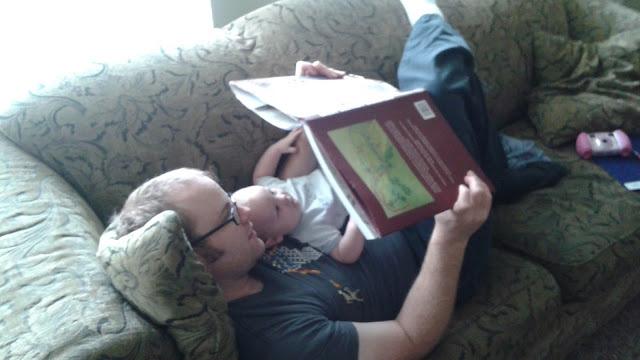 And let's just admire this adorable photo of Jeffrey being the greatest dad in the cosmos or history of ever, shall we?
Just a thought Keith Motherhood

Susan Anderson said…
So much fun catching up on your kids. They are really growing up!
And I don't blame you for saying yes to fun at that cabin!