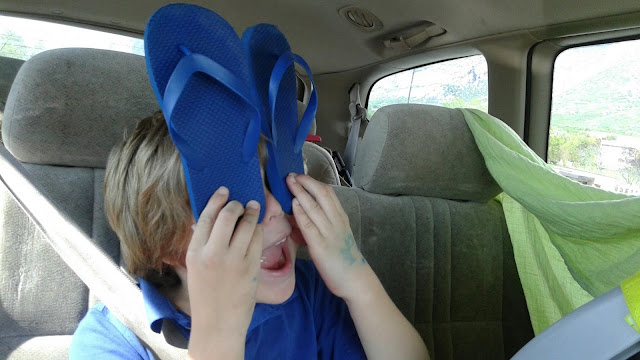 School is out now. The last day of school was interesting. Faye was sad because it was her last day, and Keith was feigning sickness to get out of going. What?! Who tries to get out of going on the last day of school? Everyone was awake by six that morning, and so I told them that if they were all the way ready before seven, then Keith could have a pizza to eat all by himself {the dream!} and Faye could have an ice cream cone from Macey's. Both were thrilled with their respective rewards. Keith got ready before seven, and Faye, as usually, was rushing around searching for her shoes as we were walking out the door. I really don't know what that girl does in the mornings, but while she wakes up early, she just has a hard time getting herself into gear and getting things done.

After dropping the kids off at school, I met up with Adrienne and Annie to go walking down a beautiful trail near our houses. Half way down, though, Keith called me from the school saying that he was sick. I tried really hard to talk him into staying, telling him that he wouldn't be getting that pizza if he was sick. Not as a punishment, but because if he was sick, I wouldn't want him to get even sicker, and if he came home from school, he would obviously be sick. He insisted that I come get him, so I turned back from the walk and picked up Keith. And since there were only 20 minutes of school left for Faye, I checked her out early. On the sign out book, it asks for the reason I was checking her out, I simply wrote "because." Because I didn't really need a reason to check her out early on the last day of school.

Adrienne and Annie were watching Beth and Vince at the park, and as we pulled up to the park, Faye jumped out, and Keith lingered in the van. Suddenly, from the back seat I heard, "Oh, that was silly of me. I think I just have growing pains. I'm fine. Can I go play at the park?" Sigh! 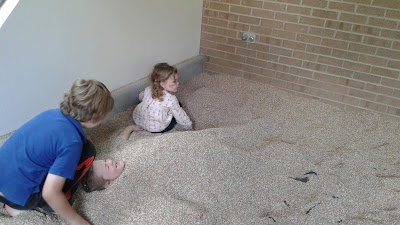 We got out to go get the other kids, and as soon as I got there, or rather, five minutes after we had been there, Beth began walking towards me as if she had just slipped off a saddle she had been riding all night long. That funny legs apart and slightly hunched down walk. "I had an accident, Mommy," she said. At that point, I was just done with the park. There were too many signs saying that is was time to no longer be there. So we went home.

Keith got inside and went to the bathroom where he let out a house shaking "bum burp" (as my kids call them). And then he said "Mom! I am all better! My stomach doesn't hurt at all anymore!" I laughed. I wish we had figured that out earlier, but what could we do? Keith and Faye then spent the rest of the day outside playing with their friends, and I was so happy to hear the laughter and squeals and the occasional shout from the back yard. I want our house to be the house where all the friends go. I worry a bit that some of these kids that come over, who are four years older than Keith, are just using my kids for their trampoline, but if it doesn't bother my little ones, I shouldn't let it bother me, I suppose.

I am loving having them home with me! We have a rule that there is one day each week where electronics of every kind are banned because I don't want my kids to spend their summer inside. Summer should be full of exploring, sunburns, messy hair, the smell of water on burning pavement, and so many popsicles. Summer should be lived out of doors! And since Keith has a tendency to spend his days inside, I am going to enforce an outdoor day. Also, they are not allowed on the computer until after they have read. And they are only allowed to be on the computer for however long they read. This way, I hope to help them keep up their creativity and keep their wits sharp. We are going to make a bucket list today, so I am thrilled to no end for the possibilities of their imaginations! 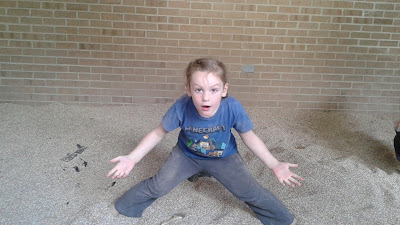 Speaking of reading, this weekend I was feeling very blah, and so I dove, head first into reading. I read five books this weekend! It was glorious. I do need to tone it down a bit, though. Except I have two books on hold at the library, and I have two more on my bookshelf that I am dying to read, so we will see how long this step back from reading will actually be. Maybe I will be able to pace myself and read in moderation? {Ha! I guess if I haven't learned how to read in moderation by now, I probably will never learn.} 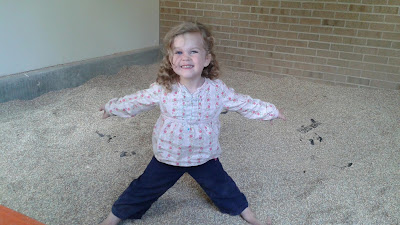 While reading a book to Beth, there were pictures of lobster in it. They were cutesie lobsters. Beth asked what they were, and I told her. "Lobster," I said. "Monster," she said. We went back and forth about lobster vs monster for a while me trying so hard to help her say lobster, but she just couldn't say it. I laughed. It was adorable. Then yesterday, Jeffrey was playing Be A... with her. He said "Be a lobster," and she put her hands up in monster claws, and ran stomping around the room yelling "Rawr!" I laughed so hard! And then of course, had to explain to Jeffrey that she thinks lobsters are monsters.
Blessings Creating Memories Motherhood

Chantel said…
Let's not let the whole summer go by without getting together!!! Thursday and Friday's are good days for me. I only work one Thursday afternoon a month and never on Friday!
June 3, 2016 at 7:14 AM