Beware of the dough it creeps and leaps... 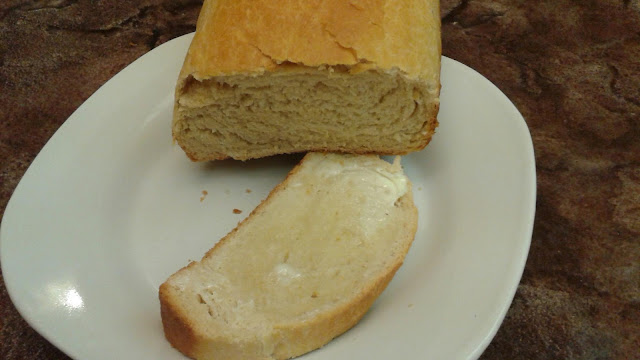 I love fresh baked bread. I love the comforting and copacetic feeling that comes when the house is full of the aroma of bread in the oven. I think if love had a smell, it would smell a bit like the woods in the Autumn, the salty goodness of the sea, the freedom of the mountains and a whole lot of fresh baked bread.

I haven't made any since I got pregnant with Vince, and that is a real shame, because we have really been suffering with the meager specimen offered in stores. But Jeffrey must have carbs, so bravely he soldiered on, full of the insubstantial store bought bread, telling me he didn't care so much, as long as he had bread. But I know the truth. MY bread is infinitely better, and does a much better job of keeping him filled, and his taste buds happy. And when Jeffrey is happy, it makes me happy.

Because of my apparent bread snobbery {homemade is best}, I was invited to teach bread making to the women in my ward next Tuesday, so I decided I should probably pull out the Bosch and get back into the swing of things. I have only ever made freshly ground whole wheat bread, and decided this time around, I would put a spin on things and see how my recipe holds up with white flour. Because I just know someone is going to ask if my recipe works with white. I just know they are. This is for you, white bread lovers.

Thus far I am not impressed.

Granted, it may be a bit of my own doing. I should have known better.

I went into this, thinking in the back of my mind that I would probably need some dough enhancer. But my dough enhancer is rather old. I haven't used it since I discovered this bread recipe. So I resolved to attempt the recipe, as it is written, without any aids to the dough. If it turns out terribly, Jeffrey and the kids will happily eat it, and I can begin again, as soon as it is gone. And at the rate they eat bread, it will only take a few days.

I mixed everything up as I was supposed to. I added enough flour so that it was pulling away from the sides cleanly, and let it knead for about ten minutes. Like I always do. I took the Bosch mixer off the machine, and dumped the dough onto my freshly oiled counter...

...and it oozed out, like some sort of primordial goo.

Things escalated quickly. I grabbed some flour, dumped it on the dough and attempted to knead it by hand. Except it sucked my hands into its belly, obviously intending to keep me there 'till the end of time, and only let go with a lot of pulling and loud squelching sounds was I able to eventually free myself. Of course, I began to sing while adding more flour. And more, and more, eventually losing count of how much I had added.

Beware of the blob, it creeps
And leaps and glides and slides
Across the floor
Right through the door
And all around the wall
A splotch, a blotch
Be careful of the blob.

When my hands were finally free, they were so covered in dough, that any attempt I made to release them only caused more dough to attach itself to my sticky claws.

This went on for a good half hour.

Eventually, I got the dough off my fists, was able to knead the Blob into submission and a satiny sumptuous lump was ready to be divided, put into pans, rise, and then bake.

While waiting for the dough to rise and bake, the best thing to do is blog, obviously.

Honestly, I had my reservations. But a lovelier loaf of bread you never did see. It is quite a shame that it is so late and dark right now. I wish I could get a decent photo of it to show, because I am quite pleased with the turnout. And my house smells heavenly! I am considerably tempted to put the kettle on, cut myself a slice, and have a bedtime snack of tea and bread nearly too gorgeous to eat. With a book, of course. Quite frankly, the dough tastes as yummy as it looks and smells. Color me impressed! This recipe really is the most versatile, fool-proof bread recipe I have ever made! 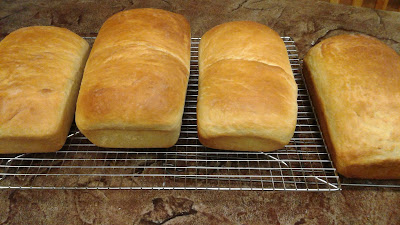 For anyone interested, this is my recipe, or rather my sister's recipe that I have adapted. And for the record, next time I make it with white flour, I will add the dough enhancer.

In a large mixing bowl, combine water, yeast, oil, honey and salt. In that order. The oil will help the honey leave the measuring cup. The honey will help the yeast rise, and salt kills yeast, so it is important to have the honey in before adding the salt. Let sit 5-10 minutes so yeast can proof. Add 5 cups flour, and using the spring loaded position on your mixer, pulse the flour into the wet mixture. Once it is mixed in, keep adding flour until dough pulls away from the sides of the bowl. You want it to be a little sticky, as that will provide softer bread, but you don't want it to be so sticky it doesn't knead properly. Let knead for 10 minutes.
While dough is kneading, prepare the pans. Using Crisco, butter, or oil (not spray oil), thoroughly grease bread pans. Set aside. Oil counter, hands, and rolling pin. Remove dough from pan into a large lump. Cut into 5 equal sections, and one by one, give a quick rectangular flatten with the rolling pin, and then roll the bread, pinching and tucking the ends beneath. Place bread in greased pan. Repeat 4 more times. For a softer crust, brush tops of dough with oil. Cover with warm damp cloths, away from drafts and let rise 1/3, or 35 minutes. Preheat oven to 425. When dough has risen, remove cloth and place in oven for 8 minutes. Then, without opening the door, lower temperature to 350 for 28-32 minutes. When bread is finished, remove and immediately apply a thin butter to tops of bread. This will help it maintain a beautiful glossy sheen. Let sit 5 minutes, then remove and let cool on cooling racks. Once bread has cooled, cover and store.

*Using oil instead of flour to prevent sticking is better for the bread. In the mixer it arrived at the perfect density. Adding flour toughens the bread. Using oil helps to soften the crust, and keep the bread soft and fluffy.
**Rising times may vary depending on the temperature, humidity in the air, etc.
***Place large roasting pan on bottom rack of oven, half full of water. The water will keep the oven moist while the bread is baking, thus keeping it from drying out.
****Because this bread has no preservatives, it should be eaten quickly. We have never had it go bad, but that is because it disappears so quickly at my house. The bread freezes very well, though.

And there you have it! My favorite bread recipe with all of the little tricks and tips I have learned along the way. The great thing about this particular recipe is that it works everywhere. My sister has made it at an elevation of 8,000' as well as 82'. She said it turns out great every time, regardless of the elevation, which is wonderful news when it comes to bread baking! 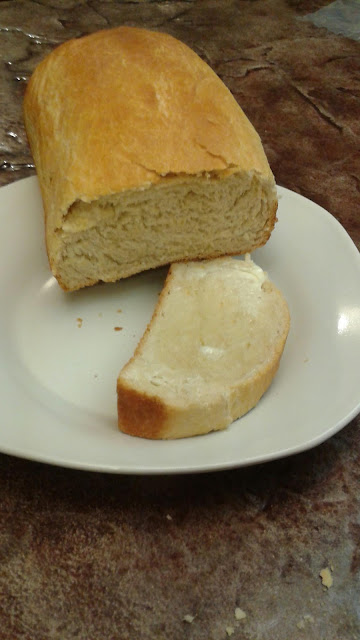 Susan Anderson said…
Bet your hubby is enjoying this moment!