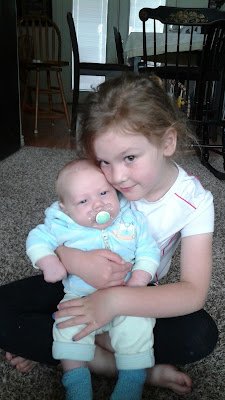 Today was a lovely day. I expected to be dead on my feet since Vince had a rough night last night, but I was incredibly surprised by my energy and lack of a need for a nap. You see, yesterday I woke up with a migraine again. I tried taking some medicine for it, but it didn't help. And so, after a few more hours dealing with the pain, knowing I would soon have sole responsibility of 6 kids, I gave in and self medicated with a caffeinated drink. It did the trick and got rid of the migraine, which was very important for my (and all 6 kids) survival. However, it caused problems for Vince, and he didn't sleep well because of it, which means, I barely slept at all, either. Which is why it is so surprising that I had such a lovely day! Granted, I didn't get any of my big plans done, but that isn't what is important. I did the important things, and it felt good.

Last night I stayed up late cleaning my kitchen and living room. I always feel so much better when those two rooms are clean. And then, while the dishes were washing in the dishwasher, I baked some cookies. My favorite kind, and I haven't had them since we moved here, so it was well past time to make them. Oatmeal cookies, but made with cloves and allspice and cinnamon. And the way they just melt in your mouth, and saturate the air with that spicy sweet smell, is just wonderful! I closed all the windows, trying to trap that smell in my house.

The kids woke up, Beth first, traipsing into my room, her curls creating a honey colored halo around her head, maddeningly speaking through her binki. She loves to be my little messenger and wake the other kids for school while I am feeding Vince.

When Faye got home from school, she was thrilled. It was finally her turn to be the helper, which meant that she got to take the Ted E. Bear friend home with her. Which meant we needed to come up with some activities for her to do with it before she had to take him back tomorrow. She took him to piano lessons with her, 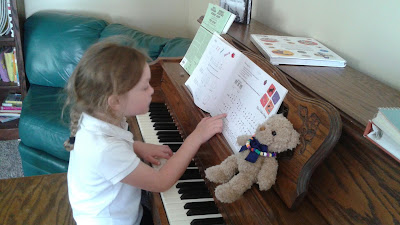 and then we decided we would have a tea party with the little bear. When Keith got home from school, of course.

And so we had a tea party. As I was pouring the tea for everyone, Keith happened to look at the clock.

The kids and I laughed at how appropriate it was to be having our tea right then and there, as that is the proper time for tea anyway, according to Animaniacs, and all the other cartoons they have watched. 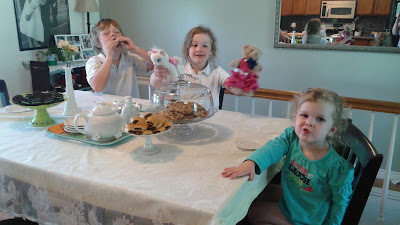 We chatted and drank our tea, and they were allowed one cookie each, as Jeffrey was on his way home from work, and I have seen their appetites be spoiled by treats before dinner. I love Tea Time with my kids. It is the perfect setting and opportunity to teach them about manners. While we were eating and chatting, Faye was leaning into her hands, both elbows propped up onto the table. And then a song I had learned years ago at girl's camp burst from my lips, before I even realized what I was singing.

The kids thought it was the best thing ever, and tried to get caught after that. Beth was my favorite as she would catch herself, climb down from the stools around the table, skip around and sing it to herself. Over and over and over, like only a two year old can do. As we dined, I noticed that there seemed to be a lot more birdsong than usual, coming from outside. It was beautiful to listen to the chirps mingle with the laughter of my precious, goofy children.

I think Ted E. Bear must have enjoyed tea with us!

And then the night got busy! Dinner, dance, scouts, clean up, bedtime, etc. All while Vince was very unhappy. I think his tummy is hurting him today as he has been very fussy. I can't think what I could have eaten that would bother him so much. Possibly the caffeine? But I had caffeine his whole pregnancy, and I've had it since he was born, and he hasn't been this bad. I'll figure it out, I'm sure. Just so long as it isn't those wonderful cookies, because they really are the best ever!

And then bedtime happened as if out of a story book. First Beth brushed her teeth and got her jammies on. Jeffrey helped her with her prayers and then layed down with her, telling her the story of her first two years of life. While he did that, I was reading with Faye. When it was time to pick up Keith from Scouts, Jeffrey left and I stayed with the girls. Beth came out of her room and I read them two stories. By the time I was finished, Beth was nearly asleep and she climbed onto my back while I crawl carried her back to her room, tucked her in, and she was out as her head hit the pillow. And then Faye only needed me to read one more story to her before she, too, wanted to go to bed.

Vince woke up, which put a hiccup in the storybook bit, but I fed him, let him spit up all over me, because if it helps his tummy feel better, I say "Bring it!" While I fed and rocked him, I prepared some sleepytime tea for Keith (and some more of that Gypsy Cold Care kind for me, because it was tasty! And I've had a sore throat since the beginning of April.) 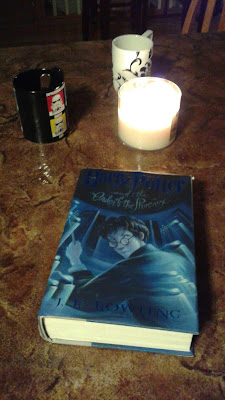 We read together as we sipped our tea, and then he was ready to go to sleep! I looked around at my clean house, all the children tucked happily into their beds, and me, ready to follow suit.

I am blessed beyond compare. I remember feeling slightly annoyed on Saturday at the mess in the house, and then I was overcome with gratitude that we have so much stuff to make a mess with! We have a house to make a mess in. What wonderful blessings those are, which are not afforded to everyone. I just hope I can always carry that sentiment, especially when I am confronted with the disaster that is Faye and everything she touches.

Susan Anderson said…
Hope you have checked that sore throat to make sure it's not strep.

Karin's twins had stomach problems quite often until she started them on an infant probiotic. It really helped.

Your family is darling, Amy. Just like their mom.