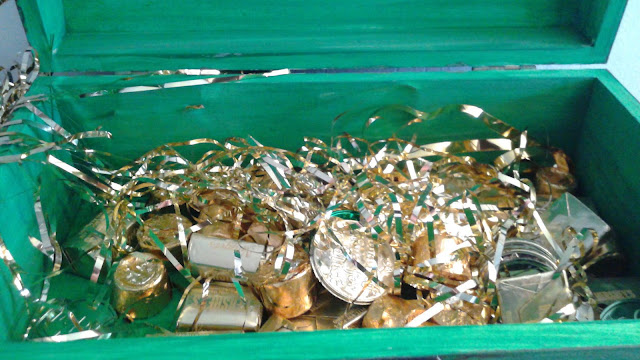 Today is one of my favorite days of the year. I mean aside from every day in October, but you already knew that. Today is the day I get to prank my kids all. day. long. and blame it on Finnigan O'brian, our visiting leprechaun. I get to create magic, and they all believe in it. Even skeptic Keith who has never believed in Santa believes in the reality of leprechauns. 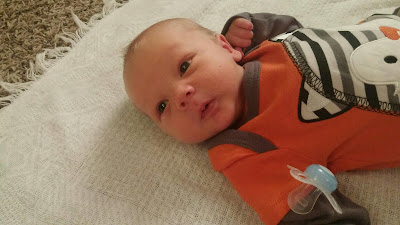 Last night Lisa came by. She wanted to meet Vince, and we hadn't talked in ages, so when her kids were in bed, she left her sleeping husband in charge, and came over. It is always so delightful to visit with Lisa, and we had a very enjoyable evening. She oohed and aahed appropriately over Vince (and by appropriately, I mean until I was blushing) and held him a bit so I could enjoy the luxuries of life, like going to the bathroom. When my kids were finally asleep and Prince Vince was fed, diaper changed, burped, swaddled and placed in his bassinet, Lisa and I sneaked out on a special mission.

My life long friend Leslie is a phenomenal seamstress. Each year she makes an article of clothing for Finnigan. 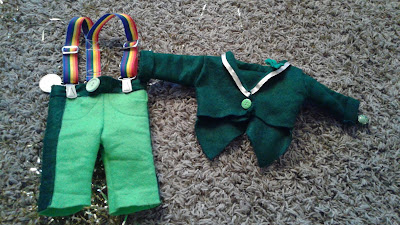 This year, they were darling rainbow bracers, and I wish I had some for me, they are that cute! I chatted with Leslie a bit, and we got caught up, and then Lisa and I hurried back. I pulled out the paint and glitter, and we set to work, fixing up the house to be an entropy of glitter and gold. Lisa had a brilliant idea when I told her I love to prank the kids, but didn't know of any pranks off the bat. She suggested we move the couch from the living room into the kitchen, and the kitchen table into the living room. I loved it! 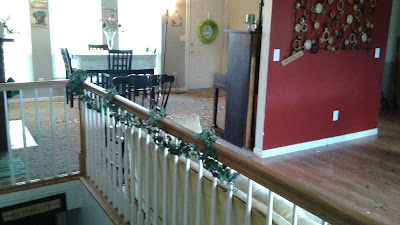 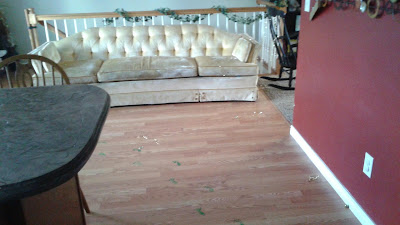 We stopped what we were doing and tackled that job immediately, and it looked fabulous! I added some plastic fish I found on the floor to the flower vase on my table, too. And then the green paint for the leprechaun feet throughout the hard wood floors. I decided to forgo the toilet as one of the kids typically wakes up on the night to use the bathroom, and so it would be wasted before anyone got to see it this year.

All day long Keith had been talking about how he wants to be friends with the leprechaun, and doesn't want his gold. He said he really wanted a scavenger hunt, too. Jeffrey told Keith that he would have to build a leprechaun trap in order to get the wee man to slow down long enough to read the letter Keith had written him. Keith wrote his letter, placed it in front of the trap, put the trousers and dinner jacket in the trap in hopes the leprechaun could take his clothes back home, and then he went to bed. This was a bit of a problem for me since I had already commissioned Leslie to make the bracers, and they were finished! I didn't know how to get him to leave them behind if he was expected to take all of his clothes home! And then my lovely Leslie came up with a brilliant idea. She suggested we tell him it is due to ancient leprechaun law. And that is what we did. Lisa and I (mostly Lisa) came up with this response to his letter.

Keith's letter said "Can you give us a scavenger hunt and take your clothes! in return." 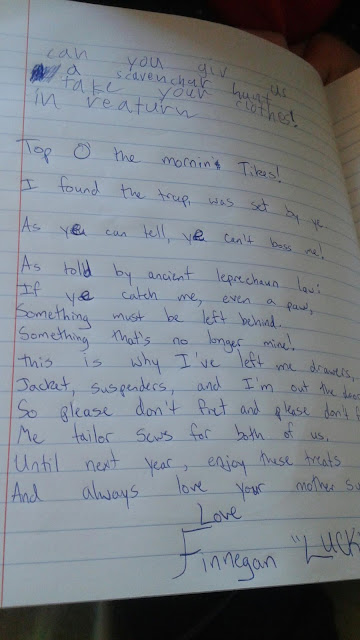 We responded with: "Top o' the mornin' tikes! I found the trap was set by ye. As ye can tell, ye can't boss me! As told by ancient leprechaun law: If ye catch me, even a paw, Something must be left behind. Something that's no longer mine! This is why I've left me drawers, jacket, suspenders, and I'm out the door. So please don't fret and please don't cry. My tailor sews for both of us. Until next year, enjoy these treats, and always love your mother sweet! Love Finnegan "Lucky" O'Brian.

When all was set up Lisa took a few pictures and went home.

Faye woke up twice in the night. The first time, she rushed into the living room and brought me the notebook to find out what the leprechaun had responded. I was so tired, though, having just then gotten Vinny to sleep, and dropped off myself. I told her we would read it in the morning. When morning came, the kids thought it was the greatest thing in the world, to have me be the one Finnigan was messing with this year. They laughed delightedly, but Keith was disappointed there was no hunt. I made the kids get ready for school and while they did that, I put a few drops of food coloring into their bowls, and then began cooking some cream of wheat. As they stirred their porridge, it gradually turned green, and they thought that was funny, too! They both left for school in high spirits, and I have to say that I think i was a success again this year! I was planning on drawing up a hunt for them for this afternoon, but things got out of my control, and I have to just be happy that they got what they got, and they are happy and grateful for it.

Happy St. Paddy's day, friends! May the wind be always at your back! 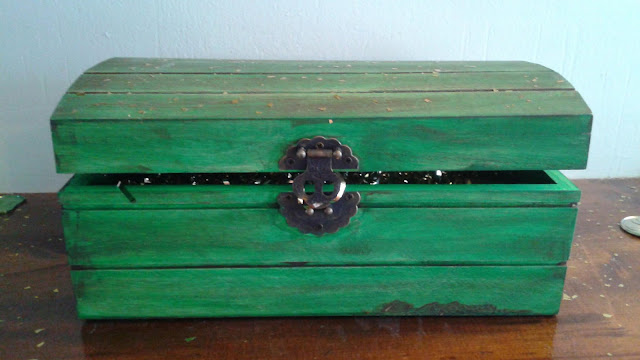 Susan Anderson said…
You are a fun mom! And Vince is adorable!!

Randomlicious Memoirs said…
You are such a spectacular mother!! I wish I had your energy! 😟 Sounds like it was a wonderful day and memory for your children.
March 24, 2016 at 6:17 PM