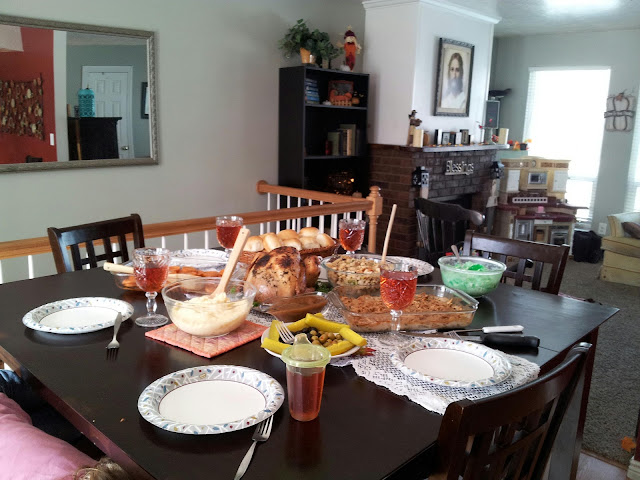 And then I pointed out that I am really tired with this pregnancy, and so cooking a big meal like that would be hard for me. He said he would do it. And then I reminded him how much I hate cleaning up, and how tired I am going to be after cooking such a large dinner. He tried to say that he was going to cook the dinner, except could I do the turkey? And the green beans? And the rolls? And yams? and pie of course. He could do the potatoes and corn. But he swore he would clean everything up, no worries for me.

I laughed. We both knew I would end up cooking everything.

I bought the turkey, defrosted it, and decided to try brining it this year. I have only ever cooked a turkey once before, and that was last year, so I wasn't sure how to do it. I hate turkey, as a matter of fact. But it was Thanksgiving, and Jeffrey had his heart set on us doing our own, so that is what we were going to do. And he was going to clean up, so I guessed that would be alright.

The night before, I decided to do as much work as I could. Last year when we had done Thanksgiving, I had worn myself out, and we didn't eat until 6 that night, even though I had been cooking all day long. So, Wednesday night I made the pie, I chopped all the vegetables, I made the jello, and prepped everything I could that didn't need to be done the next day. And then I went to bed, completely satisfied and happy with my work.

Thursday morning came around and I began my preparations. I made Cranberry Spiced Cider in the crockpot. I buttered up the turkey and put some chopped vegetables and herbs inside it, then popped it into the oven. I pulled out the rolls to let them rise, boiled some potatoes and yams, and mixed up the green bean casserole. I made a veggie plate. When the turkey was finished cooking, I pulled it out and let the juices set in, while the rolls, yams, and green beans baked.

The table was set (paper plates and our fancy goblets, thank you very much!) and the family was called to dinner. Jeffrey proudly carved the turkey, we passed the food out to the children practicing our best manners, and ready to enjoy this beautiful Thanksgiving feast! The food was passed to the left, elbows off the table, food was politely asked for, food chewed with mouths closed, etc.

Then the Thanksgiving ritual of saying what it is we are Thankful for. We got around the table once, I had had a drink is all, and then I needed to lie down. Not wanting to miss the festivities, and chalking it up to being overly tired from all the cooking, I lied down on the couch in the living room. Keith didn't want to eat anything, either. He claimed that it was the turkey that was making him feel yucky. So he excused himself from the table as well. Faye enjoyed it, and Beth didn't eat a whole lot, as she rarely does.

And then Keith, Faye, Beth and I all got sick. It was terrible! We were all in my bed, taking turns rushing to the bathroom, stomachs in agony. What an awful day to be ill! But it certainly made me count my blessings. I was more grateful for health than I have been in a long time. Jeffrey was absolutely amazing with taking care of us all. He cleaned up Beth's vomit when she had an accident in her bed. And he just was there, offering the moral support we needed.

Unfortunately, being sick really turned us off of the Thanksgiving leftovers, so it is up to Jeffrey to eat them on his own. Poor boy.

I am happy to say, however, we are all better. The kids and I are feeling so much better than we were before. Granted, I still want to sleep a lot, but I am not entirely sure that is the illness' fault. Jeffrey, however, is paying the price for being such a wonderful nurse. The poor boy is in bed now, just as sick as we all were. Hopefully his passes just as quickly!
Blessings Family Time Gratitude Health