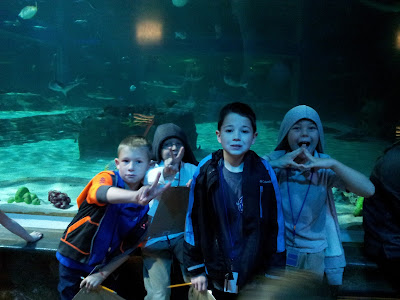 This morning as I was walking into the kids' school, I saw a mini-van parked next to the curb in front of the main doors. A woman was standing next to the open passenger side door. She was wearing pajama bottoms, and her hair was slightly on the bed head side. I could see some khaki clothed legs sticking out of the door. The woman's head was tilted down, and it looked to me, (the passer by) that some serious negotiations were in progress.

Which made me smile.

And then I surprised myself with the thought "I really love being a mom!"

I was slightly taken aback with that thought, prompted by the scene in front of me, but as I entered the school doors, I thought on it, and decided it is so true. Even when kids are being ridiculous. Even when I am the one in my pajamas with bed head, coaxing my child out of the vehicle and into the school, I love being a mom!

That thought has been on constant replay in my brain today. I was privileged to be one of the parents to chaperone the field work today, and we got to go with the kids to the Living Planet Aquarium. Once upon a time, we had a family pass there and would go all the time, but not since they changed locations and increased their price.

It was so wonderful and we learned so much!

The kids have been studying bison so far this year. We talked about why we would be going to the aquarium when they had been learning about bison. Although there would be no bison in the aquarium, we would be able to learn about different habitats and animals, and how they adapt to their habitats. Because it is important to understand about adaptation.

Keith loved learning about the penguins.
They didn't do much. They really just stood there, and at first, I thought they were a display, based upon the awkward positions they were in. A few swam around, but other than that, there wasn't much to see. Which was sad. In the past when we had gone, the penguins were running all over the place, playing tag, swimming around and having a grand old time. Today, they were acutely aware of all the kids, and were modeling for them. At least that is what I led my group to believe. We were disappointed to not see the otters play, either. I was really looking forward to that. We just had bad timing, is all. They had eaten about half an hour before we got there, and so were dozing in the corner.

But that was quickly made up for by the rope bridge over South America. I was so impressed with Keith. He is typically terrified of heights. I couldn't believe he went over it! 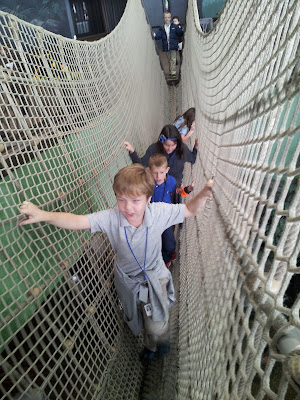 And then there were the sharks. Let's just talk about the shark tunnel, shall we? It really was amazing! 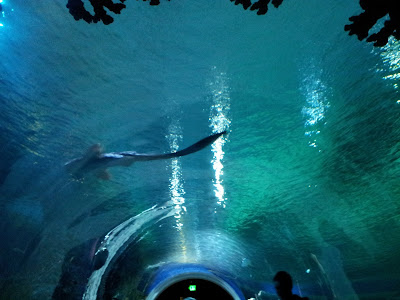 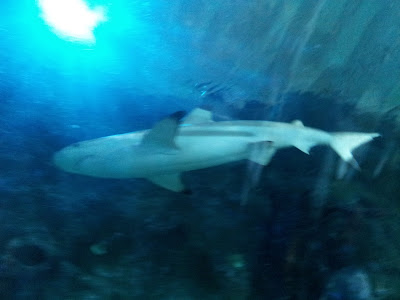 and the phosphorescent jelly fish. 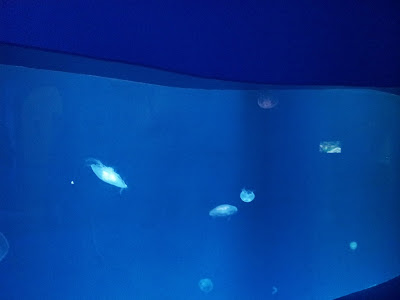 My favorite bit of all, though, was probably the class they held, special for us. They took us up to a special room where a teacher (who works at the aquarium) came out and talked to the kids about the blue whale. Which is the largest creature, in all history of time, to have ever lived on the earth. While we learned lots of interesting things about the blue whale, the thing I found most interesting was the fact that it is hunted by orca. At least that is what she told us. Keith and I talked about it on the way home, and really wondered how. How on earth can an orca, which is typically four times smaller and weighs 13 times less than a blue whale, kill and eat a blue whale?! And so, in an effort to teach my son to find his own answers, we decided to research it when we got home. And we found we had been slightly mislead. While orcas can hunt the blue whale, they don't typically, unless it is a baby, injured, or sick. And usually leave the babies alone, anyway, because there is often a whale escort to help protect the babies. One of their defenses, aside from their size, is they are one of the fastest creatures in the whole ocean. Some of their blood vessels are large enough for an adult human to swim through. Seriously fascinating stuff! 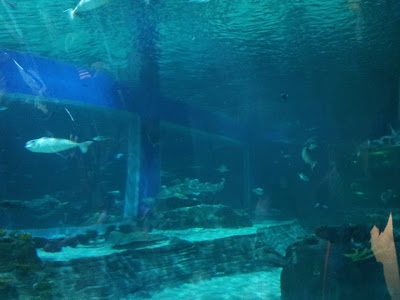 After the field work, I took Keith home with me. We stopped by Sconecutter, which I love, and he has never had. Truth be told, I haven't been there in nearly 7 years, but I remember liking it, so I took him there. He loved it! It wasn't as good as I remembered, but memory always makes things better than they are, I think. BUT! Sitting in the restaurant with my little man, was absolutely wonderful. I love spending that one on one time with him.

When he finished, we drove to my parents to pick up the girls. We listened to one of Keith's CDs the whole way back, and Keith texted to his dad, all about his field work. The whole drive back, I kept thinking how lucky I am. On the CD was Free Falling, a song that will always remind me of Keith. When I was pregnant with Keith, I had been home from my mission for less than a year, and that song is all about my last area. Reseda, Ventura Blvd, Mulholland Drive, etc. While the song has nothing to do with my mission, it always made me happy to sing it, as I have such fond memories of that area. When I was pregnant with that boy, I would crank that song and sing as loud as I could. It was lovely having that memory flood my mind while we spent some time together.

When we eventually walked in the door of my parent's house, Beth saw me, and ran over and gave me a five minute hug. I love those! She was so happy to see me, and I her. Faye was mad that I was there because she wanted to keep playing with her cousins, but Beth was tugging on her ear, which is the surest sign of all that she is ready to sleep, so we headed home.

Oh what a wonderful blessing it is to be a mother. I love these kids of mine to pieces and even on the bad days (which today was not one!) I am so grateful that I alone get to be their mother.


Now that my favorite part of the day is recorded, I guess it is time to move on to regular business.

My little sister moved here from Alabama! She and her family are currently living with my parents as they look for a house. Her husband is going to finish school, which is why they decided to move here. I am beyond thrilled to have a sibling living in the same state as me again. My kids are doubly thrilled to have cousins here to play with. They do have cousins on Jeffrey's side, which is wonderful, but it is nice for them, when we visit my parents, to finally have cousins to play with there, as well.

Faye had a birthday. She is now 6. I will write about that later.

I typically go to bed around 8. I am exhausted all the time, and pregnancy brain has set in, which feels a lot like my brain before I was taking iron. I am so thankful for iron!

For all of these reasons, and the fact that Beth has been beyond needy, for no apparent reason (a tear filled "Mommy, I need you!" is her favorite phrase right now) is why I have been remiss in my journaling. I make no promises to be better because life happens. Which is wonderful!