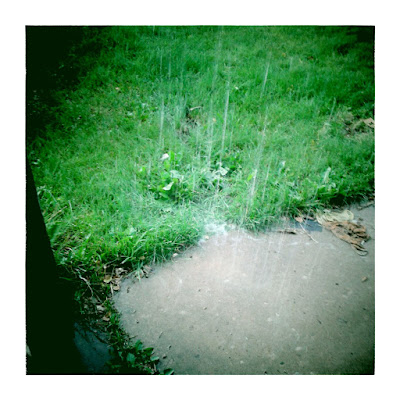 It seems there is a whole lot of rain this summer.

Which I think is absolutely brilliant! And it comes on, all of a sudden, like a sneeze. The sky will be slightly cloudy, I will check the forecast and it will say there isn't a hint of rain for weeks. I will pack up the kids for some outing or other, and all of a sudden, just as we arrive, it is there, the slight tickling in the nose of Mother Nature to indicate a sneeze/storm. We ignore the few sprinkles, thinking they will be here and gone in a blink, when we are obviously and clearly mistaken.

A few weeks ago exactly that happened. The sky, she was moody, with a few comfortable grey clouds drooping over the mountains, like a well worn sweatshirt. The cold breeze that was blowing was a relief from the heat, and we decided a trip to the park could not be better than to go on that particular day. 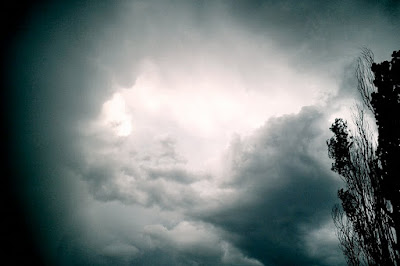 We were a bit late leaving, because Faye had decided to throw light bulbs and watch them burst. My friend had given me some gorgeous outdoor lights that I had strung up on my banister. Beth discovered that she could unscrew them, and throw them down the stairs, whereon they made a lovely bursting sound as they shattered. Faye was jealous and decided that she wanted to try it, so that morning had been unscrewing light bulbs and throwing them on the driveway. When I asked her why, she said it was because she wanted to know what it would feel like to be Beth. Sigh. That girl is always thinking, and it often gets her into trouble! So that day her consequence was to have to stay by my side, just like Beth does, and to follow the rules that Beth has to follow.

After brushing the broken glass to the side where it wouldn't be stepped on or run over, we piled into the van and left to meet up with Adrienne and her kids. As usual. They had been waiting for us and playing at the park for a good half hour before we got there, thanks to the broken glass debacle. SO! The kids and I got to the park, they burst from the van like water from a broken dam, and the children swarmed Adrienne and me. Meanwhile, it was sprinkling on our heads.

We decided we wanted to walk the trail behind the pond, and so all headed in that direction. As we got beneath the trees, the sneeze storm that none of the forecasts could predict came in full force. Huge raindrops were dumping on us, and while the kids complained, Adrienne and I laughed and reminisced about our individual childhoods and the joy and excitement of playing in the rain. None of this namby-pamby whining our kids were doing. We played in the rain and we liked it when we were kids. This generation has gone soft, etc. As we reached the portion of the trail with no overhead covering, we had to make a decision. Would we continue onward, braving the deluge, or would we listen to the whining of our children and turn back.

Example is the best teacher, right?

Which is what settled that debate right then and there. Adrienne and I waltzed out into the rain that was coming down so hard it was difficult to see more than 10 feet in front of us. Faye skipped along with us, the babies clung tightly to our sides as they were being carried, and the boys hung back.

More rain came dumping down on us, by the bathtub full. We were completely drenched, like we had just emerged from the bottom of the pond with new legs and a song in our heart kind of drenched. Mermaid style. The babies began to shiver, but by now it was more a matter of pride than anything. We pushed forward, pushing the kids with us. Making them tough it out. Because we will not have wimpy kids, darn it! At least that was my attitude. Adrienne later told me she fell to the powers of peer pressure. Which was her way of just pinning the whole experience on me. At least I know I can be persuasive, though. Glass half full. It wasn't peer pressure, it was my mad reasoning and negotiating skills!

We eventually made it to the tunnel where there was no more rain, but the wind blowing through was another layer of redundant cold. Adrienne and I decided it would be best if I just went back and got the van, and we could all pile in there, go back to my house, get warm clothes on, and get cleaned up. Faye and I left her with the babies and the boys, and she and I re-entered that glorious thudding rain dance, matching our slow jog to the syncopated beat of the drip of leaves, or the tink on metal. We giggled about what an adventure it was, and what a great memory they would be creating. I hope it is a fond memory, though! She and I slipped and slid across the mud next to the pond, so careful that we didn't slip into it, or fall and get mud all over ourselves, although that would have just added another layer to their memories! Faye and I got back to the van, and drove over to the tunnel (which went under the road). I jumped out, hollered to the kids, they came running, and the rain magically stopped as they were climbing into the van.

And we came back to Moon Hollow. Since our kids are all the same ages/genders, we got everyone changed into clean dry clothes, made some popcorn and hot chocolate, and played for the rest of the afternoon. 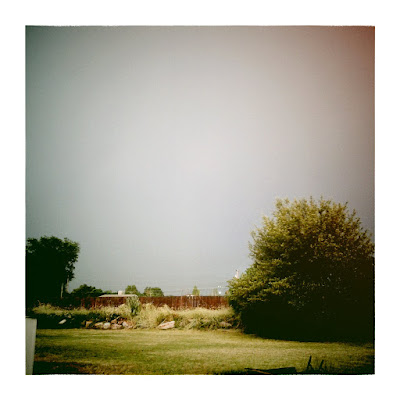 I am so in love with these desert storms. So sudden, and gone equally as fast. I love being able to seize the moment and enjoy the gift of cool air in the middle of oppressive heat. I really hope there is a way I can share this love with my kids, that they will pick up on the carefree joy that accompanies and mirrors the spontaneity of nature, and continue on their own adventures.

Because if not, what use are these amazing storms, anyway? 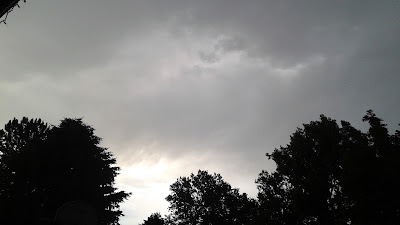 Oh man. Sad I missed that one. We need to plan another Friday activity! Going to the parade this week with my family so nothing planned for this week but I'm planning to go to the Riverdale Splash pad next Friday if you want to go.