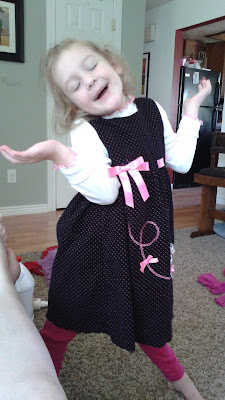 Saturday morning I had one of those moments where I just wanted to freeze time and live in that moment forever. Nothing spectacular was happening, it was just very normal. Jeffrey and I were in the kitchen making breakfast. I was at the stove with the potatoes and eggs while he was at the counter flipping hot cakes and bacon. Beth was sitting on a stool, trying to steal pancakes whenever she could, Keith and Faye were fighting/playing in the living room, and just to add a dash of confusion to the noise, we had NPR playing in the background. Because there is nothing like the slightly inappropriate humor of Wait, Wait, Don't Tell Me to begin your Saturday off right. Except I usually listen to it when I am in the car and no children are around, and I learned very quickly it is not really child befitting. That aside, though, it was lovely!

Breakfast was a rare feast. And I say rare because the children usually don't have the patience to wait that long, nor do Jeffrey and I have the desire that early in the morning to whip out a four course meal. But in honor of Independence Day, I decided I needed to do something. I remembered my grandma's Bear Lake Souffle (aptly named, as that is where we usually spent our 4th of July mornings) which cannot be beat, and we had it every year. I want my children to have memories like that, so bacon, sausage, pancakes, potatoes, eggs, and pancakes we had, as well as fresh squeezed orange juice (from the can) and toast. But it was a happy day. Not completely Norman Rockwell-esque, but enough.

I want her to remember the time I was sitting in the living room a few weeks ago, working on Primary things, when I heard an odd noise coming from the carport. It sounded a bit like pounding metal, and I felt I had better investigate.

I walked outside and found Keith and our next door neighbor girl sitting on the grass, watching Faye. I put my finger to my lips, indicating they shouldn't alert her to my presence, and I followed the sound around the corner until I was in full view of her escapades.

We had not yet set up the trampoline, and she really is my little Tigger. Which is the reason we bought the trampoline. Because she needs to bounce. And bouncing she was. Like a graceful little joey on the roof of Jeffrey's car. Her skirt billowing up and about her like a jellyfish with each and every bounce, her face beaming with sheer delight whether from the sound or the feel I doubt I will ever know, but it was absolute bliss for her. I leaned against the corner of the house, watching the joy of each spring, the freedom of each bounce, until her leaps brought her around and her face crumpled from ecstasy into guilt when she caught sight of me.

"Oh! I didn't know you were standing there," she said, honestly.

And that is what I love about Faye. She is honest.

There were no made up excuses about why she was jumping on the roof of Jeffrey's car. There was no attempt to hide her guilt, just a simple and honest "I didn't know you were there."

That girl makes me laugh.

It really is. And those little things add up to so much over the years. 😊

It passes far too quickly. I'm looking at sending my oldest out the door in just over 3 years, and the prospect is terrifying. How does that happen? I love that you're chronicling your adventures though. This blog will definitely be a family treasure in the years to come.

So I hope it's okay, but I mentioned you today--because you're awesomesauce. You might get one or two extra readers... http://crystalcollier.blogspot.com/2015/07/very-inspired-by.html

Came through from Crystal's blog.