To Live in a World Where it is Always June 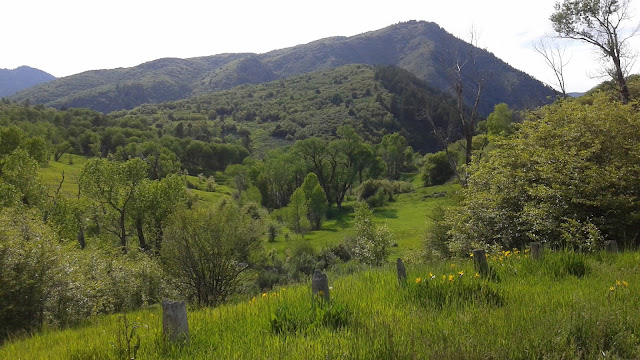 Summer has officially begun. As with all moments of importance and celebration, we had to kick it off in grandeur. Because that is what we do. And the end of the school year is a day of great importance, as is the beginning of summer. We celebrated both.

Hello, June! I can't wait to get better acquainted with you.

Yesterday, was such a grand getting to know you activity. It was such a beautiful day, in all senses of the word. Keith about went out of his mind waiting for Avery to get out of school. The kids did their chores, Faye got to play with her cousin, and I visited with my sil while making an awesome rhubarb pie. While I was preparing the pie, I had a flash of inspiration. The next time I make rhubarb pie, I am going to add some orange zest. I think that would be out of this world gorgeous for the tastebuds. I can't wait to try it out! I made some quesadillas for lunch and got a horrific burn. Apparently freshly melted cheese dripping onto a finger while transferring the quesadilla from pan to plate to counter, equating a total of three seconds, can cause quite the gnarly burn. Seriously, I have a blister the size of a lady bug on my thumb, and it is only with the greatest of self control and the memory of the consequence that keeps me from exacting great pleasure in popping that bad boy. I love popping blisters, and peeling sunburn skin, and picking at scabs. I really don't know why it is so satisfying to do those things, but oh my goodness, it is amazing. But I digress.

When Avery finally got out of school, they came over to our house just as Beth was waking up. While Beth was eating her lunch and the kids were running around outside, Adrienne and I sneaked some forks out of the drawer and "tasted" the pie. It was quite honestly hard to stop with just tasting it, but we managed to use our self control. When Beth was finished, we grabbed some sunscreen which ironically was completely forgotten about while it sat in the car and we happily played in the sun we then headed up to the mountains to frolic and let loose. 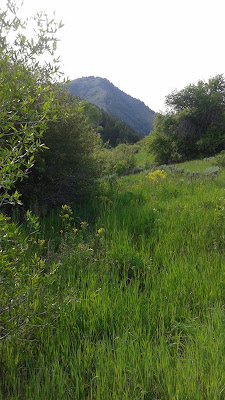 I was struck by the beauty of the area where we went. The area is a favorite for Adrienne and her family, though it was my family's first time there. There is a short trail leading off the main trail which is right by the parking area. It is in a National Forest and honestly, I don't think many people know about this particular hidden treasure. 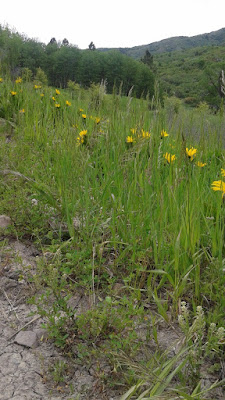 As soon as we got there, the girls immediately began playing in the stream while the boys went off in search of wood for a fire. Keith is quite the forager and the fresh air really helped him come alive. On one of his trips back to the clearing where we had set up camp, so to speak, we could hear him long before we saw him. The boy had a log nearly bigger than himself that he was lugging towards the fire pit, singing "I found a log," to the tune of Clementine. His happiness and carefree mood made my heart burst. There is nothing better for the soul than fresh air, and good friends. I love how he and Avery are such good friends. Beth and Katie are also best friends. Faye and Emily, on the other hand are more like frenemies. But oh my goodness, there was no fighting between any of the kids the whole time we were up there, and the air and smells and freshness patiently oozed its way into our souls.

Adie is an expert fire builder and before long, there were delicious s'mores to be had. 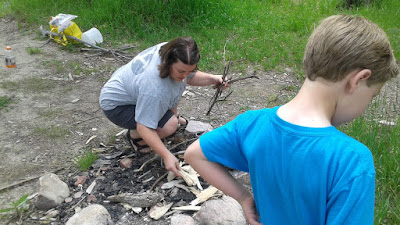 Avery and Keith had found some good long and thin sticks which they whittled into points and used those as marshmallow roasters. 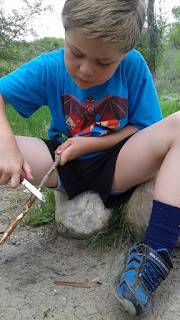 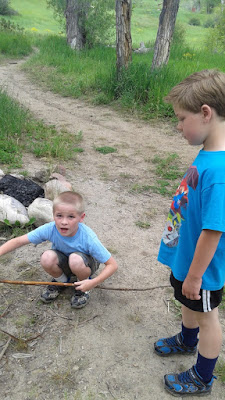 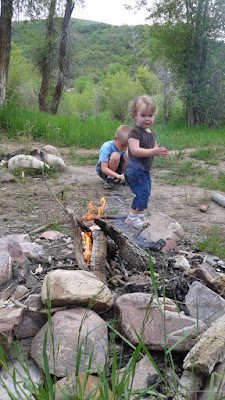 Every time Faye got a toasted marshmallow, she promptly dropped it in the dirt. It was quite comical the look of devastation on her face each and every time. Of course, she ate it anyway. A little dirt never hurt a marshmallow.

Sticky fingers, muddy pants, and dirty faces was the theme of the afternoon. Beth found a little mud slide on the bank of the stream and used it to her heart's delight. 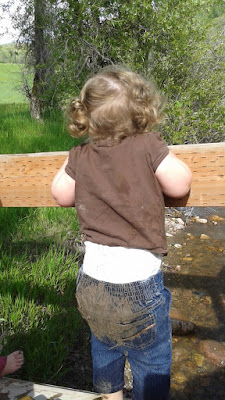 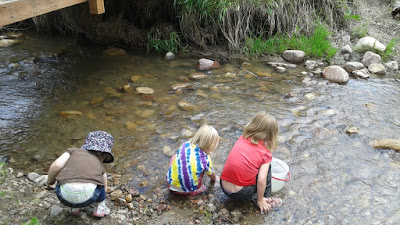 The boys went exploring, and the girls sometimes joined them, but not often. The boys' imaginations were far too vivid for the girls. Apparently there were trolls, and troll caves, and a dragon hiding out in the hills, and Faye came back to us, crying. 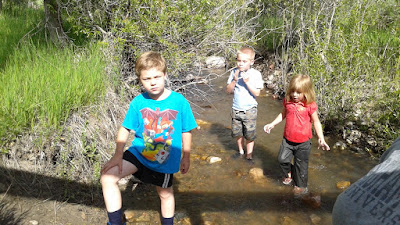 We gave her a sharp stick to fight the trolls off with, and all was well in her world, again. We then told her that across the stream is where the trolls and dragons lived, but behind us and up the trail was the fairy land. That cheered her up immediately, and she and Emily went off in search of fairies while Adie and I visited and tried to keep the girls from drinking the stream water. 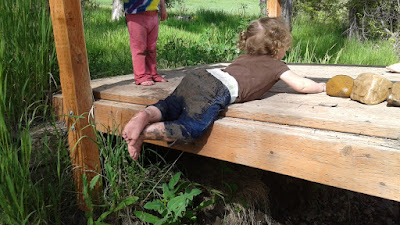 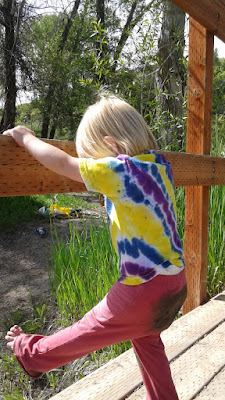 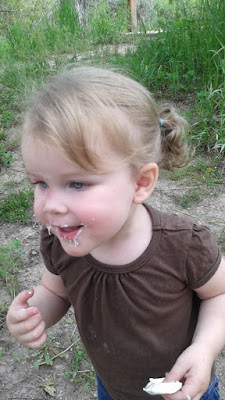 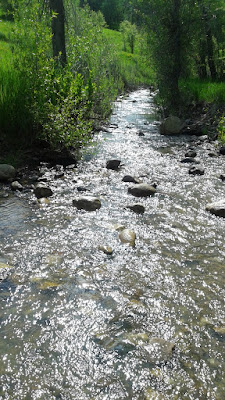 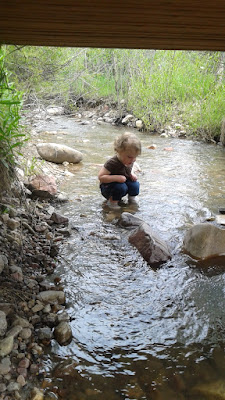 Before too long, it was time to head back home. We drove through Trapper's Loop back home, and I wished for the millionth time that I could live there. It is like living in Little House on the Prairie, or something akin to that, with all of the rolling hills, the green which is actually quite rare for our area of the world, and the wildflowers blooming everywhere. It makes the wilderness girl in me long for her home. 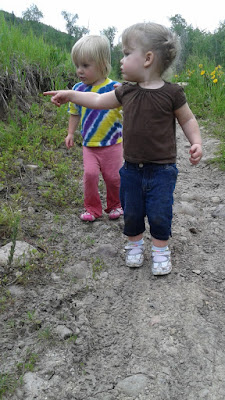 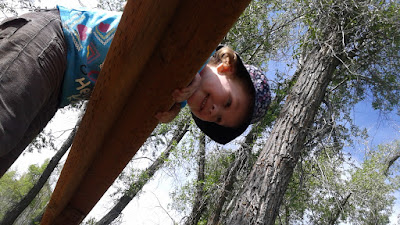 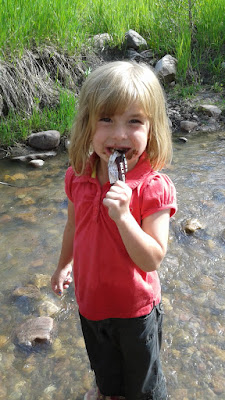 As we wound our way through the green hills and the canyon, Beth decided the winding path really wasn't for her, and got car sick for the second time in her life. Although, it could have been the 20 or so marshmallows that she kept sneaking. Man alive, we were tired when we got home! We discovered that Jeffrey had enjoyed the pie, as there was about 1/8th left, which we divided and ate for our dinner. Then it was bath time, and bed time. Everyone went to bed without much of a fuss, and I think their dreams were that much better because fresh air and sunshine does wonders for wearing children out. 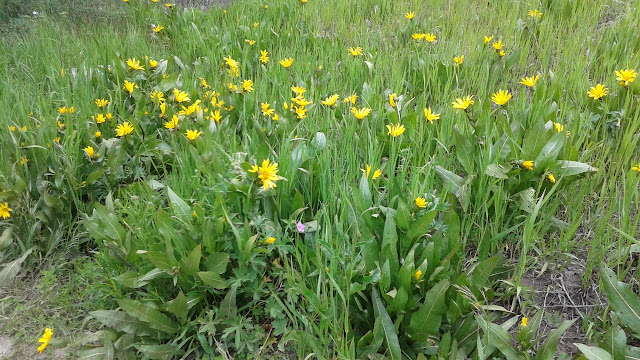 Adrienne and I decided we need to do this often, this summer. The exploring and nature adventures. We remembered that the children really come alive while out in the wilderness.

"I wonder what it would be like to live in a world where it is always June." ~L.M. Montgomery

Chantel said…
Oh man. Can I join the next adventure? Avery and Emily have gotten so big. I didn't even recognize them. It's been a long time since our Ogden days!!!
June 5, 2015 at 1:55 PM