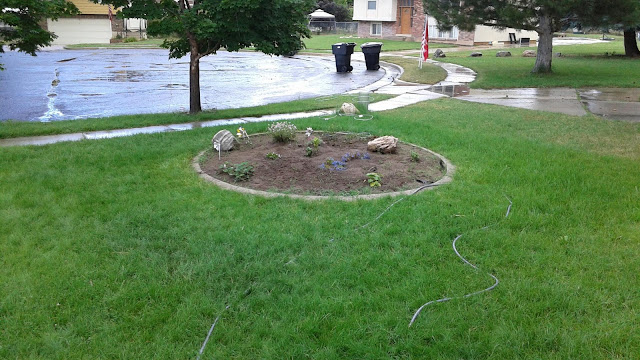 There is nothing quite as wonderful as a summer rainstorm. And if there is, I have yet to discover it.

Today has been simply blissful! Beth let me sleep until 8:30, which is Christmas in and of itself. She then came in my room for her morning snuggles and milk. Keith or Faye usually sneak into her room when they hear her stirring, play with her for a little bit, and then get her out of her crib. At that point, she will come running into my bedroom, curls haloing around her head, binki clamped firmly between her teeth, and she will clamber up into my bed as quickly as her clumsily waking up limbs will let her. At that point, I usually ask Keith or Faye to bring a drink in for Beth, juice or milk, and then she and I will snuggle in bed while she drinks, and we whisper and giggle, and really enjoy the moment. Sometimes when I am too tired, I will pull out my Netflix phone, and she will ignore the fact that she can watch a show on my phone, rather she will try to go into all of the apps that tempt you to spend money, and she will try to buy the world. Which is usually a great way to jolt me into alertness. We are a team to wake each other up in the mornings.

As I was getting dressed, I could hear that all the children had gone outside and were playing. We cleaned out the shed on Saturday, and there was still a bunch of bits and bobs that had not yet found a home. I hurried out to join them, and a neighbor boy came over to play with Keith. I let them play around for a bit while I watered my wee bit of a garden, and then the kids and I went inside to get some chores done.

Except that isn't what happened.

Beth found a book. She was getting sleepy. We found her freshly laundered comfort blanky and snuggled up on the couch where I read nursery rhymes to her out of one of my favorite childhood books.
The artwork of this book simply enchanted me, and long before I could read, I remember sitting on the floor gazing at the lovely pictures and pretending I was the lady in the nursery rhyme Ride A Cockhorse to Banbury Cross. Except the "bells on her toes" line always perplexed me.

But I digress. I was so happy to be able to cuddle with Beth on the couch, reading her these nursery rhymes I was always so fond of. Keith and Faye eventually gravatated towards us and had fun trying to figure out the riddles.

Keith's favorite to stump people on is "Elizabeth Elspeth, Betsy and Bess"

Elizabeth, Elspeth, Betsy and Bess,
They all went together to seek a bird's nest.
They found a bird's nest with five eggs in,
They all took one, and left four in.

The answer is that all the names are diminutives of Elizabeth, so it was just one person.

Another rhyme we read created a bit of a science discussion.

As the days grow longer
The storms grow stronger

We later googled that rhyme to see if scientifically it is sound, and sure enough, it is true!

The memories I am sharing and we are creating! It is magical, I tell you.

We looked outside and saw some impressive thunderhead clouds gathering, so we decided we had better move some of the more damageable things out from the open, in case it began to rain, even though the forecast said it wouldn't. As I was finding my shoes to go outside, I heard the rain begin. Keith and Faye and beat me out there, and Beth was hot on my trail. Keith was a lovely helper and together we were able to move most of the things out of the rain. But that rain came so fast and so hard!

We could hear the sky crackle with electricity as the lightening tore through those black clouds. Before the light had much time to register in our eyes, though, the earth shattering boom from the thunder followed. And then the hail started. I know saying pebble sized hail doesn't sound all that impressive, but when it is being hurtled from the sky in fistfuls, quite painful as it bounces off your back, it is much more alarming than it sounds. I grabbed an old umbrella and hurried over to our small metal shed and began to throw some things into the safety of its shelter. As I stepped in to put a box inside, lightening crackled, immediately followed by another knock-you-off-your-feet boom. At that moment I realized the lawn mower would probably be fine, and it was really not a great idea for me to be holding an umbrella with a metal pole, standing inside a metal box with the lightening being as close as it was. I left the lawnmower and rushed back to the kids. When I got near, I glanced through the curtain of hail and saw the terrified eyes of Beth.

Tears were spilling down her cheeks, and she was quietly whimpering, hanging on to the steps of the deck. I felt so bad for the frightened child. Of course it would scare her! I immediately dropped the umbrella and scooped her up into my arms. I shepherded the older two into the house, and of course, we flocked over to the windows to watch the rest of the storm in the safety and comfort of our house. 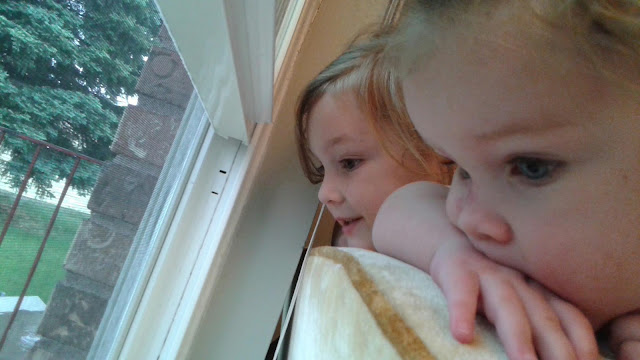 It was beautiful in its ferocity. And while it only lasted about 10 minutes more, we were in awe at the savage strength of Mother Nature. 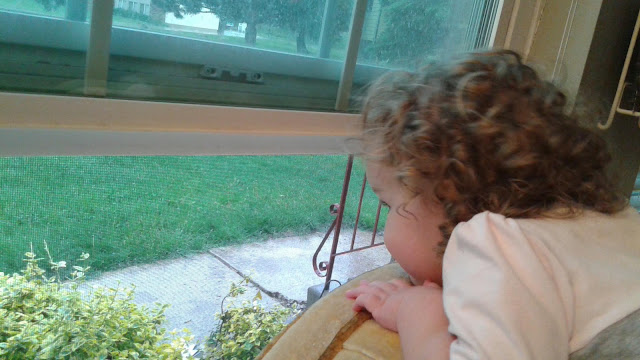 Then, quite as suddenly as it came, the storm was gone. The sky is cloudless now, a mere half hour after the fact. After the storm Keith and Faye wandered away, downstairs to romp and play and create chaos and havoc as they are wont to do. I scooped up Beth, and she and I rocked in the rocking chair for a little bit. She tugged on her ear, as she always does when she is tired, and she kept saying to me "Scared. Scary." I kissed her all over her adorable little face, whispered in her ear, and hummed her lullaby as we slowly waltzed down the hall to her room. Even as I lay her down in her bed, she still kept whispering "scared." I guess it was quite the experience for her!

The house is quiet now, which is a rarity. My mind is calm, and I feel quite refreshed after the excitement of that lovely storm this morning! I really truly believe that there is magic in a summer storm.
Creating Memories Great Outdoors Learning Nature Reading Science