Today was Mimi's funeral. It was the happiest funeral I have ever been to. It was more so a celebration of her life with everyone commenting on her ability to exude love and patience. It was a beautiful service, and though I think many people aim for funerals to end up like that, hers truly was perfect. After the service Jeffrey and I took our kids to our friends' house so they could play with their kids. While the kids were looked after, Jeffrey and I got in the van and drove for three and a half hours up to Jerome, Idaho where Mimi was buried next to her parents. Again, a lovely service. There were stories of Mimi shared that had us all laughing, and we rejoiced in the blessing we had to have known her. Jeffrey and I wandered the cemetery for a bit and found his great grandparent's graves, and those of other distant relatives.

It was such a calm and relaxing day considering.

I have been dealing with Mimi's death in a wholly unexpected way, though. Usually when someone close to me passes on, I get sad. I cry for a few days. And then I am fine. I move on with my life missing that person, but understanding they are happier and it isn't goodbye, it is more of a "See you later. " For some reason, I wasn't able to do that with Mimi at all. I didn't really cry. Not more than a tear or two, any way. It isn't like I was in denial, either. I was happy for her. And like I said, my understanding of life after death has nearly completely removed the sting of death for me. I was ready. I had said goodbye to Mimi on Sunday and I had no regrets with her.

Despite this all, I really didn't cope well. I got angry. I was so grumpy! I yelled at anything that moved. I honestly couldn't be around people without exuding my anger all over them, and I was baffled as to why I was acting like that. The anger and grumpiness lasted all of Monday and well into Tuesday.

When I found myself still being irrationally angry, I decided it was because I needed to cry. That would get pent up emotion out and I would be able to cope and move on. Except I couldn't cry. Not a good cleansing cry, anyway. I tried watching movies to cry, but I barely sniffled. Anytime I got close, something inside of me would block it and I couldn't. Which would frustrate me more, which in turn added to my anger. Finally, I had a memory. Once on my mission I had had a bad day. Everything had gone wrong and I was grumpy. I decided we weren't getting anywhere, so my companion and I decided it would be best to go home. Once back to our apartment, I went into our bedroom, closed the door, got down on my knees and repented. I asked forgiveness for my completely unnecessary bad mood. I hadn't intend to do that, and as I did, the words coming out of my mouth surprised me, but on further reflection I realized I did need to ask forgiveness for acting like a git, both from my Heavenly Father, and from my companion. Once I did that, we had an incredible day! It was a lesson I have never forgotten.

Remembering that experience, I went to my room to pray, except I couldn't find the words to say. So I asked for help to find the words. Once I did that, I expressed my frustration with my impossible emotions, and how bad I felt for constantly yelling at my kids and husband. I asked for help to know how to stop. And then I became obsessed with an idea. So much so, I am not sure if I even finished my prayer. I don't know if I ever did.

The thought I had was to write. It went around my head and left ideas and desires to write in every turn, cranny, and angel in my brain. If I could just write, I would be fine.

And so that is what I did. I waited for Jeffrey to get home and I locked myself in my room and turned on my computer.

and stared at it.

Nothing came to mind. It was completely blank. I could hear echos rolling around my brain, the way the sound of thunder rumbles until it fades into a memory. The cobwebs were shivering in the complete baren wins which twisted through the nothingness in my mind. So I procrastinated, and eventually tried again. After several failed attempts to get anything to my brain, it was suggested to me to try Train of Consiousness writing. I did and after about 20 minutes of that, my brain began to work.

I was determined to have those chaotic emotions resolved before the viewing Tuesday night. I wrote and wrote, and just spoiled the past week out there. When I finished, we had about half an hour to get ready and be to the viewing. I felt a lot better and rushed to get everyone ready to go.

I am usually a mess at funerals. I always cry, even if I don't know the person well. My tear ducts may have been pushed nearer the surface after all my pregnancies because I usually cry at the drop of6f a hat. I was counting on this as we went to the viewing. I even wrote my water proof mascara. Except I didn't cry and my tear ducts were confused. We relief in Mimi's life. Everyone was simply happy to have known Mimi, and people weren't crying.

But I felt a lot better, and a lot more like myself again.

Today there weren't many tears either, because of the joy and ability to recognize the blessing it was to know Mimi.

Except after the grave was dedicated and people were leaving, the mortician turned on a song.

It was the song I have been singing in my mind since I learned about Mimi passing. We sang it in choir for graduation in high school.

"May God Bless You and Keep You"

I was shocked and humbled and overjoyed at such a tender mercy,so obviously given to me for comfort and a sign that I am lived and watched over and cared for. It truly was an amazing experience when that song came on! And that is when I finally cried,except it was again only a few sniffles, but it was enough.

Before heading home again, Jeffrey and I went with his mother and sister to see the town where she had grown up. We went to the farm and the old apartments her grandfather had built. It was the perfect amount of nostalgia, and I ate it up like s water eats sugar; greedily and quickly, absorbing it until it became a part of me.

And then we came home, got our kids, and snuggle attacked their tired little bodies because we had missed them so much.

I am so happy to report that I feel completely back to normal, and am excited to get back to the daily grind. Yes, I actually am excited to clean the house. Maybe it will be as cathartic as writing has been. 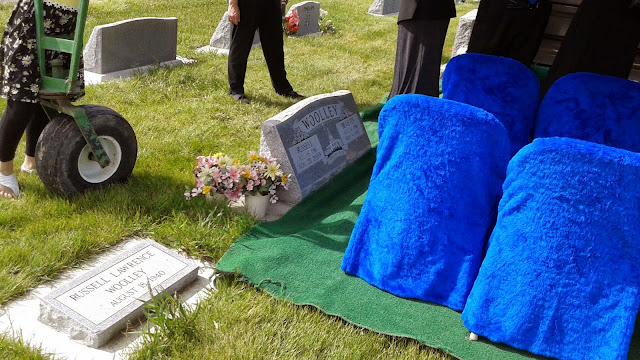 Lisa said…
Beautiful. I'm so sorry I haven't been there for you this week. Just know that you have been in my thoughts and prayers, even if I haven't been sane enough to talk on the phone. Mimi was a beautiful person, and even if I never got to meet her, I always could tell of your love for her when you spoke of her. Enjoy getting back to real life, and I'll try to be here for you more!!!
May 14, 2015 at 8:09 AM

Susan Anderson said…
This was such an interesting read, Amy. Aren't our spirits complex and wonderful?

Sorry about your Mimi. Glad you are feeling better inside yourself.