Worms, Puddles and a Garden 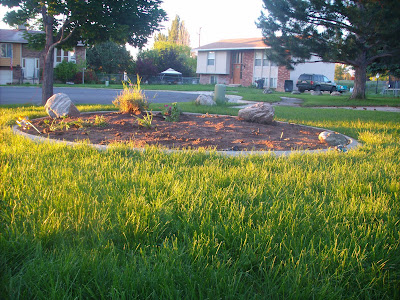 I bought some plants the other day, because I am determined to have something of a garden this year, even if it isn't the full fledged one I long for. I decided I would plant some things in my flower mound in the front yard. Jeffrey worries that it will be tacky, but honestly, is there anything tacky about a fresh tomato and basil sandwich when the tomatoes and basil have been picked moments prior? I contend that it is the furthest thing from tacky there is. Besides, it will look a whole lot better than the weeds that have decided to take up residence there.

Yesterday afternoon, when it finally quit raining, I decided it was the perfect time to go out. I was watching Adrienne's girls, and we all went outside to play in the dirt. Faye and Emily were so excited to start an earth worm farm. Every worm I dug up they greedily snatched up with a handful of dirt, and promptly compared it to all the rest, determining whose was the biggest, juiciest, fattest worm. The babies gleefully found some rather large puddles and happily plopped down, fully clothed, to splash about while I wrestled with the ground covering of weeds, evicting them from my precious flower/vegetable bed. Of course, when there is water to be splashed, the older girls naturally have to compete in that, too. Because they are masterminds when it comes to finding ways to compete with each other. All four girls were happily mucking about in the rain puddles drenching themselves completely, to their satisfaction.

It took quite a bit of self control to not join them. But I needed to get those plants watered and in the ground. Because we really want a pumpkin this year! I had to first create space to plant it. Occasionally a child would wander over to me and offer to help by breaking my trowel, or using the hand rake to shower worms and dirt on us both. Adrienne eventually came to pick the girls up, saw what fun we were having, and decided to play in the dirt with me.

When the girls had were done and didn't want to be wet and dirty anymore, they tromped through the house, into the bathroom, and all four of them climbed into the bathtub together, splashing, laughing, and creating a shallow wading pool on my bathroom floor.

And so, once Addie and I got the girls cleaned up and the bathroom scattered back to rights, I decided I needed to get ready for the day, seeing as how I was covered in dirt and had a Primary meeting in less than an hour.

Adrienne popped some popcorn for the kids (the boys were home from school by this point) and sent them to watch Godzilla vs. Mothera (begged for by her 5 year old daughter. Apparently she is doing this whole parenting thing right.) while I got cleaned up, and then that angel of a friend went back outside and triumphed over those final pesky weeds, and then planted my plants for me. Wisconsin style.

Instead of going home and weeding her own garden!

That is true friendship right there. She is simply wonderful.

I made spaghetti for dinner that night. The kids were complaining about the food, so I did what any tired parent would do:

"It looks like spaghetti. I don't want spaghetti for dinner."

"Oh good. I am so glad. This isn't spaghetti. We are having slime covered worms."

"No we aren't! If they are worms, where did you get them?"

"Remember how I spent all afternoon in the dirt, digging? You only thought I was digging up the weeds. I was really looking for dinner. Faye, I had to use all of the worms from your worm farm so there would be enough. Thank you. Now eat up. Lots of minerals that your bodies need are in this dinner."

They started laughing and began to toy with their food. At least they stopped whining and complaining about it, even if they didn't eat anything.

By the time I climbed into bed, I was exhausted to my bones, but it was the happy exhaustion of knowing I had worked hard, had a full day, and could now lay down with a happy conscience.

Chantel said…
Brian planted a few herbs in our back flower bed last year. The plants were gorgeous and I loved having the fresh basil and oregano. We didn't realize that the plants were perennial and were so excited to have them come back. He's planting even more variety this year because the plants look so nice in the beds.
May 29, 2015 at 9:30 AM