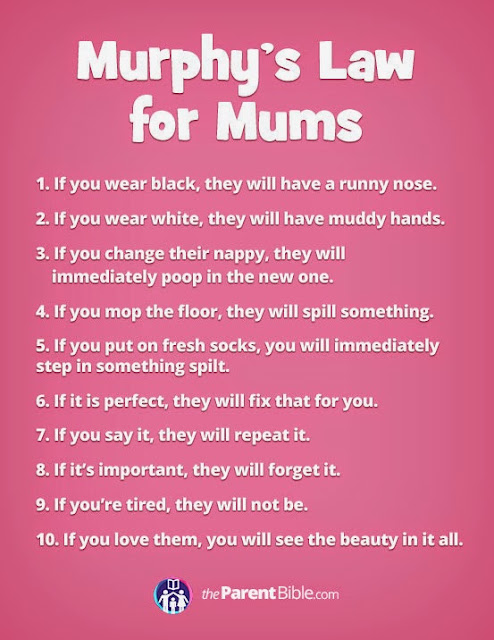 I have always felt sorry for the man named Murphy. As much of an honor as it must be to have a law of the universe named after you, that is one for which I would hate to be remembered.
However, this past weekend was completely dedicated to him, it seems.

In retrospect, I have to laugh because the whole thing is an absolute joke!

It all began on Friday when the cat ran away. We looked all over for her, but she could not be found. Keith and Faye are very good to follow the rule that they are not to leave the cul de sac without our permission. They said they say Tylee in the neighbor's yard and could they please go get her. I said yes, and an hour later, they still hadn't come home. Jeffrey and I got in the car and went off in search of them. Apparently they had not even gone to that neighbor's house. We drove around the neighborhood for a bit before we found them. They were walking together, holding hands, and playing. It was the cutest thing ever to see, so I couldn't be too mad at them. They had completely innocently been searching for their cat, and exploring the neighborhood together. We talked to them about letting us know where they were going, and then we went home. I had an appointment to show our rental property, so I jumped in the van and headed for the freeway.

It was not to be. As I was in the turning lane for the freeway, something happened, and my van suddenly wouldn't drive. I didn't know what was going on, though. I immediately pulled into the gas station and discovered a massive flat tire. It was fearsomely flat. I have to admit, I was a tiny bit excited to change my first flat tire ever. While I was struggling to get the log nuts off, a very sweet couple pulled up with the intent to help me. The husband was able to get the nuts off, but when it came time to pull the tire off, Murphy was hard at work. It was decided that particular tire didn't necessarily need nuts and bolts to hold it into place. It could have been welded on for how stubbornly stuck it was. Jeffrey, my shining knight came to my rescue. We tried WD40, a hammer, kicking the tire, and everything else we could think of. Eventually I was instructed to pack up Beth, who he brought along as a gorgeous curly co-pilot, and to go wait at home. A few hours later Jeffrey arrived with a new tire and deep gratitude for his amazing brother and his "man boots" with the steel toes. Apparently the tire was no match for the likes of those boots. One swift kick is all it took, Jeffrey said, for the tire to drop is grip and restart to the hills, surrender flags flying. I think it is abundantly clear, Jeffrey needs a pair of the magic man boots.
Saturday night, I am happy to report, Tylee came home.
Saturday my temporary crown came off, so we bought some denture glue and figured things were great. Except Sunday morning as I was driving to some meetings, the temporary crown broke. Half came off and have stayed on my tooth. In the middle of my meeting the rest came off. it was awkward and funny, trying to hide the bit of my tooth while carrying on regardless.
Monday I called the dentist to see how soon I could get in and had to wait until the next day for my appointment.
It was certainly a doozy of a weekend,and while I don't thank Murphy, I do honor him for the great stories I now have to tell. Because that is what makes things interesting, the days where everything just goes wrong and you can't help but collapse in your bed at night, wiping your eyes from the tears of laughter you have been holding in. And then years from now I will be able to re-live the chaos with fondness.

Susan Anderson said…
Fun post. Except for losing your crown.