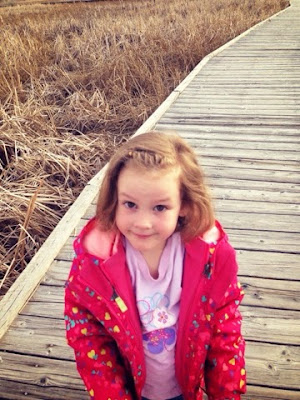 Wow, it really lit a fire beneath them. I love his form of motivation!

Obviously, because Faye is a girl and it takes longer for her to get ready, Keith won.

Wading through the river of tears, I explained to Faye that if Keith spent 2 hours with his dad, that meant we would have the same amount of time together! She was thrilled and chose a walk for her activity with me.

We went to a nearby wetlands refuge. It was beautiful. 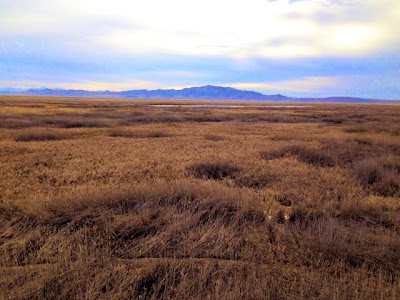 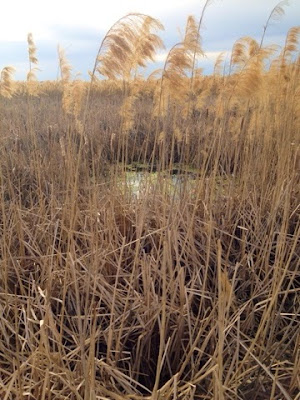 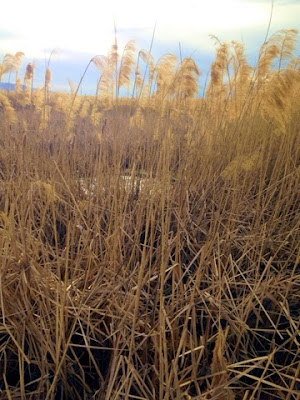 There were so many gnats out, it was hard to get a picture of Faye, as every time I got ready to take her picture a bug would fly into her face and she would squirm. The gnats were amazingly annoying. 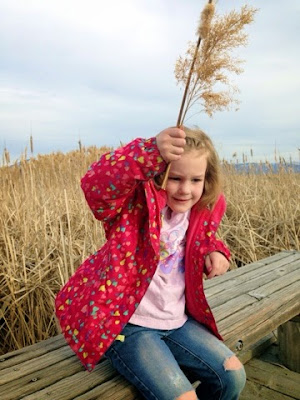 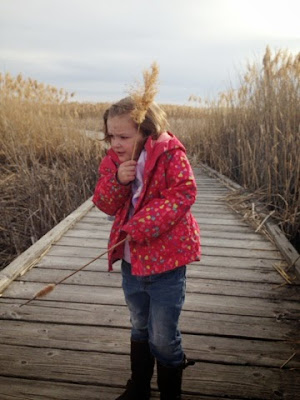 The bugs didn't seem to irritate Betg one whit, however. She loved looking between the cracks of the boardwalk, and oh my goodness, she couldn't get enough of the walk. 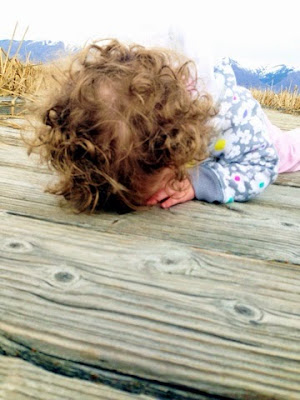 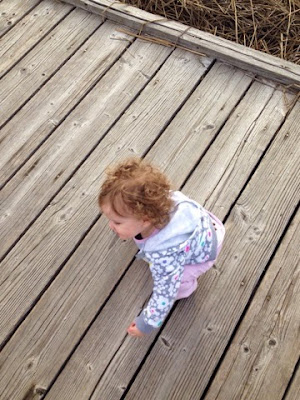 I have to admit, the view was beautiful.  The humidity was rather intense, though. After we made it to the top of the tower, mosquitoes came out in full ranks and we were forced to retreat. 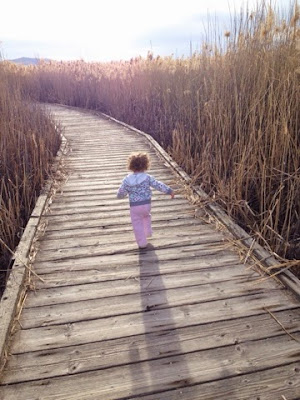 Except retreating with a baby who greatly enjoys the view and doesn't want to leave is rather difficult.  As we were leaving, Beth would lay down on the boardwalk and insist "Uh-uh." 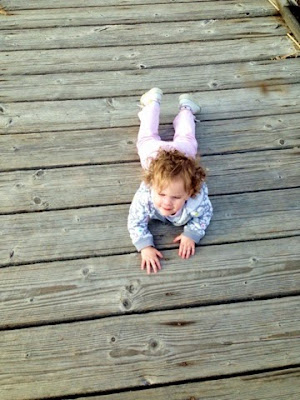 I would pick her up and carry her for a little ways, when she would squirm, and say "Down!" Because she is heavy, and I needed my arms free to swat at the charging brigade of mosquitoes, I would put her down. 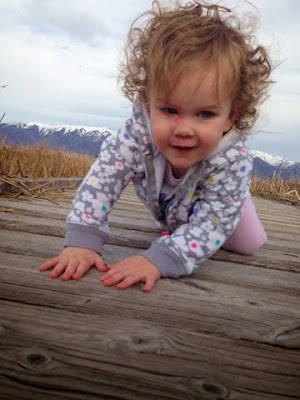 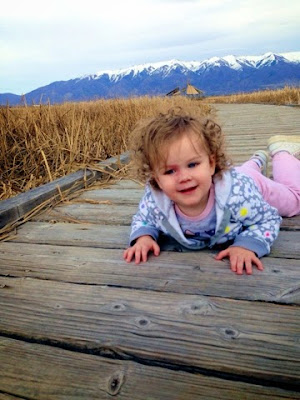 I am happy to say, we made it out alive. I only look like I have chicken pox on my forearms, and it itches about as much, but we are safe, alive, and both girls were ridiculously happy for our girl time. Despite the venemous vampiric bugs, and the sticky sweat clad humidity, it was rather lovely. And quite honestly, I can't really complain, because in truth, I really did enjoy every second with them. How could I not? 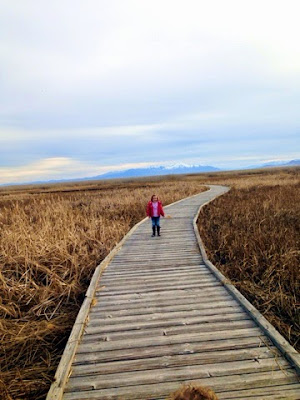 Monday I had a lot of fun preparing for St. Patrick's day.  My mother bought a small nude wooden box for me. I painted it green and then slathered some stain all over it, ending with sprinkling glitter while it was still wet, and it turned out lovely. I was quite pleased with it. 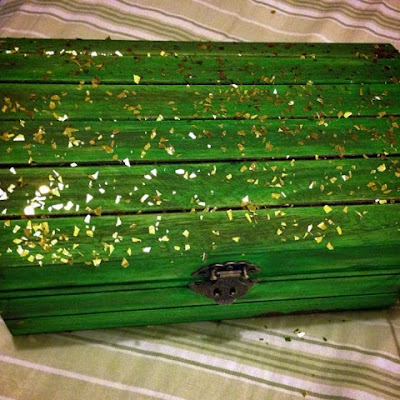 By the time I finished the box, it was ridiculously late, and I was tired. I looked around and the house was a mess.  Instead of leaving the typical footprints and other fun things I do for St. Paddy's Day, I left a few messages for the kids on some windows, mirror, and front door, and then went to bed, intending to get up and do a serious clean up while Faye was at preschool the next day. 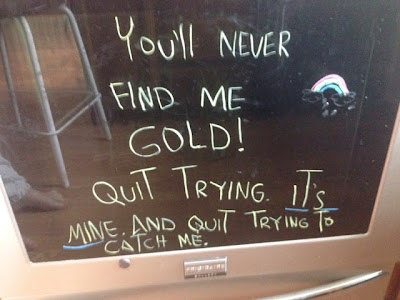 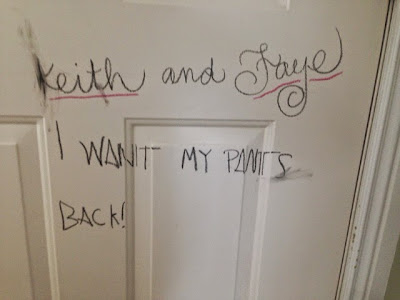 Obviously the kids got to the door before I could take pictures. 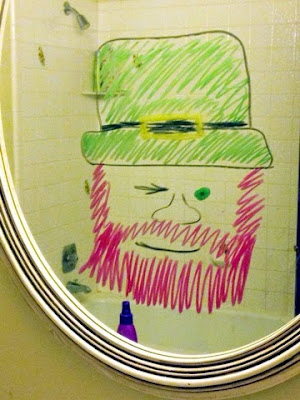 This winking leprechaun in the kids' bathroom was their favorite. They have insisted on showing it to everyone who comes to our house, and Faye asked if we could keep it up for a few more days. It made me laugh. 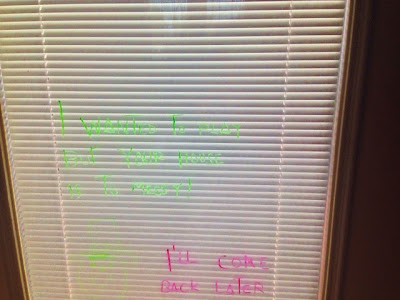 "I wanted to play but your house is too messy! 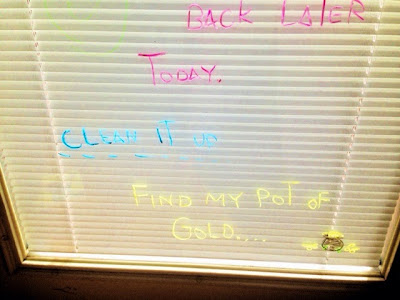 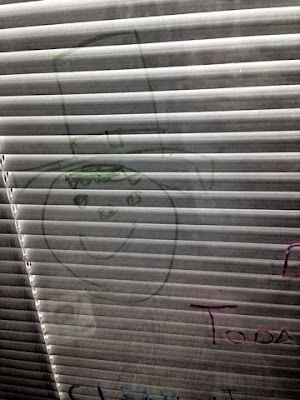 The kids loved the messages so much that they drew a picture of our resident leprechaun on the window next to the messages. Unfortunately, the only marker they could find was a Sharpie. I am hoping it comes off eventually.

However, as Fate would have it, I was not able to get up and clean yesterday, so I could play pranks and leave the usual signs of visitation that they have come to expect.

I woke up, feeling exhausted. My throat hurt like crazy, and swallowing was just too painful.  Also, I just plain didn't feel good. I did the school carpool, came home, got Faye ready for preschool and then Beth and I took a nap.

I have a very hard time sleeping during the day, so it was quite a feat that I was able to sleep!
Which is good because a fever had just developed.

Jeffrey called and told me he was coming home for lunch and I was so relieved. He picked up Faye for me, and I basically slept all day long. By mid afternoon, I looked in my mouth to discover the tell tale polka-dots of strep. No wonder it hurt so much to swallow!

It was fun hearing the kids talk excitedly about the leprechaun stopping by to visit. I am so relieved that I didn't disappoint them, despite my sickness. Keith left a sign of the front door for the leprechaun that made me laugh and "Aw" at the same time. 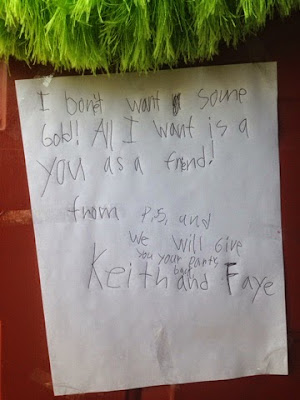 "I don't want some Gold! All I want is a you as a friend! from Keith and Faye
P.S. and we will give you your pants back."

Remember how last year they set a trap and caught his pants? This year Faye also found a jacket. Quite the dapper little fellow, he is. My friend who made the pants last year made the jacket this year. I love it! Faye has claimed it, of course, so I wasn't able to get a picture of it yet.

Jeffrey kept the kids downstairs so I could rest. Just before bedtime, my mommy guilt was a little heavy, so I pulled my tired bones out of bed, filled the decorated box with some treats, put it on the living room floor, and went back to bed. 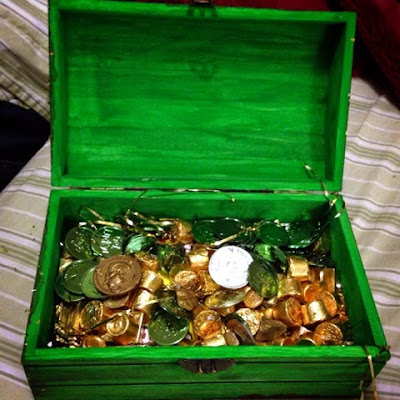 The squealing they emitted could have awakened the dead when they saw the treasure box. I wish I had been feeling well enough to have seen their faces when they discovered it. Their excitement Sounded darling!

Today, I was able to go to the doctor, and I am happily on antibiotics now. I also found out I have a double ear infection on top of the strep, and a vicious cough that if it doesn't clear up in two weeks, they want me to go back. Fingers crossed for health!

Since I have been sick for about a month now, it sure will be nice to get  everything figured out, and healthy again. Beth also has been sick for about two months. Her nose has been so runny, she has crazy sores all over the inside of her nose.  The poor nose was wiped raw, and the constant dripping didn't help it at all. I am so happy to report, I only wiped her nose once today. Victory!

Okay, enough about the health complaints, I am just deliciously happy about the prospect of turning this health corner.

I love her bright eyes and curly hair. So cute.