Putting on the Armor

March 29, 2015
The first weekend of April and the first weekend of October just happen to be my most favorite times of the year. That is when we have the amazing opportunity to hear the Prophet speak to the world during General Conference. The week before General Conference is the General Women's meeting for the Church. If you are counting, that meeting was last night and it was beautiful.

I have a friend that I have known since I was too little to even remember. I remember playing at her house when I was very little, and she moved away when I was three. Because life is so busy, even though she lives nearby, we only see each other twice a year, and that is at the Women's Conference. I love that we get to catch up and visit and check in with each other twice a year. It is something I really look forward to.

At the meeting last night, though, the message made me realize that I really need to step up my game when it comes to teaching my children in our home. I am so glad for the inspiration and the guidance that I received last night.

The problem is I am a morning person. Faye and I are morning people. The boys are night people through and through, so finding a time to do family activities that require more effort than watching a show together (where we can all just cuddle on the luvsac) or having a read-a-thon is hard because  by three in the afternoon I am ready for the day to be done and to just go to bed. My energy basically leaves around that time, and it is really hard for me to be organized or patient enough after dinner to do more than just send the kids to bed.

Tonight, though, I was determined to follow through with the promptings I received last night. While Beth was napping and the kids were playing downstairs, I lay in my bed and figured out a lesson to teach the kids. I figured beginning with the Armor of God would be the best way to introduce doing consistent Family Home Evenings. 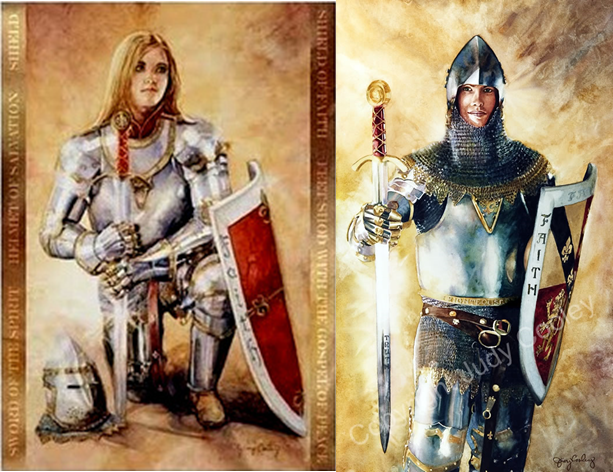 Keith brought up a Lego guy in full armor, and we used him as an example. We also did the orange experiment. While Jeffrey was reading the scripture in Ephesians, we had an orange floating in a glass jar. After each part of the armor, I took a piece of the peel off and placed both back in the water with a comment like "Oops. This guy just told a lie. He doesn't have his loins girt about with Truth." By the time we had stripped the orange of all its armor, it was no longer floating. It was no longer lifted up. We talked about the things we need to do as a family to be strong and to keep our Armor of God in the best condition it can be. We ate the orange, and then read scriptures as a family. Keith wanted to start in Ether, which I thought was great because they practically have the first 10 chapters of Nephi memorized. And then we had family prayer and sent the kids to get ready for bed.

It was lovely. I really hope I can have the energy to do this every night, because I know how important it is, and sadly, I know that bedtime is my weakness.  I just want to be in bed at the time we are usually getting them ready, so I have a hard time putting a lot of effort into it. I know that makes me sound incredibly lazy, but there you have it.

The best part was when the kids started to argue over their toothbrushes. They were trying to brush at the sink at the same time, and supposedly Faye spit into Keith's hair when he was leaning over the basin to spit out the toothpaste in his mouth. And so when Faye wasn't looking, he spit in her hair. Funniest bit about this is my mom could (and probably did) tell this exact story about my brother and me brushing our teeth at bedtime. When the inevitable fighting began, I simply asked them which part of their armor they were removing, and the fighting stopped instantaneously. It was lovely!

We decided that we are going to be studying the Family: A Proclamation to the World together. We are going to take it a section at a time and spend however much time we need so they can really understand before we move on to the next section.

Also, since Keith is the only child in Senior primary who hasn't been baptized and we are doing a weekly Faith in God challenge, we decided that he can start working on it early. That is not to say that things will be passed off, but I figure if he begins the habits now, it will be that much easier for him once he is 8, and earning that Faith in God award will be a lot easier for him.

I am so excited for conference next week! For information on how or when to watch it, click here. All are invited to come, listen to the word of God through the mouth of a living Prophet!
Family Time FHE Gospel Inspirational Learning Motherhood My Mistakes Religion