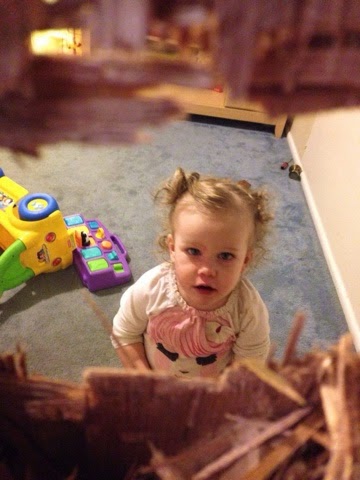 Yesterday we were forced to do some emergency renovations on the house.

I was fixing lunch and I could hear the girls down the hall, playing.  We had just come in from a lovely walk, relishing the emergence of Spring, and our appetites were whet. I heard a door close, and Faye bounced into the kitchen, plopped down at the counter and complained loudly that she was hungry. I laughed because she always does that when I am cooking, and told her to get her sister and we would eat.

She jumped out of her seat and bounded out of the kitchen, anxious to get the task out of the way so she could get some food in her belly. A minute later she came back, telling me she couldn't get Beth to come.

This is a very common excuse, so I sent her again, telling her no food would be served until we were all there together.

Again, she left the room, and came back with the same report.

I had finished cooking, so I went down the hall to see why the baby didn't want to come eat with us.

Her bedroom door was closed.

With a smug look, Faye told me she couldn't get the door open. Thinking Beth was merely sitting in front of the door, I grasped the handle and gave it a sharp twist.

Only my hand slid around the handle, and the doorknob didn't budge.

Before I continue my narrative, I feel it important to mention that merely a month ago Jeffrey and I had talked about the hazard of Beth's room. There is a lock on her door, it was there when we moved in, and we don't have the key to it. We had discussed switching the doorknob with the linen closet door, and then we went to sleep. We couldn't do it right then because it was very late and it would wake her up if we tried. By the next morning, both of us had completely forgotten our plan to change the door knob.

That moment and conversation flashed through my head as I realized that the door was locked from the inside.

I tried to remain calm, while Beth was knocking on the door patiently, and saying "Lunk," persistent with her little knocks.

I ran down the hall and called Jeffrey. He wasn't a lot of help since he was at work. My next thought was to call my dad who has jimmied open a lock with a credit card many times.  He didn't answer his cell phone. In that moment, my panic began to rise. I could still hear Beth knocking and asking for lunch, and I felt so helpless to get in to her. Because of the panic, I couldn't remember the name of the company my father works for, so I couldn't call him at work. I called a few other friends, one who suggested I look on Youtube for a video on how to pick a lock.

All the while, the panic was continuing to rise.

I paced the house, I wrung my hands, and I nearly cried. I could hear her calling me, and I couldn't do a thing to help her. I worried that she would soon get scared or frustrated and begin to cry, and I would be left on the other side of the door, listening, wanting with all of my heart to be on the other side of the door as she was, but not being able to comfort her.

Meanwhile, Faye was eating all of the meatballs I had made for lunch. I hadn't had a chance to make anything to go with them before all of this happened.

My hands were sweating, my heart was pounding, I was anxious, and worried, and prayed over and over that we would be able to get to her soon. I had visions of her being stuck in there all afternoon, and it made my heart ache.

And then my knight in shining armor strolled through the door with a plan in his head and a hammer in his hand. 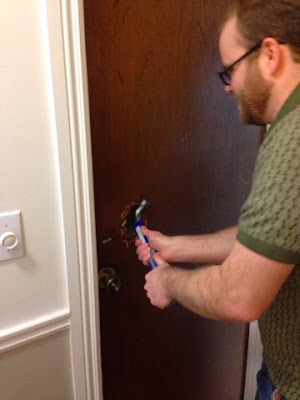 He knocked a hole in the door, reached his hand through, and unlocked it. 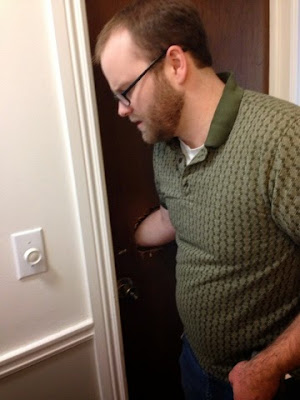 He picked up the baby, gave her a hug, placed her in my arms, gave me a great kiss, and strolled out the door and back to work. 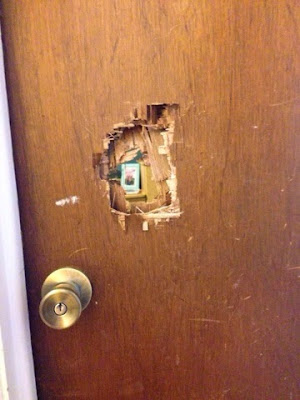 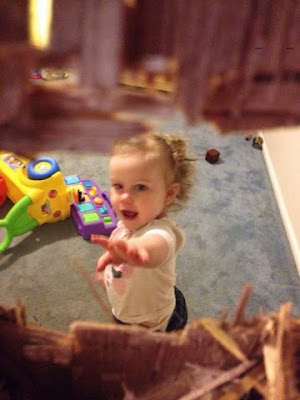 Which is why the baby's door now has several patches of duct tape all over it. 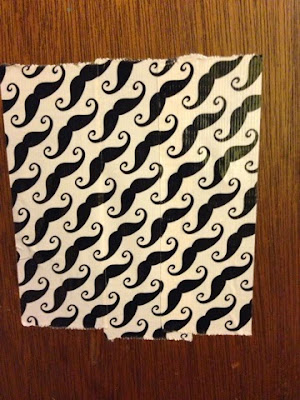 Let's not discuss my OCD, though, okay? I just like things to be neat and uniform.
Beth Faye Motherhood

Jenny said…
Oh man! I remember these times! And with the cars doors, too. I'm glad your hero was there! And I like your 'stache' tape!