Shovel To The Face 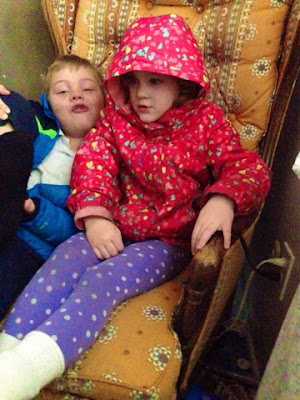 It was a beautiful quiet afternoon today. Just still and muffled with those lovely cotton echoing clouds that were as grey as a noir film. I was working in my bedroom this afternoon, reveling in the rare quiet that comes from the echos of the children playing outside bouncing off the house and a sleeping baby. The infrequent quiet that is always interrupted too soon. Today's interruption came not 2 minutes after the kids went outside. The bright and happy echoing laughter outside suddenly turned sour which was noticable as the whole energy of the house changed and seconds later Keith quietly came in the house. He had tears mutely rolling down his face and he was trying desperately to keep the tears in and be quiet so as not to wake the baby.
I love that he is so considerate. Had it been Faye, she would have burst into the house, slammed the door, and with all the dramatics she could muster would have stomped down the hallway like an elephant stampede, wailing like an angry banshee, ready to unleash her fury or have me deliver a swift justice to her offender. But Keith, he is an altogether different sort of child. He quietly closed the front door and tiptoed down the hall so as not to wake the baby, and came into my room, whimpering.

I immediately jumped up and gave him a hug, wiped away his tears and asked him what was wrong.

With tears spilling down the rosy cold cheeks, he whimpered "Faye hit me in the face with a shovel."

"Faye hit me in the face with the snow shovel," he repeated. I told him I had heard him the first time, I just didn't want to believe it.

At that point, the dramatic Faye came flying into the room, snow covering her boots, face set in an angry and injured expression.

"Well, it's not my fault! The snow made me do it." she exploded, "He threw snow at my back and I didn't want him to."

It was hard to not laugh at the absurdity. Keith wanted to have a snowball fight with his sister and she quickly turned it into a jailhouse brawl. He threw some snow at her which hit the back of her coat. No snow touched her skin or hurt her in any way. Like an unpredictable tornado she quickly turned on him. Lucky she doesn't know what a shank is! At least we know she can and always will take care of herself.

Faye and I had a long talk then, about how it is okay to not want to participate, but it isn't ever okay to hit someone, especially not with a shovel! She felt bad and began crying because the gravity of her actions began to sink in.  That girl is going to have a hard time in school if she doesn't get her temper or her violence under control quickly! I have a lot to work on with her.

I admit, when I was telling Jeffrey about it, I had a hard time actually getting it out because I was laughing so much. What a funny story. Her reaction outweighs the perceived insult by so much it is ludicrous and hilarious at the same time.

And then they made up and were best friends again.
Like always.

After the drama, we had a Harry Potter party where we finished the first book again. While we were reading, Beth entertained herself in the kitchen. 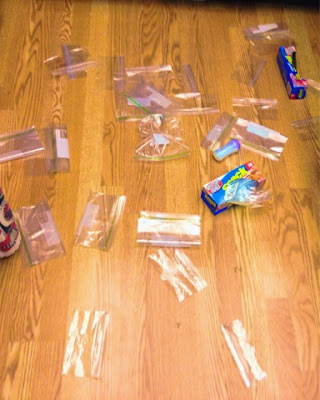 Because boxes are pesky and slippery transparent booby traps are so much more efficient at home security. A la Home Alone. At least she and the cat had fun today and stayed out of trouble while we were reading. And you can't tell, but she is currently in an anti diaper mood and thinks it is the funniest thing in the world to go around bare bummed. 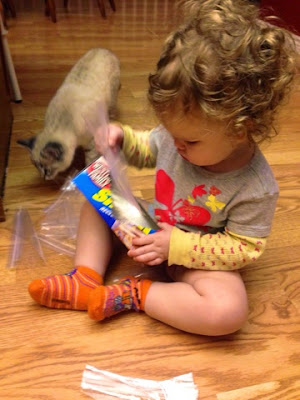 I would say "at least she is entertained," but who am I kidding? Her sense of humor and particular form of rebellion have me in fits of laughter all day.
Gosh, I love being a mom!

Francisca and Chris said…
LOL! I wonder if "the snow made me do it" would be a permissible defense in a court of law? I agree, all you can do is laugh! With three in 18 mos these jailhouse brawls, unexpected messes, and all around cuteness is the modus of operandi in our home too but honestly it is the spice that makes life nice.
January 18, 2015 at 9:55 AM