Rosy Cheeks, Fresh Bread, and the OR 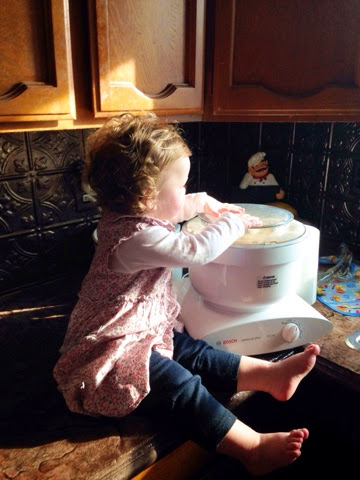 This. Right now. This is my favorite time of the day.

Keith just got home from school and is outside playing with Faye in the snow, or what little bit we have left. Beth is just waking up from her nap, making little cooing sounds in her crib, and the kitty is sleeping on my feet, purring away and keeping me warm.

I love hearing happy sounds from the children. Nothing is better, seriously. Except maybe watching the cat execute a stretch too close to the bed and fall off.  Yes, that just happened. It may have made me laugh a little too much. But that is why we got the cat, right? For my own personal entertainment.

I really should do an update from yesterday but I don't want to right now. Right now I want to talk about how nice it is to have a routine again. How the sun is angled just so creating the perfect glow in my bedroom, like a soap opera, that fake lighting but is really real and perfect. I want to talk about Beth making kitty sounds, mewing from her bed, or Faye and her newly discovered sense of style.

But I really should talk about yesterday before it fades, though it isn't nearly as interesting as all the aforementioned things.

It was just a regular day in the beginning. I took Keith to school and then took the girls to a friend's house so I could go to my doctor appointment to make sure the miscarriage had happened and all was well. Except while I was at my appointment, my midwife did an ultrasound and said she wanted a second opinion and sent me to the doctor that is over her. His office was at the hospital across town.

I went to his office, they squeezed me in, and he talked about just doing a blood count to make sure I was okay on blood loss, and then letting it just take care of itself. He said I would probably bleed for another week or so, but I would be fine.Or, if I really wanted to be done with it all, I could schedule a D&C which would take place in a week or two, whenever they could fit me in to their schedule in the OR. But really, the blood count should be fine and that is what he was recommending. He was very close to just doing that, when he suddenly decided he should probably do an ultrasound as well.

During the ultrasound, he frowned at the placenta. It looked wrong, he said. Just in case of a molar pregnancy he wanted to get me in for a D&C asap. Either that day or the next, but before it could pass.  He said he doubted it was molar, but wanted a sample just in case because it is better to be safe than sorry.

And with that, my regular kind of day was flipped into a mad mess of rushing about.

He had his secretary schedule with the other hospital for a spot in the OR that day so he could do the D&C. I got to go register and do all that fun stuff, go home and pick up Beth so she could have a little nap, check Keith out of school and take him and Beth back to our friend's house (thank you Adrienne!) and then rush back to the hospital so I would be on time for the appointment.

Everything went very smoothly, which was wonderful as my other experience with a miscarriage landed me in the hospital overnight due to excessive bleeding. We finished, and while I was trying so hard to wake up from the anesthesia, I got to answer a bazillion messages that had come in while I was under. Some appointments I had forgotten to cancel, and other things. It was a madly chaotic sort of day.

But I did get a new mug! I had just thrown mine away about 2 months ago, so the new mug bit made me oh so happy! 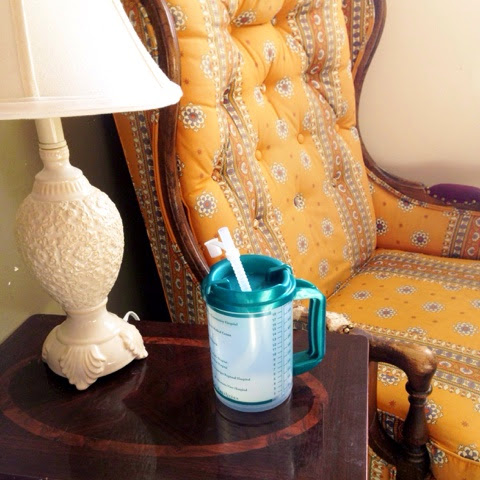 That may be my favorite part about giving birth. Aside from getting a new baby, of course.

On our way home, Jeffrey and I stopped by Cafe Rio for some much desired food. Neither of us had eaten since breakfast. Me because of the whole OR thing, and Jeffrey, because he is sweet and was worried so couldn't eat. He figured he would eat when I could. I tried to tell him that was silly and he should eat as it would help to calm him a bit, but he was being gallant and wouldn't.

What a day, I tell you! But it is wonderful to have things back to normal now. And I love that I can dote on my sweet little chidlers all day today. Because they deserve it and I didn't get to spend time with any of them yesterday. So, my plans for today are to play with the kids and bake bread, because fresh baked bread is just the greatest thing in the winter. Year round it is good, but it seems to have a better flavor when the kids come in from playing, cheeks all rosy, fingers and toes numb with cold, but with appetites raving and craving something warm and hearty. That is when I love to feed them fresh hot bread the most.

And that was my very boring but busy day yesterday.


All About Me Health Me

Emmy said…
Oh girl, I am so sorry. But truly you are amazing, amazing that you are able to get back into things so so soon, amazing that you can find the good in things too. I wish I was there to give you a hug! You are truly amazing.

Glad you linked up.