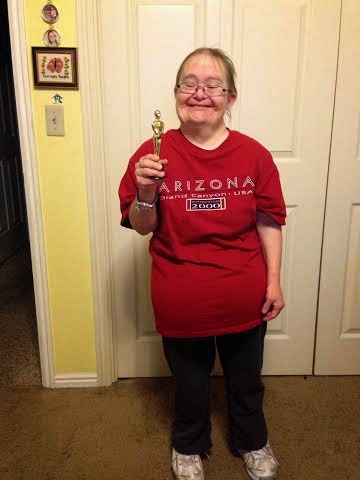 Friday morning, Faye and I decided we were going to have a tea party.

It was our last day of watching Mimi, and we decided it would be wonderful to celebrate with her.

We went to the grocery store and browsed the isles, carefully deciding what would go best with our impromptu afternoon tea. We invited one of Faye's friends to join us, and we set to work straightening up the kitchen from breakfast and getting out the pretty dishes and everything we would need. I also found some ridiculously large diamond rings at the dollar store I thought would be a fun way to surprise them all with.

While the girls played and Mimi flirted with Captain Kirk on her ipad, I chatted with my friend (Faye's friend's mom) and chopped vegetables, arranged foods and heated up the water for the cocoa and postum. I set the table all fancy like, and then called everyone to lunch.

The girls burst from the family room, exploding up the steps like a cannon blast. There was confusion, clattering chairs, jostling elbows as everyone fought over who would sit where. My friend and I got to intervene to establish peace among the warring nations of who wanted the stool and who would get the purple ring. While they had been playing downstairs, they had been going through the dress ups, getting ready for their elegant and fashionable afternoon tea. 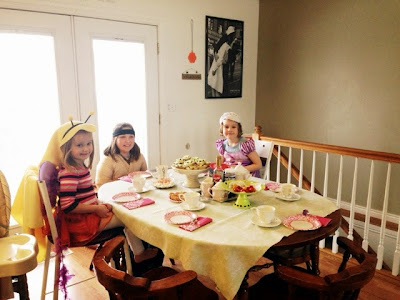 I established the rules for the guests who do not often join us for our teas. No slurping, manners are enforced, pinkies up, and above all, you must use a British accent. It doesn't matter how atrocious it is, no one there will be judging, but you must at least attempt. I would also accept Irish, Scottish or Welsh, but that is all. In fact, if anyone ever actually pulled off a decent Welsh accent, I think they would have won the tea party. 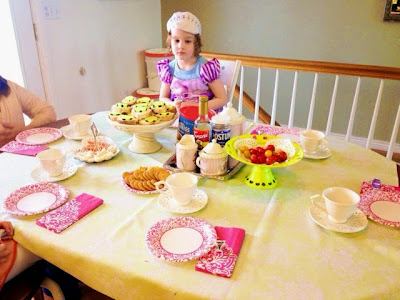 Once rules were understood, we had a blessing on the food (it was our lunch, after all), and the festivities began. 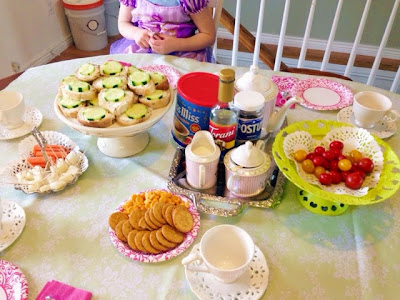 It was so much fun! I love playing dress up and tea party with Faye and the girls. I love helping them feel so grown up and special. It is also delightsome to me to be able to teach the girls a little about other parts of the world. Granted, we do have a very stereotypical afternoon tea. And it is just for fun. But about half the time, questions do come up from the girls about England, or other parts of the world. We talk about monarchies, or governments. It can be like a world Civ. class, albeit much more fun.

We chatted, and the girls laughed and impressed me by eating all of their vegetables. They politely excused themselves when they had finished eating lunch and went downstairs to play.

Mimi loved it. Every second. The laughter, the girls, the huge fake diamond ring. She loved the food and just gushed over everything. I love her so much and we are really going to miss her being around every day.

My friend Kati had to leave to pick up her daughter from school so she left her girls and while she was gone I cleaned up the lunch and got out the dessert. It was arranged all nicely on my dessert trays with doilies beneath the dainty eclairs and cookies. When Kati got back with her daughter and Keith was home from school, I pulled out two more tea cups and saucers, gave them some hot cocoa, and called the other girls up for dessert.

And a repeat of lunch.

Mimi basked in the energy and excitement of all of the kids. She beamed as they shouted and laughed and quarreled. She loved when they asked her questions and simply glowed with the excitement and joy of the special tea party we had for her.

All too soon it was cleaned up and put away. The kids went back downstairs to play, and Mimi went back to scolding the girls who were kissing her boyfriend, Captain James T. Kirk of the Starship Enterprise. And then her sister came to pick her up, and took her home.

And that is the last time Mimi will be here.

Saturday morning Jeffrey and I took the kids to my parent's house, and then we went to his parent's house. My job was to keep Mimi occupied. Jeffrey helped his mom, sister and uncle move all of Mimi's belongings to the assisted living center she will now be living in. It was a very difficult decision for my mother in law to make. We all just love Mimi, and it will be hard on both her and my mother in law, who has been her primary care taker for more than ten years now, not to mention the years she spent watching out for her little sister who has Down Syndrome, all growing up. But the center is within walking distance of my in law's house, so visiting will be a fairly easy thing to do. It is just hard, is all. To not have her around all of the time. But I agree whole heartedly with my mother in law that it is time for her to have the extra help she needs. 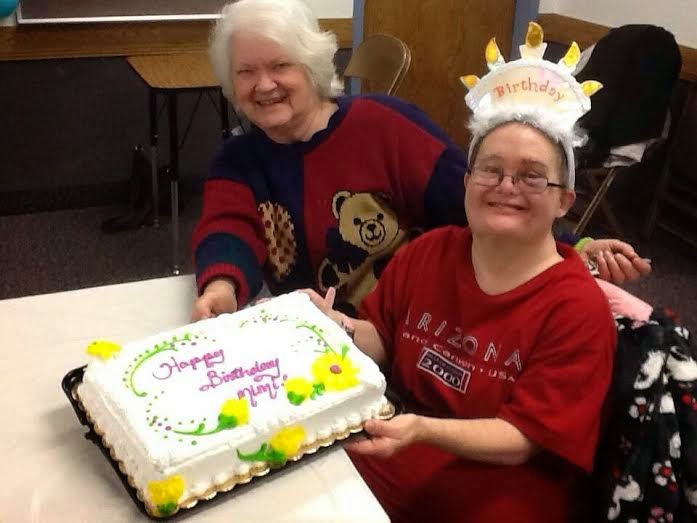 Maybe it was a good bye tea party for Mimi, and maybe it was to appease my own... whatever emotion it is that I can't find a word for. Either way, it was a blast, and I am sure glad we did it. I am plotting out plans in my brain for when the kids and I can take a tea party to Mimi in her new "apartment."
Creating Memories Mimi

Emmy said…
What a fun tea party! So wonderful too that Mimi could be part of it and that your kids have had the chance to have her around.
January 23, 2015 at 3:06 PM