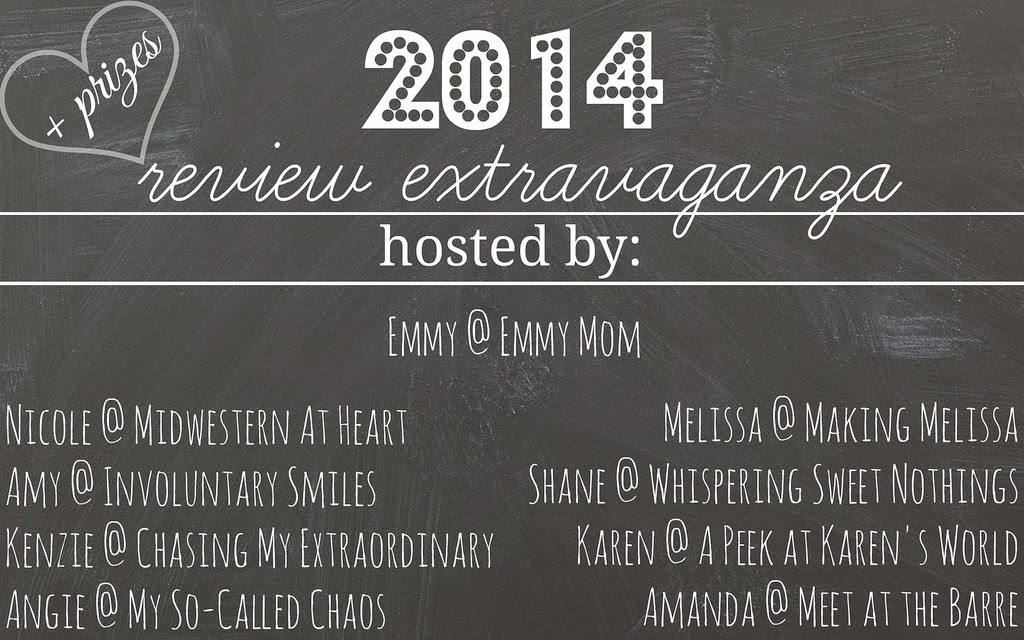 Week 2 of the Blog Review Extravaganza (ganza, ganza)! I never get tired of announcing it. Remember, if you haven't yet linked up, you still can, and will be eligible for the prizes, just not the bonus points for linking up every week. Just do half a year instead of the three months for the post. Easy-peasy. Also, for info on the rules and prizes, go here.

Before I continue, I have to rant for a second. All of my beautiful photos have somehow been erased! I am not sure what happened, but I blame Picasa. When I have a spare moment, maybe on Christmas Day, or New Years Day, I will sit and pull out my backed up photos and see what a great detective I am to guess which photos went where. In the mean time, please forgive the lack of photos, I really am not sure what happened!

April was a great month. Of course, I say that about all the months. But really, April is when the living was beginning to happen. Our house was mostly unpacked, and we were able to just relax and enjoy ourselves. After months of thinking about it, I was finally able to name our abode. Moon Hollow is our home's name, and I love it. It is so fitting.

April was the month that Faye took her first steps to becoming a Glam Rocker from the 80's. I blamed it on the eclipse, of course. Because all weird out of the ordinary things that happen are because of the eclipse, right?

Also, I learned that it is a truth universally acknowledged that a mother in possession of small children must be in want of a nap. Because babies contemplate concussing themselves, little girls decide to artistically express themselves with an orange Sharpie on anything they can find and then while preforming acrobatics, they like to cut their hands open. You know, just the regular stuff.

May is when my life became infinitely more busy. And my blogging decreased greatly. I was called to be the primary president and suddenly the rhythm I had just found in my life became increasingly syncopated. As a result, Faye imagined me being in primary with her was a perfect excuse to let her sass out full fling.

In the middle of May, I received news that makes my heart leap with joy every time I think of it. I re-encountered a man I had worked with as a missionary in California. He had been the ward mission leader for my last area, and he told me that a man I had worked very hard with and was very invested in had finally kicked his nicotine habit and been baptized, as had his sister. I grin from ear to ear every time I think of this, I kid you not, and though I had tried to keep in touch with him, I look with great anticipation to the day I will be able to meet him again and share this joy!

I did a lot of walking with friends in May, and one day we walked a trail near my house. While walking I was struck by the beauty of a single flower growing in the middle of a rushing stream. Despite pebbles bouncing against it and the constant pull of the current, that flower stubbornly grew, and it became a wonderful metaphor for my life.

June was all a bit of a blur, really. I didn't write much at all because of my new calling. I had great trials with a counselor, of which I wrote nothing because I didn't want to offend, but it was a hard time and so I was scarce in the blogosphere. I did make a confession, though. Caffeine was the only thing keeping me functioning at the time. I understand caffeinated mothers so much more now!

And that is my whirlwind of the spring time. I wish I could say things calmed down later, but I am still waiting for the eye of the storm. Something tells me it will only come once my children have grown up. Sigh. The irony of it all. Being a mother of young children is so exhausting and difficult, but when they are gone (as I am constantly reminded in the grocery stores) it is a time I will look back on with longing and fondness. Good thing I will have this blog to help me remember the chaos and love it even more!

Don't forget to link up so you can be entered for the prizes!

Looks like lots was going on in your months.

oh that's so sad all your photos were erased. I lost mine once buy it was right after I was married and switched emails, closing the other down. Good luck figuring out what happened!
December 18, 2014 at 2:49 PM

Kenzie Smith said…
I'm sorry to hear about your photos! Yikes! Sounds like your life started getting really busy! I have had a few days where the only thing that kept me going was caffeine.
December 19, 2014 at 3:51 PM

Emmy said…
Did you maybe use up too much memory with picasa, I know some of them only give so much free memory and you have to pay to get more. That happened to me with photo bucket, so ended up having to pay for extra so I could get my pictures back. I use flicker now.

So so awesome about that man you taught on your mission! Shows you should never give up on people.
December 28, 2014 at 4:47 PM