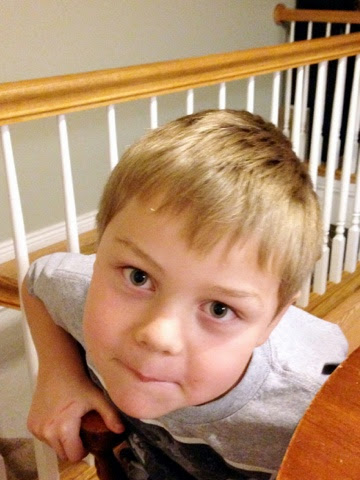 For Christmas Keith got a calendar which he promptly hung on the wall in the kitchen. It has lovely pictures of light houses on the sea side with the ocean spray exploding over them and is quite exciting for an inquisitive seven year old boy. During dinner tonight, he was studying the calendar and saw Martin Luther King Jr Day. He d asked who that was, so I gave him a brief history lesson.

I told Keith that a long time ago, people with dark skin were treated horribly. We talked about segregation and the cruelty of it all. I then told him that MLK  Jr was a great man who fought against the unfairness. He helped to rally the people and do peaceful resistance.  They even organized a huge March to the white house. I told Keith about his famous speech and how he believed people should be judged for the content of their hearts and not by how they look.

Keith said "So, it matters that I am beautiful on the inside even though I'm not on the outside? "

I told Keith he is a very handsome boy, and asked why he would say that?

He patted his gorgeous plump and oh so edible cheeks and said "I can't be with these. "

Seriously, have you seen that boy? With his Aryan features, and his innocent yet old eyes, how could you not swoon?  I told Keith it was impossible for him to not be handsome, because his day is so handsome and that Keith is already doing some lady killing. Every day after school he tells me how annoyed he is that the girls always want to chase him and he just wants to play football. I explained to my boy that his daddy had those voluptuous checks when he was little, n and I had home go check his dad's face to see if they were still there. Of course they aren't, so Keith was relieved and began teasing his dad, which led to him tearing out of the room in a fit of giggles. My favorite sound in the world!

So I am wondering what is going on that all these kids are having image issues. Is it just my children? At least we seem to have resolved it with Keith this time r around. And I love that he knows he is beautiful on the inside!

Email ThisBlogThis!Share to TwitterShare to FacebookShare to Pinterest
Labels: Keith