What We Did Without Internet or TV

Today we are going to play a game I have gotten really good at.  It is called catch up.

We did a whole lot of playing during the time with no internet.  The kids are still doing a lot of playing because there is no TV.  We haven't plugged it in yet.

As per my goal, we were sleeping here by Christmas Eve.  Granted, I was up until 2 am cleaning and decorating Christmas Eve so that we would have a tree, stockings and the lot up when the kids woke up in the morning.  The kids did help me decorate the tree.  In fact, we decided that a new rule would be if the tree didn't get set up until Christmas Eve, the kids are in charge of the decorating.  They love that rule.  I am hoping to never have to implement it again, though.  They had a blast decorating the tree, and it was very lopsided, but they loved it and I left it they way they had decorated.

We didn't wrap the gifts, though, because by 2 am I was done and just wanted to go to bed.  Also, I realized we didn't have any wrapping paper.

I saw a great picture on Pinterest one day.  The Get Along Shirt one. 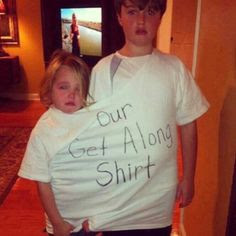 One day my kids were not getting along.  There was constant fighting and bickering wherever they went.  I decided I would try it.  I found a large shirt, and made them put it on.

The result was startling.
They loved it.

They told me yesterday they try to get in trouble and make me mad so that they can wear it again.

I got to unpack my tea sets, and to celebrate, we had a tea party for lunch.  I love doing it, but sometimes it is a lot of work.

For the memories.  I just tell myself that, and it makes it all worth while.

I have been trying to come up with new ways to work with Faye on her letters.  She shows a shocking lack of interest, and so I have to really stretch myself.  Keith was easy.  He practically knew them from birth.  Just goes to show the different learning styles.  Keith's is so much easier for me to understand as it is a lot like my own.  Faye doesn't really care and just wants to play.

We have been playing a lot of Bingo until I get the time to peruse the internet to come up with other ideas.

Happily, though, since Keith has begun to really read, he has been reading to her, and she has been showing a lot more interest.

Really.  He picked up this book (a collection of Dick and Jane stories) and has been carrying it around with him, reading it every chance he can get.  I hate to interrupt him to get him to help put his things away, because I really want to foster in him a deep love of reading.

But he has been a life saver with helping read to Faye, and trying to teach him the things he learned at school. I often walk in on them, with their heads over a book, Keith reading and Faye studying the pictures.  It makes my heart happy.

It is nice to have them so occupied and not even missing the TV.  Keith has asked a few times when it will be set up again.  Not because he wants to watch shows, but because he wants to play video games.  I am trying to figure out a way to keep him from doing that all the time, though, as his bedroom is in the basement.  Keep the controllers locked up maybe?  I don't know.  We will figure something out.

While I have missed the ability to blog, I have to say, I certainly have not missed the TV, and have loved seeing the creative play my kids have been up to.  Even more, the fact that Keith has initiated playing in the snow!  For the little homebody, that is quite an achievement.  Though Faye typically stays out much longer than the does, the fact that he goes out on his own will just thrills me and makes me think there may be hope for him yet!

How awesome! I wish were closer! I would love to see your house. And no TV sounds awesome!

Avy shows a complete lack of interest (and a lot of tantrums when we try) with letters and even though she and Faye share the same birth year, hers is earlier so she starts school in the Fall. We are not ready and I hope I have the patience to get her ready. Your new house looks just lovely in the pictures.

Love love those reading pictures- so perfect and what a great moment. I too love when my kids read. I seemed to slip over Christmas letting my kids watch way too much TV-- need to get better about limiting their screen time again.

I do not have the strength within me to remove the tv. It's gotten bad, I know. and we only have 1 set.