You Miss What You Can't Have and TBI 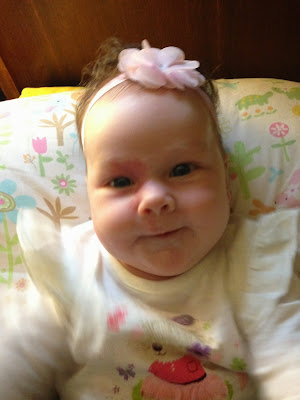 I have been laughing at myself all day.

Not the good laughing at someone, but the kind school kids do to the poor child who accidentally wore two different shoes to school.

It amazes me how quickly we can become used to something.

For the past four nights Beth has been sleeping through the night.

She goes down for the night at 7, and then would sleep until sometime between 5 and 6:30.  It was glorious! I became accustomed to it rather quickly, I must say.

And then last night, she decided to wake up around 1.

She was just really hungry.  Understandable, I know.

And I didn't mind getting up to feed her.

But today I have been dragging.

After only four nights, my body had become accustomed to the full night's sleep, and had quickly forgotten how tired I had been for the past two months or so.

Today it hit me hard, and I remembered.

I am hoping it was just a fluke.  The waking up last night, not the sleeping through the night.  I especially don't want that one to be a fluke.  That one should be more of a habit.  Sleeping all night, uninterrupted is glorious.

Amazing how appreciative one can be of the little things in life when they had been deprived for a brief amount of time.

As I was driving Keith to school the other day, a rather serious add came on the radio, and I couldn't help but laugh.

I tend to be a hypochondriac, which makes having a doctor in the family very helpful.  As I listen to adds about sickness or anything like that, I always do a mental checklist.  "Yup, I have that, that, not that, that..." etc. Just out of habit.  Even if I know that I don't have a problem with the thing they are talking about, or the thing I am reading about, I always do that mental checklist.

So, as I was driving, an add for TBI (traumatic brain injury) came on the radio.  They were saying:
"If you have headaches, fatigue, forgetfulness, or frustration, you should see a doctor as these are all signs for a traumatic brain injury and could be life threatening."  I laughed as I went down that checklist.  Without receiving any injury, I have all the symptoms.  It is called being a mother.  Those symptoms are in the job description.  I have heard people joke about having a Mom Brain, and blaming things that sane people would never do but a mom does on said Brain.  I have experienced it, but called it pregnancy brain (it exists, people!  I don't care what anyone says, it exists!  When I was pregnant with Keith I decided to go for a walk.  I got all ready, stepped outside to tie my shoes, stood up to go and realized I was not wearing any pants!  Pregnancy brain really exists, because I would never in a million years step out onto our very busy street without being properly clothed!)  Having kids somehow kills brain cells.  That is all I am saying.  And somehow or other, we become like victims of TBI.  By choice!  I just have to say, mothers are the greatest people in the world.  I may be a bit biased, but I stand by it.  To willingly give up perfectly good brain cells to chase little kids around all day, stay up late into the night, and do all of the things that are required to be a mom is nothing short of amazing.

So wear that Mom Brain head high, and know that it is all for a great cause!
Beth Motherhood

You are so funny. And I agree on the Mom and pregnancy brain.

Of course, every mom has to do what she feels is best, but Amy, you don't have to get up and feed the baby in the middle of the night, even if she wakes up. Now that you know she is old enough to sleep through the night, as evidenced by four nights of having done so, you just encourage her to reach her fullest potential by not reinforcing the waking up behavior that she no longer needs. Whenever our kids learn anything, they do it a couple of steps forward and one step back, right? (Or in this case, four steps forward and one step back.) What WE do for them is reinforce the positive behavior...the newly learned skill, and ignore the other one so as not to reinforce it.

It's okay to let her cry, reminding her that people need to sleep at night, and allowing her to perfect this skill.

There, opinion over. And remember, it's just my humble one...

Crystal Collier said…
LOL. It's so true. Having kids takes so much more out of you than just the nutrients poured into their developing body. That's why all women who have bourn and raised children deserve an eternal place of glory. :)