But we have plans for tomorrow, which I am hoping will help redeem it.

You remember the car accident on Monday.

On Wednesday, before picking Keith up from school, I ran to the grocery store.  I packed things into my cart, rushed through the check out, and hurried out to the car.  I checked the time and realized that I was going to be late picking Keith up from school.  As I was loading the kids in the van, I noticed 4 packages of peanuts which had been hiding beneath Faye's car seat.

Which had not been paid for.

And I was already late getting Keith from school.

And I hadn't paid for the peanuts!

And so I did the unspeakable.

I put the peanuts in the van, and rushed off to get Keith from school.

I was late getting Keith.  I felt bad.  He was the last child standing all alone in front of the school.  When he climbed into the van, he announced he wanted to go somewhere fun for lunch.  I had planned on taking him home, but since I felt so bad about it, I decided to indulge him.  We had never been inside Chick-fil-A, and their play place looked fun, so I decided to take the kids there.

I unloaded them from the van, went inside, ordered the food, and lost my keys. 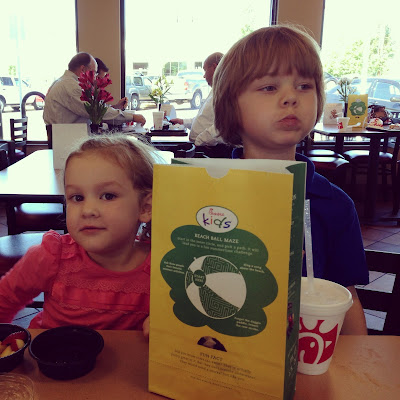 After looking all around the restaurant and parking lot, it dawned on me.  I must have locked them in the van.

With the diaper bag which had the nursing cover in it.

I tried to call and text Jeffrey, but he was very busy and couldn't take the call, or even read the text until he got off work.

I called my mom, hoping against hope she would be home and not working.

I was in luck.

She drove to our house, found my spare, and brought it to me.

I took Beth to the van and fed her, and she and I were both much happier and relieved.

After I got the family home, I found a spare second and hurried over to the store.  Guilt had been eating at me all day.

Explaining about the peanuts to the Guest Services lady was rather awkward, but I paid for the peanuts and left feeling so much lighter.  I am sure this is something I will laugh over quite a bit in the future.  I just know it.  Aw, who am I kidding.  I laugh about it now.

Today was not a good day for Keith. 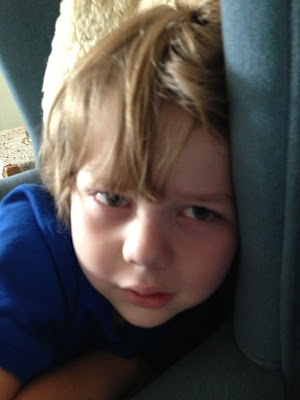 At school he decided to draw a picture for me when he was supposed to be doing something else and his teacher got after him a little.  He said he didn't get in trouble, but he was awfully upset about it.  Poor boy.  We talked about following instructions, staying on task, and then being able to do what he wanted.

We got home from school, had some lunch, and then I had to feed the baby.  When I finished with her, I went out to find the bigger kids.  Faye was playing in the family room, and Keith was sound asleep in his bed. 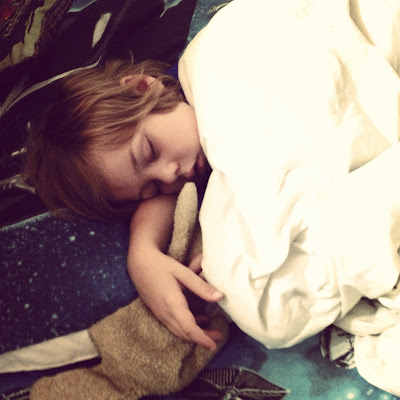 I couldn't believe it.  He really must have had a hard day at school!

Good thing tomorrow is an early out day, which means we will have lots of playing time to makeup for this really weird week!
Keith Motherhood

Confessions of a PTO Mom said…
My littles have snagged candy from the checkout isle more times than I can count. They know me at the service desk quite well.
September 6, 2013 at 1:42 PM

I've been in that peanut dilemma before!

You know, if you'd been in Florida or New York the cashier would have stared at you slack jawed for a second, then thanked you for your amazing honesty. Ah, the difference...
September 9, 2013 at 3:53 PM

Emmy said…
Oh girl that is a crazy day! So sorry about locking the key in the van, not fun at all. So glad your mom was able to come help you out.