Car Tetris and The Resulting Crash

And when I say finally, I really mean way too soon.

Beth, at the ripe old age of 1.5 months has outgrown her bassinet. 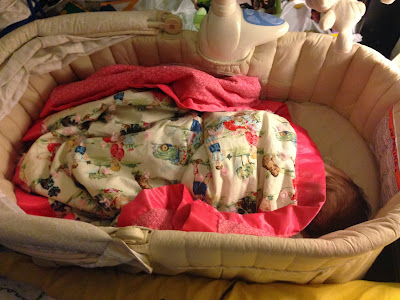 Do you see where her head is?  Her feet are touching the bottom.
Who does that so early?  This girl is amazingly huge!  I take her in for an appointment tomorrow and will find out exactly how huge she is.  But I digress.

Because of her incredible length, we were forced to move her from the bassinet into a crib.

Since the crib we used for the other two had been recalled, and broken during the move, we had to go find a new crib.  And so, the crazy events of the day unfolded.

Jeffrey wanted to change his oil.
I needed to have mine changed, and my car registered again.
We needed to get a bed for Beth.
I was meeting my mother at 5:00 for dinner before the General Relief Society meeting.

By the time the oil in Jeffrey's car was changed, which took a lot longer than we had expected, it was 3:30. So we set out, dropped the kids off with my mom to watch as my dad was getting the honey from his hives and would be of no help with the kids even though he was home.

I drove the van over to Jiffy Lube and Jeffrey followed me.  We told them what we needed done, and then went to the nearest store in search of a crib.  Which we found rather quickly.

Except we hadn't counted on it not fitting in the back of the car.

After much pushing and shoving and readjusting and playing the coolest game of tetris with the mattress and crib box, we finally got it to fit. 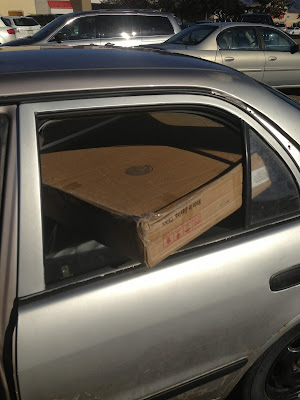 Except Jeffrey would have to walk over to Jiffy Lube to get the van.  I would drive there.  It was very near, so not a big deal.  But the most uncomfortable drive ever as the seat was pushed all the way to the front, and driving a manual car with no room for the legs would have done Hurcules in.  Sure, he could slay the Hydra or steal the apples of Hesperides, but I defy him to drive that car the block from the store to Jiffy Lube. His legs wouldn't have fit or been able to move.

So, I put on my hazard lights and set off, very slowly.  I was going about 10 mph beneath the speed limit and taking it very easy.  I got to the corner where the van was being worked on, and stopped as the light was red.

It wasn't bad, but it was infuriating.  To be hit twice in the same month, neither being my fault, but still happening has to be more than just bad luck.  Maybe that street is cursed as it was the same street I was hit on at the beginning of the month.  I don't know.

I pulled over, as did the other driver, and we got out.  She asked if I was okay, but as it was more of a bumper kiss than an actual hit, I was fine.  We inspected the cars, and surprisingly enough, there was no damage!  I say, if you have to be in an accident, that is the best kind to be in.  We stood outside of the cars and chit chatted until Jeffrey jogged up.  He had been only half a block away when it happened.  He looked, laughed and told the other driver to not worry about anything, as there was nothing to report, there being no damage or injury.  And we went on our ways.  I went to my parents house as I was dreadfully late for my meeting with my mom, and he waited for the van to be finished.

It turns out, my mom had to leave without me, and I didn't end up getting to go to the meeting with her at all as they didn't finish with the van until very late.  That was a bum deal.  But we have a crib for our giantess of a baby, and the cars have clean oil and everything.
Fun with Jeff and Amy

Emmy said…
Girl so so sorry you got hit again! Glad it did not cause any damage.
Were you able to listen to the session still?
September 30, 2013 at 3:56 PM

Susan Anderson said…
Happy to hear there was no damage. Hope you had the conference DVRd. It was a good one!