The Business of Being Busy

June 11, 2013
Summer is here!  We have been very busy with lots of playing.  You know how mothers are often heard talking about the many activities they do with their kids in hopes of wearing them out so they will sleep well at night?  Lately I have been doing just that.  With the small side effect of wearing me out as well.

Sacrifices must be made.

In our quest of being worn out this summer, we have had many adventures.

We went to one of my favorite parks for lunch with my sister in law.  While there, we were surprised to see 9 turtles sunning themselves on a log. 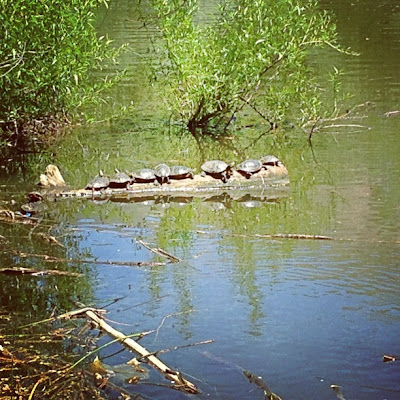 I have never seen turtles in that park before and it was quite a treat to see them.  So cute! 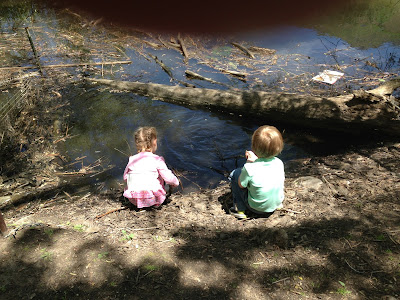 The kids had a lot of fun playing in the pond, throwing pebbles in hopes of tricking the fish into thinking it was food.

They didn't succeed with the fish.

Evidently ducks are not as bright as fish, as they began swarming the area where the kids were as soon as they saw the ripples in the water. 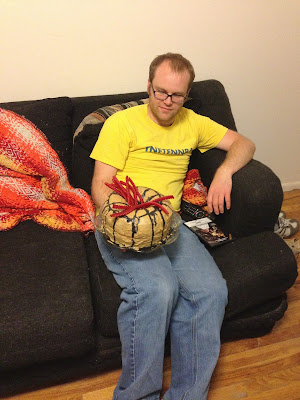 Jeffrey had a birthday and we celebrated it in true style.   As per his request, we went to the DI, and spent the day running around with the kids.

He had requested a barrel cake.  I ran out of time to make it though, and so tried to throw something together.

It didn't turn out very pretty, but it was delicious.

I learned how to make frosting out of brown sugar as I didn't have any brown food coloring.  I am a fan now. 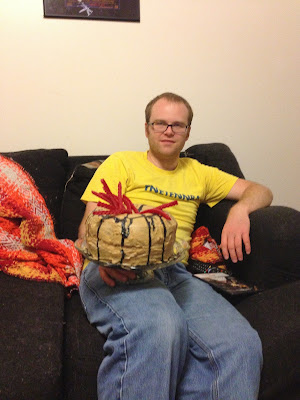 The licorice is supposed to resemble an explosion.

I don't see it either.  But it doesn't have to look pretty, right?  It only has to taste good.  Which it did.

For the evening, we went over to a friend's house and laughed and talked a good deal.  Also, we saw what is quite possibly the worst movie ever made.

George Lucas said, "If I had the time and a sledgehammer, I would track down every copy of that show and smash it."  Carrie Fisher said she shows it at parties, "mainly at the end of the night when I want people to leave."

It really is that bad.  We suggested showing it again because one of our friends missed it.  Immediately the other guests who had seen it threatened to leave.  It is really bad.  Which, of course, means I loved it.  Jeffrey did too.

The next day we went to my parent's house for dinner.  I didn't tell Jeffrey it was for his birthday because he doesn't like a big deal made out of things.  While the kids were playing in the backyard, the sprinklers turned on, and they enjoyed it to the fullest. 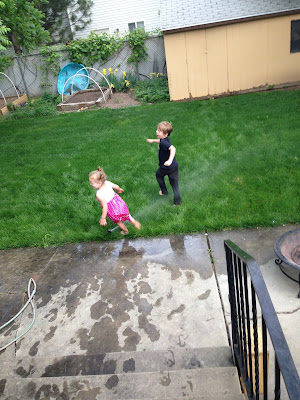 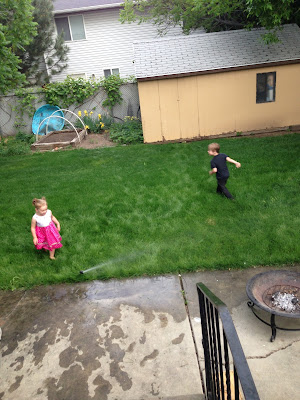 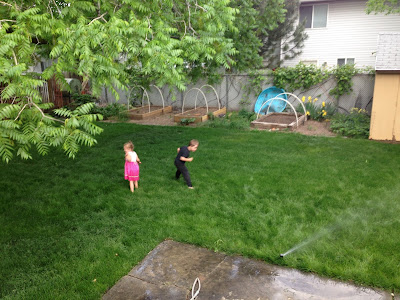 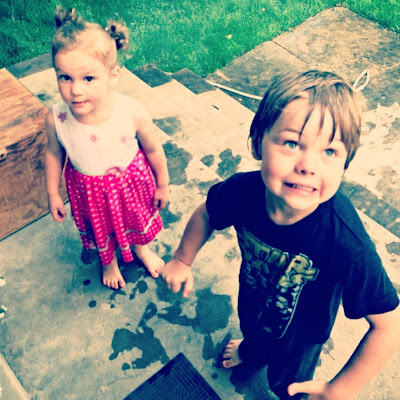 Some of my favorite memories are of running through the sprinklers.

Throughout all our runnings around, Keith was very keen to not neglect his creative outlet, much to my chagrin. 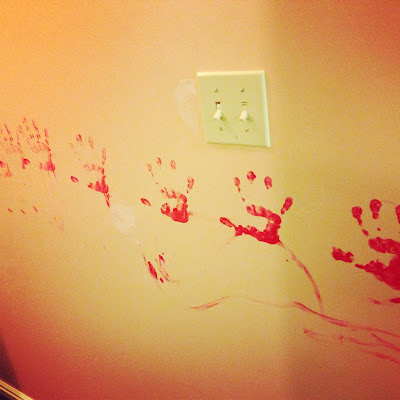 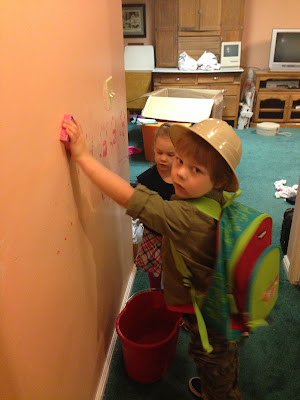 Of course he didn't enjoy cleaning it up, but I was relieved when I learned it was washable paint.

Typically, he decided to paint the walls right before we had to head out the door to go see my niece graduate in Idaho.

Happily, we made it in time. 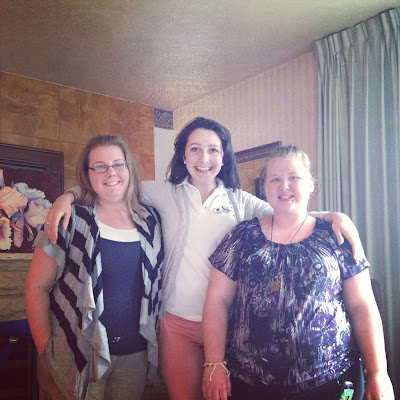 Aren't my nieces lovely?  The brunette in the middle, Genna, is the one who graduated.  And it was so lovely to see Amber again.  She is the one on the right.  She sort of disappeared and we hadn't seen her in nearly five years.  We all missed her terribly, and I am so happy she has decided to be around again. 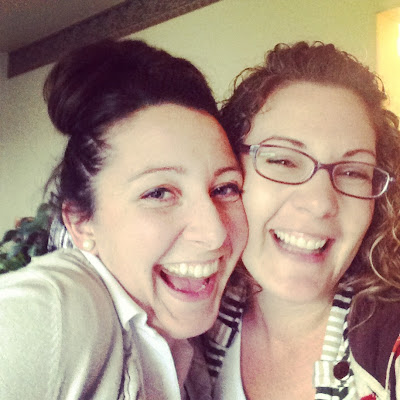 I always love seeing my nieces and nephews and am so glad they live so close.  It is a two hour drive, but compared to the rest of my siblings, that is very close.

Since Faye loves animals so much, Jeffrey and I took the kids to a petting zoo.  The goats are always my favorite.  They are the most friendly animals I have ever encountered, and they make me laugh.  So smart and funny.

There was one goat that followed me around and tried to eat anything that it could off of me.  My purse, my pants, my shoes, anything. 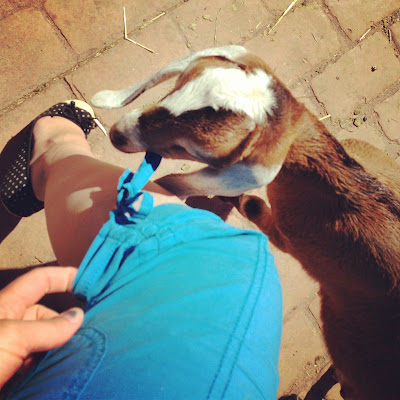 Right after I took this photo, I turned my back and the goat jumped up into standing position with its front legs on my back.  Silly goat!  It was a lot of fun.  Faye loved the chicks, Keith liked the emu but the show stealer by far was the goats.

We have been devouring watermelon by the pound.  And freezing a lot of it, too.  Sometimes we just can't eat it fast enough.  Faye loves coming to the store with me, and left me laughing as she was doing yoga in the checkout line. 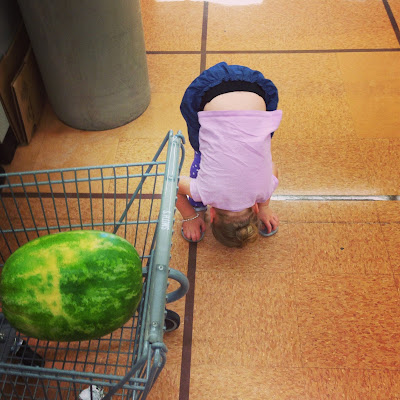 Tip: while listening to the news, I learned the best way to pick a watermelon.  My mom always taught me to thump it and if it sounded like leather, it was ready.  But I never wore leather shoes.  And thumping usually ended up hurting my fingers.  According to the news, though, the bigger the yellow spot on the melon, the more ripe it will be.  The reasoning is because it shows it was on the vine longer, the yellow spot is the spot that was on the ground and therefore didn't get any sunlight.

The watermelon in the cart by Faye was a hefty 18 pounder with the whole underside nearly completely yellow.

It was nearly too ripe to eat, but sure was happy we had chosen it.  Upon opening it up, we found a great happy smile.  It was a lovely sweet melon, and I am now a firm believer in the yellow spot theory.

Bedtime is getting later and later, but there is no helping that in the summer.  The other night, Jeffrey was a wonderful help with getting the kids to bed. 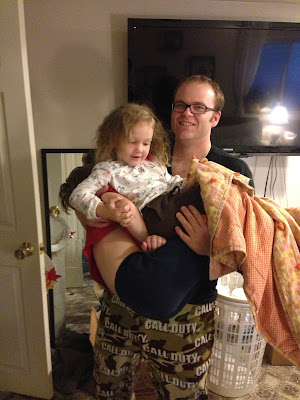 He was very efficient.  They loved it.

Summer, bring it on!

***As an update to my last post, my iron does not seem to have improved much.  I say this, because I am still desperately tired all the time.  Which is baffling as I have gone to extreme measures in order to fix this deficiency. 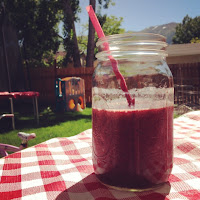 Cream of wheat for breakfast every day (which contains 50% of the daily recommended amount), green smoothies for lunch (spinach is loaded with iron, you know), grape nuts for a snack (90% of the daily recommended amount), and dinner cooked in my cast iron pan, usually with some kind of meat.  If you know me well, you know I don't like meat, so I am sacrificing a lot by cooking and eating it.  I am also taking my multivitamins and an iron supplement.

Since none of that seems to be working, I am resorting to eating more red meat.  I was cooking chicken.  The fact of the matter is I just don't like the flavor of beef.  And yes, I have heard it all.  "You just haven't had good beef.  You haven't had a good cut.  You haven't had it prepared properly..."  It is the flavor I don't like the most from beef.  And there is no changing that.  I am not looking forward to the next few days, but am anxious for Friday to come when I get my iron tested again.  Hopefully something I am doing will help to get those levels up before then!  It will be nice to not be such a vacant mother.  I sure have a lot of guilt over that.  I know it looks like we do a lot, but keep in mind, those pictures are from nearly two weeks spread out.  Some days I just don't get out of bed as I am too tired. Fingers are crossed for Friday.  If anyone has any good recipes on how to cook beef, I would love some pointers.  I haven't really cooked meat, especially beef in nearly 6 years.  I don't remember what to do with it.  Or any ideas on what to do to get my iron levels up.  Aside from eating liver.  That is where I draw the line.
Creating Memories Family Time Great Outdoors Health Jeffrey Motherhood Nutrition

Crystal Collier said…
My goodness, that cake was awesome!

And while you were talking about bad movie scenes, I was having flashbacks to Strange Brew. Whew! Memories!

Emmy said…
Oh I didn't know that about watermelons! Thanks!!