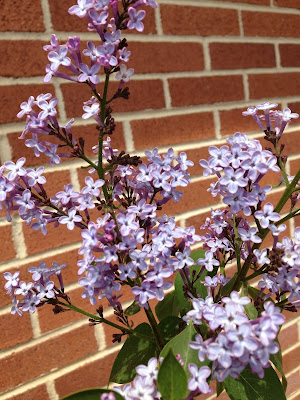 Thunder is rumbling and deliciously fat raindrops are pattering the patio, creating intricate lacy patterns of dark and light. I am listening to the comforting pitter patter and the deep throaty sounds of the storm through the open doors and windows in the kitchen as I sit here in the smells after dinner.  The dishes can wait.  Thunder and lightening are my favorites ever.  Especially when it comes in the summer.  Technically it isn't summer, but that doesn't matter.  I know the rain wont last very long and so I intend to enjoy it while I can.

The kids are playing happily around Jeffrey as he is doing his homework, and I have to smile.  I love this time of day.  Dinner time and just after is my favorite time of day.  It is the time when the whole family is together, and generally everyone is happy.  Right before bed and just after tummies are full.

I have begun to get back into cooking again, which makes me happy.  I have always loved creating things with food.  A while back, I was perusing some blogs and came across a recipe for Chicken Lo Mein.  Jeffrey saw the picture and begged for it.  I hate Chinese food, so very rarely do we eat it, restaurant or home made.  I was feeling generous today, and so made him the Lo Mein.
I have to say, I think it would have tasted a whole lot better sans the chicken.  But he really liked it.  Turns out, I think it is actually a Japanese dish.  We also had avocado egg rolls.
Oh my, heaven wrapped up in fried ecstasy   First off, the dip was a putrid green color, made with vinegar, cashews and cilantro.  All of which are on my "we are not friends" list.  For some reason, though, combined, they make the best wing-men in all of food-dom.  And then avocado egg rolls.  Need I say more?!  Jeffrey and I were terribly happy with dinner, though the kids were less than enthused.  Keith pretended he was Calvin from Calvin and Hobbs, and that his food was gagging and attacking him.  Faye just jumped on her chair until she used the potty excuse and never came back.  But that was fine, because it meant I got to eat their egg rolls, and Jeffrey got their noodles.

While I was cooking dinner, Keith and Faye were pretending to be wizards.  They put on their robes, and Keith put on some pajama pants and church shoes (because wizards have shiny black shoes), and they walked around the house hiding coins and pretending they had disappeared.  Occasionally they would wander into the kitchen while I was cooking dinner and try a "trick" out on me.  Faye decided she was hungry, and so sat down on the counter, took a chicken drumstick and proceeded to devour it, medieval style. 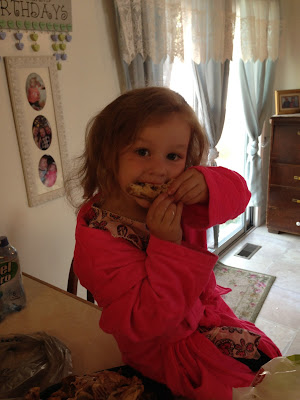 She told everyone she was a lizard.  Keith would smack his hand to his head and groan good naturedly and say "Faa-aayyye, it isn't lizard, it is Wizard!"  He did that about "eleventy billion times."  I love that he didn't lose his temper or get upset with her for saying the wrong word.  He is such a patient and kind older brother.


While Faye was napping this afternoon, Keith and I decided to plant some basil and chives.  I had gotten some of the living plants from the grocery store, and we are keeping our fingers crossed that they will actually live.  Especially with how often I use fresh basil.  Or want to, anyway.  While out there, I re-encountered my old nemesis. Doctor Greensward, aka Grass.  I always forget I am allergic to it until I am knee deep and enjoying myself, and then the rash breaks out, or the hives.  And the itching and sneezing and the itchy eyes, oh heavens!  It sure isn't fair that I have such horrendous allergies, because I love the outdoors so much.  I braved the grass anyway while we planted.  Keith was so enthusiastic and helpful in the planting of the plants.  I am excited for the time we get to have a garden of our own to take care of.  I am so excited for the blossoming of the trees, the lilac bush, and all the flowers. 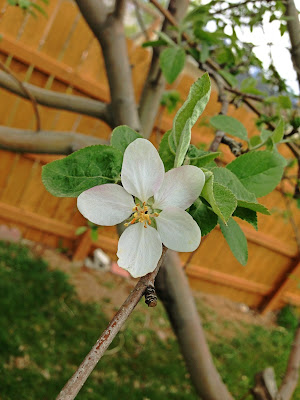 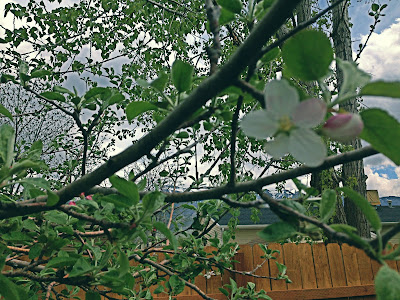 I am not excited for the hay fever and allergies that accompany them.

If I could have a do over of today, I would with my whole heart.  But not because it was a bad day and needs a do over.  Because it was a great day, and I would love to live it and relive it as many times over as possible.  Going to bed after such a wondrous day practically guarantees sweet dreams, right?
Motherhood Nature Romance

Susan Anderson said…
Did I tell you about my grandson? His mom has all but cured him of his allergies by having him take a tablespoon a day of locally grown honey. It is giving him immunity!