There has been a lot of talk about dreams in our house, lately.

The kids share a room.  They are getting good at coming up with excuses to get out of bed or stay up late.

Sunday night they had been tucked in to bed and two hours later Faye came into my room, rubbing her eyes, telling me she had a bad dream.  She had to fight a dragon.  I asked her if she won, and she looked at me like I was crazy.  "It was just a dream, Mom." she said.

The door opened again, and there stood Keith, lip quivering, his huge almond eyes squinting at me with trepidation.  He didn't know how he would be received.  Would I send him to bed immediately, or cuddle with him, too.  Faye was still getting her "bad dream cuddles" in.

Evidently he had a bad dream as well.  He was also fighting a dragon in his dream.  His dragon had a thousand heads.

I began to suspect they had not been sleeping, instead had been talking and had scared themselves.  How strange that they would have the same bad dream at the same time, right?

Since this was turning into a habit, the "bad dreams," something had to be done.  It was the fourth night in a row.

I took them both back to their rooms and tucked them in.

I gave Faye my stuffed elephant that I have had since I was three and told her that he would always protect her.  He hadn't ever let anything bad happen to me, and he would do the same for her.

I gave Keith a stuffed tiger and we talked about how most animals are afraid of tigers, and the tiger would protect him.

I pointed out the dream catcher on the wall.

It is not the typical dream catcher that you think of.  Last summer I got to be in an art therapy group and it was one of the assignments that we needed to create.  Everything about it is symbolic about something important to me.  It is round, of course, which symbolizes eternity.  Because a circle has no beginning or end.  In the center is ribbon which says Happily Ever After.  Because this is my happily ever after.  Hanging from that ribbon is a key which symbolizes the Priesthood. The power of the Priesthood is what makes us an eternal family.  The Priesthood can protect us and help keep us from harm.  Woven throughout the Happily Ever After ribbon and around the circle is a chain of flowers.  They were just pretty.  They didn't have a real purpose, but I am sure I could BS one if I needed to.  Hanging at the bottom of the circle are some mint green ribbons and lavender ribbons.  They matched the flower chain.  Also, I tell the kids that the good dreams trickle down those ribbons and into their heads.  Dangling in the midst of those ribbons are two charms.  One is a pink flower and one is a blue flower.  Representing each of my babies, of course.  That dream catcher is made strong with our love as a family.  The more love we show each other, the stronger it will be.  It can keep out the bad things if we make it super strong.  It is already strong because we have an awful lot of love in our family.  I explained that it catches and keeps away most bad dreams, and they could sleep knowing they are safe and loved.  They both went to sleep with smiles on their faces.  It made me so happy to see them smiling in their sleep.

Last night I had some bad dreams.  On top of getting two hours of sleep total.  It was a rough night.  This morning, though, when I was telling Jeffrey about the three disturbing dreams I had, Faye overheard and ran out of the room.  I thought it was because of my yucky dreams.  I thought maybe they had scared her.  Seconds later she was back with the dream catcher.  "This will help you have sweet dreams, Mommy!" she said.

It was a rough day today.  Two hours of sleep which were crappy does not make for a very happy or nice mommy.  Poor Keith got the brunt of it as he insists on having power struggles with me.  I always win when I don't get enough sleep.  I yelled at him.  I think I have only done that four times in his life.  He ran from the room crying and I felt like dirt.

We had a very hard morning.

This afternoon, however, some very good things happened.

Well, one, but it was so good, it made all the bad pale by comparison.

I was driving home after learning the AC unit in our rental house had gone out and was going to cost a couple hundred to fix.  Happily, my cousin is the repair man, so I know we are in good hands.  But spending money on things we haven't budgeted for is never a fun thing.

As I was driving, I got a phone call.

"Hi, Amy.  I am calling from the charter school.  We had a couple of spots open up and are accepting Keith for this fall."

It was the voice of an angel.

I had to pull over as tears had srpung to my eyes as she explained everything to me.

I have been so full of gratitude and joy over this new development.

We really wanted our kids to go to this school.  It is an Expeditionary Learning school, which is a lot more hands on, critical thinking, and creative thinking kind of school.  We had enrolled Keith into kindergarten at the local public school last week, thinking we had no other options.  I worry that Keith learns like Jeffrey, which means he is brilliant and never forgets anything he learns, but goes about it in a different way than most students, thus frustrating teachers and making things harder for him.  This way of learning is right up his alley and perfect for him, and I believe it will give him better educational opportunities and help him so much more than a public school which is more of a "one size fits all" approach.  Also, my sister's kids all went to an EL school, and they are some of the brightest and most well adjusted kids I have ever met.

The rest of the day was spent gathering all the information I needed because tonight was the kindergarten round up/registration.  I called the public school to un-register Keith and get back all the paperwork I gave them, which was awesome because it saved me a few trips to other places.  As soon as Jeffrey got home from work we dropped Faye off with my parents and went to his kindergarten meeting.

Keith was not so sure he wanted to go to the charter school since learning several of his friends would be going to the public school with him.  But he was a good sport.  He decided to get dressed up like the Doctor, and even asked for his hair to be combed! 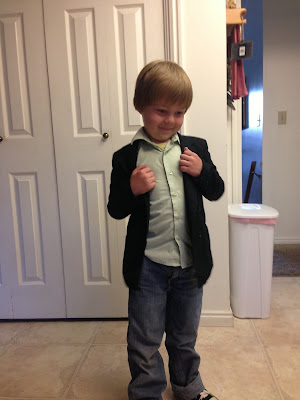 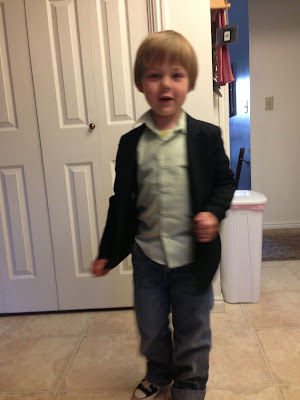 I was shocked and pleased.  He looked awfully handsome.  He met the kindergarten teachers, did an activity with them, and is now convinced that he will love the school.  Especially because their mascot is a Viking.  And he gets to wear a uniform.

Jeffrey and I have had our hearts set on our kids going to this type of charter school for so long, it was devastating in February to learn he hadn't made it in the lotto.  Wait listing can be so hard.  Today, dreams came true.

Keith's acceptance was the epitome of a tender mercy for me.  It was the little nudge and reminder that I needed.  I am so happy and grateful for the blessing of him being accepted.  I know that all things happen for a reason, and I know that prayers are answered.  This was an answer to a prayer we had been praying for more than a year.  It is going to take a lot of sacrifice on our part.  The school is 20 minutes away and there are no buses, but we are so happy to make the sacrifice of getting up that much earlier and making the drive every day.  Education is important.  And when the Lord blesses us, we have to do our part, too.

You have such a lovely heart!

Licy was at a charter school this year and we've loved it but we're moving her next year because she got accepted in a Spanish dual immersion program and it's too great of an opportunity to pass up.

Yay!!! I feel your joy, I love it when things fall into place like that. I hope Keith has a wonderful Kindy year at the charter school. And you, you need a nap. I couldn't live off 2 hours even if I were 19 again. Sweet dreams!

I also love that you have a sport coat for your son. You've (again) given me something to aspire to.

Wonderful news! Hope the school is everything you want it to be and more!!

Oh yea!! So so happy for you! So glad he got in and I am sure he will do so well at that school.

And girl 4 times total? And after only 2 hours of sleep?? You are a saint. I am afraid I have lost count of how many times I have yelled at my kids :(

How awesome! I'm super excited for Keith, and for you. Truly, what a blessing. =)

no sleep makes me a super grumpy mommy... My kids have even told me i need a time out and a rest and I can come back out once I have calmed down and can act like a normal mom again... I hate it when they throw my logic back on me... We prayed alot about if we wanted to do charter school or not (or home school)... We both got an answer that for right now public school is where Sammy belongs... I worry that she is not going to be challenged enough she is reading and doing 2nd grade math... I worry that she will get board but That just means I need to fill in the blanks at home... At least for now that is the path that we fill is right for us... I'm super excited for you and Keith to have your prayers Answered... And my kids play the bad dream game too... Little monsters =) Lately it the staying up for 2+ hours talking and giggling in there bed that is driving me crazy I guess it could be worse they could be screaming at each other lol =)