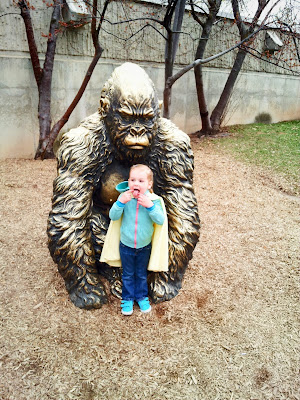 Friday was a day filled with deep life lessons.  And a bit of chaos.  I had a doctor's appointment at the last minute.  Seriously, last minute.  As in I woke up, talked to the doctor's office, and learned my appointment was half an hour later.

That meant some seriously fast showering and getting ready for the day, but when I left, I was satisfied that I looked cute and fit to be seen in public.

When I got home, Jeffrey and I decided to take the kids to the zoo.

It was a cloudy and cold drizzly day.  The rain came off and on, forcing us to be prepared for anything.  I decided to abandon fashion and wear my comfortable but ugly nurse shoes.  We would be doing a lot of walking.  I also decided that the super cute skirt I had been wearing would be too cold, so put on some grubby pants, a turtle neck, a stripped jacket, and to complete the whole ensemble, an old holey Harvard shirt that I had found at a thrift store on my mission.  With raised eyebrows I looked over my reflection in the bedroom mirror and laughed at how absurd I looked.  While pulling on the turtleneck, my hair had gotten all frizzy and I looked like a bag lady.  But we were going to the zoo, it was cold, and no one would be there.  My kids didn't care that I looked like I had just awakened from a good sleep in the dumpster, and Jeffrey, as usual, was more concerned that I be comfortable and warm than win any fashion show.  I love that about him.  He is so practical.

We left for the zoo, and had a fun half hour there. 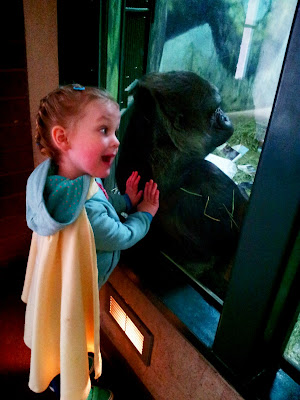 The elephants made me grin, as they always do.  For some reason, I can spend forever watching the elephants.  They have always fascinated me, with their slow and deliberate lifestyle.  And yet they are the most family oriented of all the other mammals.  They even "babysit" each other's babies and elderly, when in the wild.  Amazing! 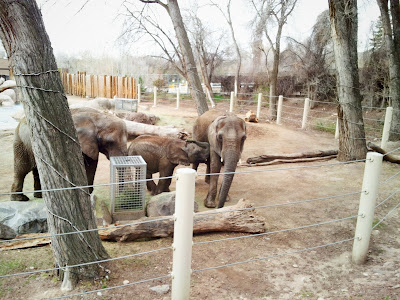 From the elephants we moved on to the carousel.  Obviously, the kids favorite part of going to the zoo. 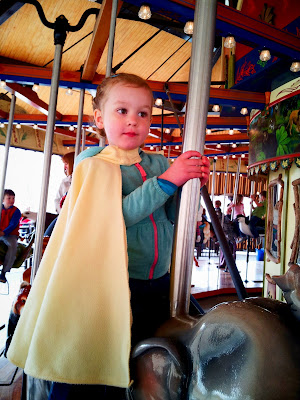 While I was standing next to Faye, who was squealing with delight and bouncing dangerously on her animal, I watched the people sitting on the benches whir by.  Each time we made a revolution past Daddy, I would point him out, and she would wave frantically.  Keith, a few animals back sat coolly, unaffected by the exhilaration his sister was feeling.  His face was very bored, even when I pointed out his dad. 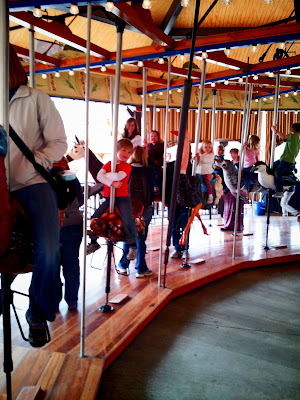 Around we went, passing Daddy, and then I saw a face I never thought I would see again.  A face I secretly hoped I would never see again.  It was a face from my past.  Someone who had helped shape me into the person I am today.  I didn't want to see that person again, not because there was bad blood between us, because there is not, but because it was a chapter that was closed in my life, and seeing them brought back too many memories.  I didn't know what to do.  When the carousel stopped, I took the hands of my children, and rushed to Jeffrey, who had not only seen my emotion conflicted face, but had also seen the cause.  He understood my anxiety.  I didn't know what to do.  I didn't want to talk to my long past friend because I looked like a cat lady.  I was embarrassed.  I wasn't supposed to see anyone of importance at the zoo!  I didn't want to walk on by and be rude, so I pretended (and believe I made it very believable) that I didn't see them, and was engrossed with my kids.  Besides, I felt more beautiful when I had my children's hands clutched in mine.  Regardless of what kind of dumpster I seemed to crawl out of, I am a mother, and mothers are always beautiful.  That was my only consolation, and so I held those little ones close, silently pleading for my friend to not notice me and to notice my children instead.

The rest of the time we were there I was worried about a reoccurrence.  I was ambushed by emotions that I didn't want to sort through.  I felt the frumpiest I had felt in a long time and was embarrassed and ashamed that I would even care.  I was sad that I hadn't talked to my friend, and wondered if I had hurt any feelings, or if I had even been noticed.  Jeffrey realized how uncomfortable I was and so he told the kids it was a very short trip to the zoo, and we left.

As soon as we got to the car, the barrage of emotions became too much for me and I began to cry.  The kids asked why I was crying, and I had to laugh and admit I didn't know.

But that is the day I learned a valuable lesson.

Fashion over function, every time.  You never know who you will run in to!
All About Me Learning My Mistakes

I HATE when that happens!

I hope you're finding hope regarding the important life lessons. Gosh. Being an adult can be so exhausting sometimes!
April 22, 2013 at 10:17 AM

Crystal Collier said…
I had that happen when I was 4 months pregnant. Ran into an old boyfriend who was still single and pre-mission, and he obviously wanted to talk to me. I hadn't done my hair, and was wearing a ratty sweater, and I just felt grubby. I was only out because my sister begged me to go shopping with her and Mom before she took off for college. On top of that, I was married, and didn't he know how inappropriate talking to me would be? Sheesh. Talk about awkward. :P

Confessions of a PTO Mom said…
I understand your emotion 100%. It happens to me more often than I want to admit here in my little town.
Simply say a thank you to them, for all they gave you, Good and bad. Someday I hope you get the chance and strength to say it in person. And me, too.
April 23, 2013 at 1:04 PM

Susan Anderson said…
Isn't that the way it goes? When I first met my husband's high school girlfriend, I had a very unusual breakout of acne and a guy had just fried my hair trying to put highlights in it. I looked the worst I had ever looked in my life!