April 17, 2013
Since we got the Bosch, I have been meaning to bake bread.  Lots of it.  I just hate getting started because the wheat grinder is so loud.  Excuses and stalling are sometimes my closest companions.  I finally got around to it today.  I decided to try my sister's whole wheat bread recipe. 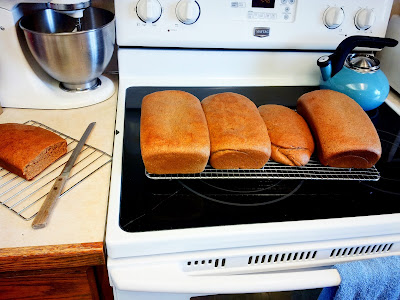 I think I found my go to recipe for bread.  I know I have said that before, but this one is seriously just six ingredients and takes very little actual labor.  And it is heaven in the mouth!  Jeffrey, who is the bread critic around here, had a slice and with a big crumbly bread and butter smiles said he approves.

I had tried to change a roll recipe into a bread recipe on Sunday, and it was yummy, but got old fast.  Not the bread, but the flavor. 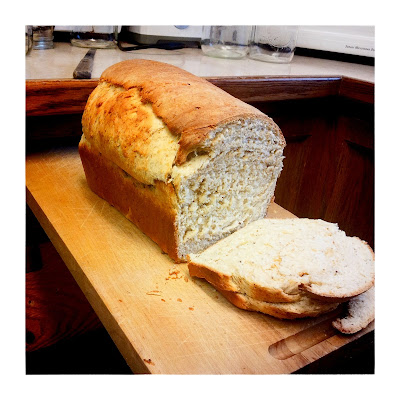 That recipe works much better as rolls.

Seriously, though, whole wheat?  100%?  We are very happy with the results of my newest recipe and plan to make it once a week.  It makes 5 loaves, so it should last about a week.  Especially at the rate bread is consumed around these parts.  My husband and son are bread-aholics.

I have also decided to be a lazy chef this summer.  I have begun to make freezer meals. Begun meaning today was the first time I did it, but you have to begin somewhere. I have a hard time cooking dinners for less than an army which usually results in leftovers for a while. This is what happens when you grow up in a family of 9.  It is like an army (lots of sibling battles), and it requires big meals. I decided today to just make my army sized meals, and then freeze half of it.  This way we are twice blessed with the yumminess of it, we don't get tired of it, and I get to be lazy on the hot summer days when I just don't feel like cooking.  Why on earth did I not think of this before?!

I had a realization today.  Keith has been incredibly good.  He hasn't had any tantrums lately.  I mean he bit his sister a few times the past few days, but they were mostly provoked.  And I am not excusing them, but it isn't like it was out of the blue.  He has not slammed any doors, yelled, or any of the other antics.  Thinking back, I traced it to the day he got his lamp.  He has been as near angelic as a 5 year old boy can be since that day.  Interesting, no?  We think it is because he needs to feel like he has some sort of control in his life, and with the lamp, we are showing him trust, and he is more in charge of his bedtime.  He goes to bed when we ask him, and then he turns on his lamp and reads until he falls asleep. 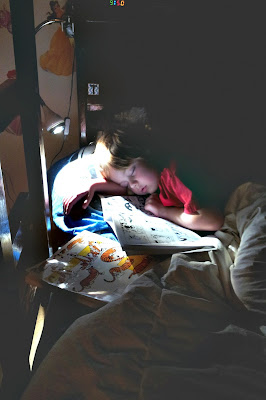 I am not overly fond of his night owl-ness, but can't say that I really can blame him.  I did the exact same thing when I was a kid.  Except I didn't have a lamp, so I would open my door a crack, lay on the floor in the light of the cracked door and read until I fell asleep.  But it is brilliant that we haven't had any problems with him.  I am so proud of him.  When he wants to be a good boy, he is darn near perfect.  He does his chores and what we ask him with little grumbling, and most of the time is very happy to help.  I can't even explain the contrasting difference between him now and him a month ago.

Now we just need to figure out what to do about Faye and the unprovoked hitting of her brother.  Sigh.  With Keith, when he gets into trouble we can take away electronics and legos.  With Faye, there isn't anything that she plays with every day, so it wouldn't make much of a difference with her if we did take something away.  Yet because of that, Keith feels like we are unfair and harder on him. He told me this tonight. He gets things taken away and she doesn't, which in his eyes, and the eyes of logic, is not fair  But she wouldn't care if we took anything away, she would just find something else to play with.  And so the dilemma continues.  If it isn't one child, it is the other.  When she gets into trouble, she always wants a hug, and I know that touch is her love language, but I don't feel it is right to withhold hugs when she asks for them.  I don't ever want my children to feel like my love is conditional  Tonight I gave her the hug she wanted and then sent her to the quiet corner.  I am happy I re-named it.  We used to call it the naughty corner (until tonight, actually) and she would continue to act naughty there.  Screaming, crying, hitting the walls and doors around her, etc.  When I called it the quiet corner, completely on accident, she went there and sat quietly until I told her she could come out.  Ah, the power of names.  I know that we will figure out what Faye needs eventually, just as we did with Keith.  It is the trial and error that is not fun.

I tell you what, though.  The in between times (which equal out to be far more than the actual tantrums) are so much fun!  Faye has taken to following me around and helping me with the household chores. 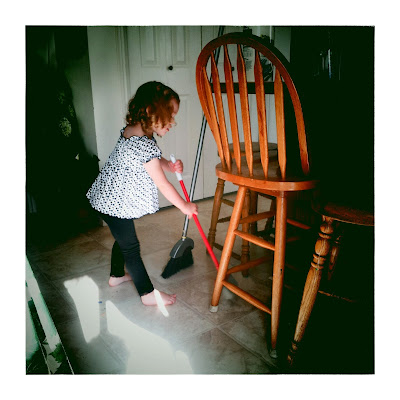 I love the company, and her hilarity while I am working.  I also love that she is loving helping me and learning those vital skills for life.  She is such a good girl, too. 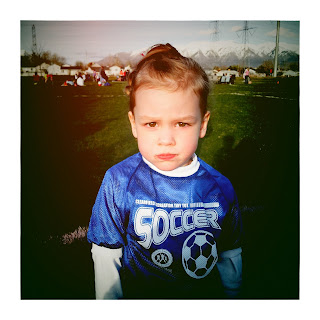 Gosh, I love these kids and this time I have to be their mother.  What period of life could be better?!  All the learning and growing we all do is wonderful and amazing and life changing all rolled into a big buttery ball of sweetness and love.

Emmy said…
So good you documented this as when there are those days that you just don't know what to do you can read and remember that things do change and there are and will be times of good.
I like the quiet corner name as yes it helps them know what they need to be at that time.
April 18, 2013 at 11:23 AM

Heather said…
My mom just gave me her old wheat grinder. You'll have to pass on the recipe. Fresh baked bread/rolls is one of the homemade things I can actually get Rowan to eat!
April 18, 2013 at 9:52 PM

We just called our little chair in the corner the "time-out chair." Nothing new, but it did the trick!