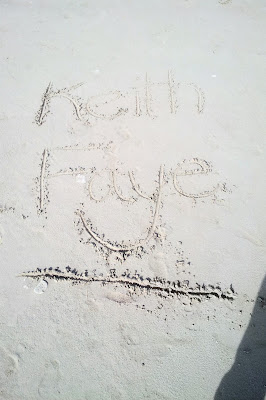 I hate to say it but there it is.

I first noticed it when the kids and I went for a walk this afternoon.  We had been out weeding the flower bed, cleaning it out (I should have done it in the fall, but I have no excuses.  I was lazy and paying for that laziness now), getting it ready for planting soon.  Because this weather rocks!  67* today!  The kids were getting bored and were not allowed in the house because Jeffrey had taken the day off of work so he could take a test for school.  He needed quiet.  So we went for a walk.  As we were coming in on the home stretch, Keith said "I'll race you home!" and took off running.  Like a girl.  His hips wiggled, arms swayed,  and it was almost like he was speed walking instead of running.  His little feet were barely leaving the pavement, and I couldn't help but laugh and make a mental note that he needs to  be taught how to run.

Jeffrey would be the perfect teacher because, well, I run like a girl too.  Maybe its hereditary.  Jeffrey, though was on the track team when he was in Jr. High.  But don't ask his parents, because they didn't know. In their defense, they both worked and he is an extremely quiet and reserved sort of person.  He doesn't share things unless he believes you need to know.  We were having Sunday dinner with his family a while back and his sister mentioned the fact that he was on the track team at one point.  Both of his parents were shocked and denied it.  Jeffrey smiled and affirmed that indeed he was on the track team.  Everyone laughed at how successful he was at being so private.  But the point of that whole story is that he was on the track team and loves to run, so would be the perfect teacher for Keith.  Mentally filed away for future reference.

When Jeffrey finished his test we plopped the kids down in the van and headed out for an adventure.  Because the sun was shining, and we wanted to take advantage of the great weather and Jeffrey's day off.  We decided to drive out to the island in the Great Salt Lake.  On our way we stopped for some food.  Fast food that was really slow.  It took them 45 minutes to get our order, and they messed it up three times.  But we don't complain.  We got to sit and talk with the kids.  Anticipation was building for the little ones.  Besides, the workers were really nice and honestly, they gave us so much free food that I am sure they ended up losing money on us because of the mix ups.  And they offered to give us a free meal the next time we go by.  Fast food workers.  Gotta give them a break because it is a job no one wants to do, right?

The Island was beautiful.  As always. 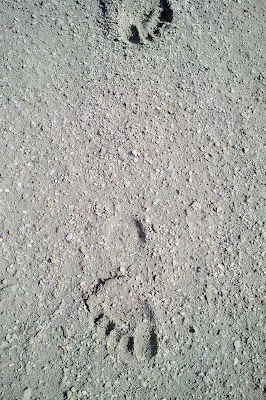 We played in the lake for a good while, both Keith and Faye fell in. 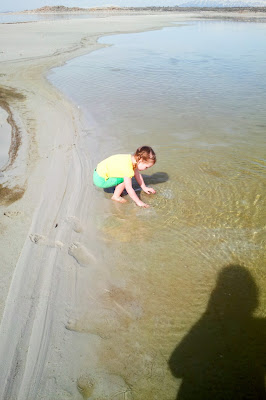 The squelching of the mud between our toes made the kids giggle. 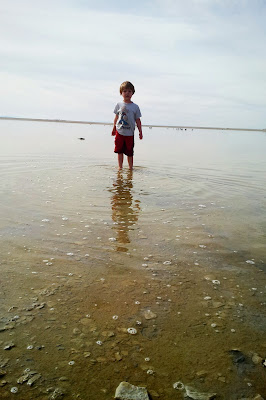 The water was warm, and the scent made me happy.  I know most people hate the smell of the Salt Lake, but I love it.  The salty sulphery smell takes me back to my childhood, playing in the wind just before a huge storm.  The sound of the gulls and the gentle lapping of the water helped secure the memory in my mind.  While we walked through the shallow water, Keith told us it was called the Mystic Sea. 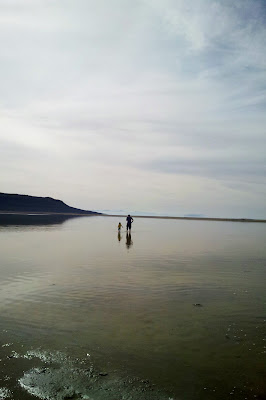 He told us that the rocks poking out of the water were messages to help protect us from the Mystics who were hiding beneath the water, waiting for us to make a mistake so they could suck us down to their lair and use our brains for their stew.  That boy and his imagination! 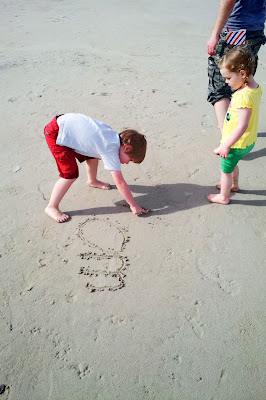 On our way off the beach, my mental note came forward as I saw Keith running across the sand.  I pointed it out to Jeffrey, and he immediately took charge.  Keith had his first running lesson.  Already he is improving.  Can't wait for soccer to start up again!  He might actually keep the ball.  Keith is good at stealing the ball, but not very fast.

It was a lovely afternoon and they loved it, but sadly we weren't there for long.

After the beach we went to the ranch and got there just as they were closing up all the buildings. 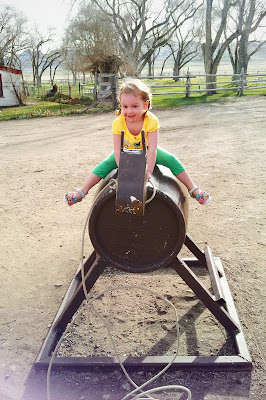 The kids played on the equipment and then it was time to go. 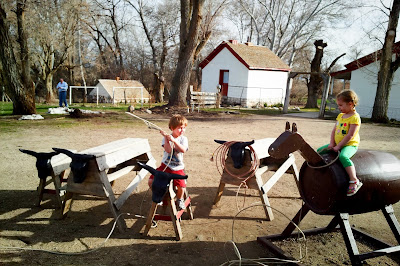 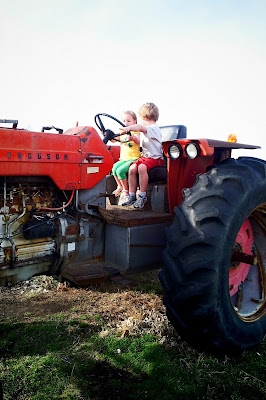 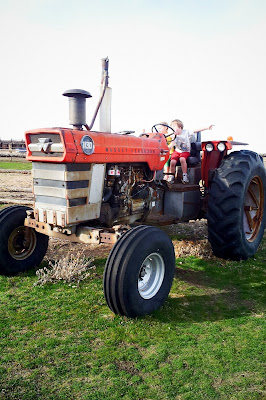 We were completely exhausted just a few hours after we got there, so we decided to take the kids back home.  And half the beach, apparently.  We are planning on going back soon, to spend the whole day. 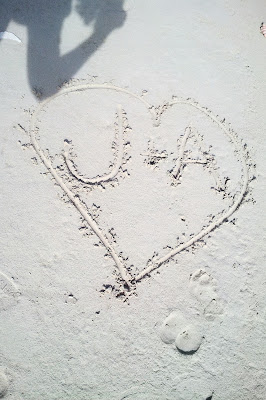 Susan Anderson said…
Neat post about a neat day, but I can't stop thinking about the amazing fact that you love that sulphur smell. I can't even imagine!!

Jenny said…
What a beautiful outing!