I have a confession.

I sleep with my makeup on.

I always have.  I know it isn't good for my skin, but by the time I am ready for bed, I am so tired, I usually forget to wash my makeup off.  When I was in High School I would be so busy with my social things and homework, I would often times fall asleep fully clothed, too, which is probably where the habit started.  Also, my face always seemed to feel super dried out after I washed it.  I mean, I would always shower in the mornings, but I hated the tight dry skin at night. Sounds really gross now that I have written it down here, but the truth isn't always pretty.

Around the time I was 22 I developed an awful rash around my mouth and nose.  I can't remember what it is called but it looks like pimples, but they are actually small blisters and hurt like crazy.  Especially if I try to pop one.  Ow!  I have tried several different medicines for it, some steroids and some antibiotics.  None have worked.  I was even allergic to some, which was not very fun.  I have tried topical ointments.  I have tried some that have to be ingested, and guess what.  None have worked.

So when I read up about an oil cleanse, I was intrigued.  It goes along the lines of like dissolves like.  Which means oil dissolves oil.  Which theoretically would mean that washing my face with oil could possibly help, right?  Especially since some oils have antiseptic properties to them, right?

I decided to try it.

Guess what, it washes all my makeup off, my face doesn't feel dried out, and I actually feel pretty because my face feels supple and healthy.  Which is sort of the opposite of how it felt when I would wash my face with cleanser (or even just a washcloth and water).

I have been doing this for three days.

My face is clearing up.  It isn't completely gone, but it is not as noticeable.

I have high hopes for this to help take away completely this awful rash.  I was told the rash is bacteria caused, and maybe this will help to completely get rid of it.

Now, I know that some out there may say that I would have the same results if I had washed my face every night consistently.  This may be true.  But I did wash it every right before I got married and right before my engagement pictures.  My face was very red, and chapped, and felt awful.  The rash was slightly less, but in three days time it has improved more than two weeks of washing it morning and night like I did before the engagement pictures and my wedding day.  So, for me, I am going to say that I am convinced.  I like doing it, I like how it feels, and I like how I look.  Healthy skin rocks!

Speaking of skin, I have really dry skin.  So dry, that in the winter I generally get cracked and bleeding knuckles.  Which leads to a problem I have.  I am lazy when it comes to lotion application.  I use it when I can't stand the dryness anymore.  And that feeling is like fingernails on a chalkboard.  I just can't handle it.  It is like the air is sandpaper against my skin.  So not fair.

Again, did I mention how lazy I am when it comes to lotion application?

And then when it is winter, I get so dry and itchy that I can't sleep at night because it is so itchy it hurts.  Darn dry skin.

And then, I remembered something I had done last year to help with the dryness.  Can't believe it took me this long to remember.

My little sister gave me the recipe last year and it is glorious!

I got a mason jar and filled it with Kosher salt.  I used kosher because the crystals are a lot bigger and coarser.  I then got some extra virgin olive oil and mixed the two of them together until the salt was moist enough.  I just guessed on it.  I also added some vitamin E oil.  I was supposed to add jojoba oil, but can't seem to find any locally.  After all the oil and salt was mixed together, I added a few drops of essential lavender oil, mixed it together, and it was ready.  I keep it in my shower and use it for my shower scrub now.  The salt works as both a disinfectant and exfoliant.  The oils help my skin be healthy, and it is not longer dry and scratchy and flaky.  I can sleep at night with no problem from my skin now.  I am sort of in love with this.  As odd as it might sound, I now seems to have a slight glow even.  Which is amazing because it is the middle of the winter, and I make snow jealous of my whiteness.  Heck, even in the summer I generally don't glow so this is rather wonderful.  Again, healthy skin makes me happy!

Another thing that makes me happy is completeing a project I started a year ago.

I wanted to make a wreath, and I saw one that I thought was genius.  It looked like grass, and had flowers all over it, and I was sort of in love with it.  So I bought the grassy yarn, and went to town.  And it took far longer to wrap that yarn than I had anticipated.  And a lot more yarn.  Mainly because I made it really tight to get the look I was going for.

Today I finished it, and I am sort of in love with it.  I am so glad that I started this so that I didn't forget about it shortly after seeing it.  This is a wreath I want to have for years to come. 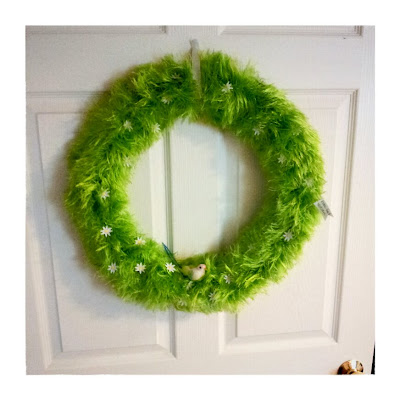 Before the flowers or bird or sign were on it and when it was just the "grass," Jeffrey called it the Dr. Seuss wreath.  Silly boy. 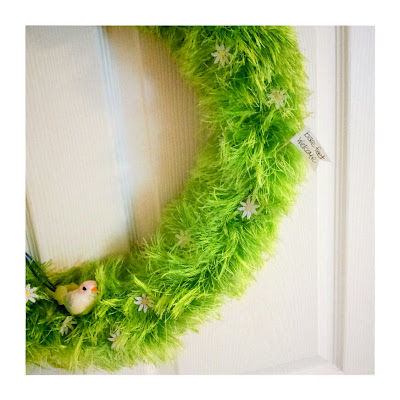 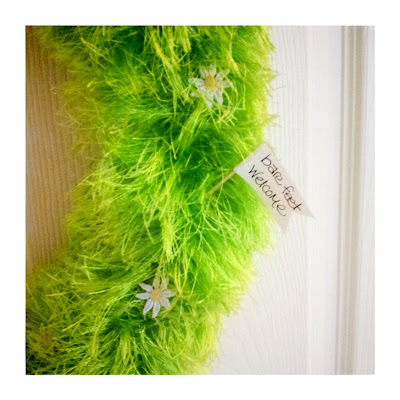 I know the sign needs to be bigger, but I just wanted to finish it right then.  I will fix that later.  Even with the tiny sign, I love it.  There is nothing like completing a project, and loving it when you finish.  Much better than finishing a project that turns out to be a disappointment. 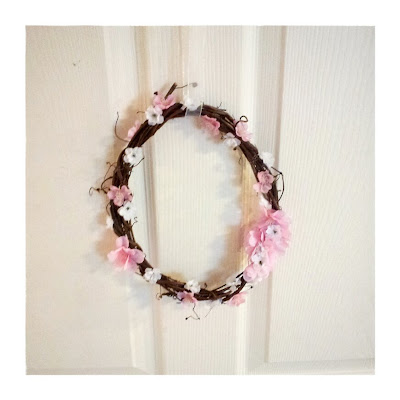 Before I finished the Dr. Seuss wreath, I made this one for the kid's room.  Faye loves it and wore it around as a crown until I hung it on her door.  She also had a lot of fun helping me make it.  This is officially the first wreath I have ever made.  Er, completed.  It is sufficient for the kids for now.  It was a great starter, and I am learning.  Gotta say, it isn't my favorite, but I am still proud of it. 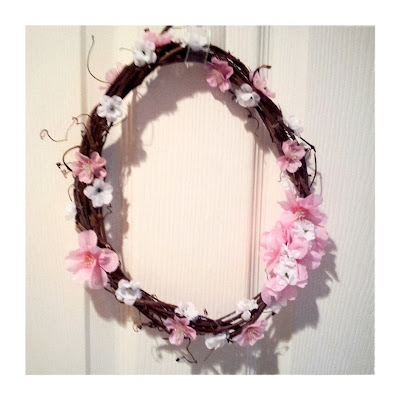 And evidently the creative bug bit me today, because when I finished with the wreaths, I decided to make Faye a bear because she lost hers on Christmas.  She had gotten it on Christmas Eve.  It was sad.  So, I made this for her today. 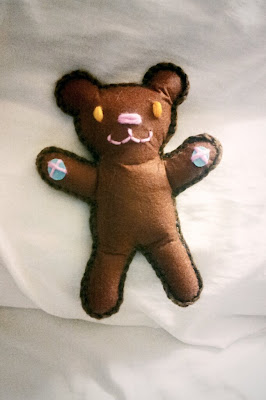 It isn't anything fancy.  Just felt and yarn.  But she loves it.  She did tell me I forgot the eyelashes, but she has been carrying it around all night and is rather in love with it. 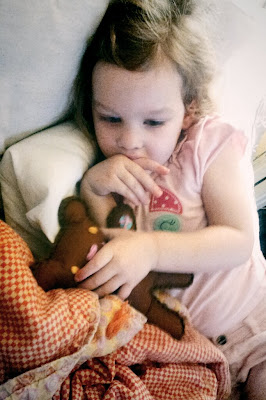 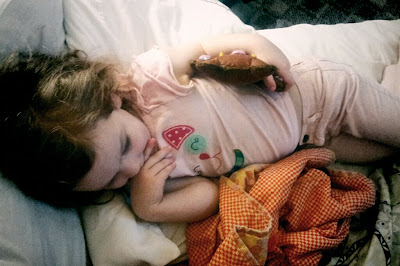 I love creating things!  Even if they aren't spectacular, it makes me feel good.  It has been a long time since I really did some good creating, and I feel the need to do it more often.  Hopefully when the weather warms up I will be able to do some of the big projects I have in mind.
at February 15, 2013

I love a nice wreath!

By the way, organic, extra virgin coconut oil is great and has anti-bacterial properties. So does organic, 100% pure shea butter.

Oh I might have to try that oil thing -- and I have a confession I rarely wash my face at night either. Though I shower at night (but not every night) and wash my face in the shower, but nights I don't shower, yep to bed with makeup for me.

So bad I know.
And that bear is so so adorable!