It was brimming over with activity and happiness.

Soon to be rectified, though, if I have anything to do with it. So much was done, so many conversations forgotten.  Which is really sad, because my kids are hilarious.  But I am happy to report, I did take some pictures, which is helping me to remember what we did, so I can at least record our comings and goings.

But really, I don't have to apologize for anything.  Because it is wonderful.  Spending so much time with the joys of my life.  We may be busy, but we are so happy.

Here are some pictures of the little boxes I left for the kids when I went to Kansas with them. 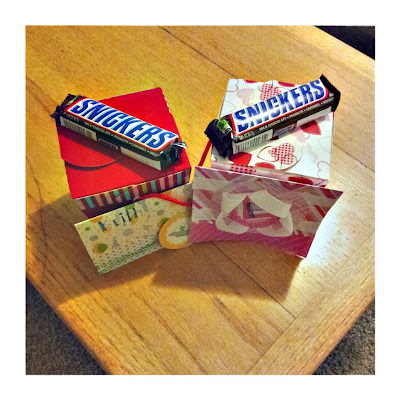 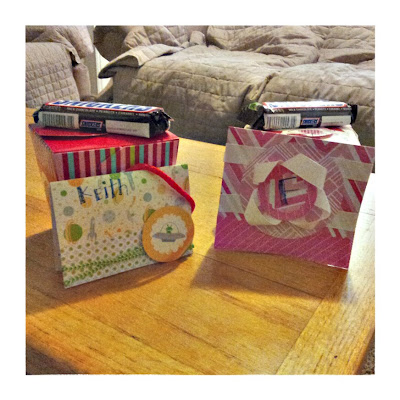 Here are a few pictures of them going on their hunt to find their boxes.  They may not be in chronological order. 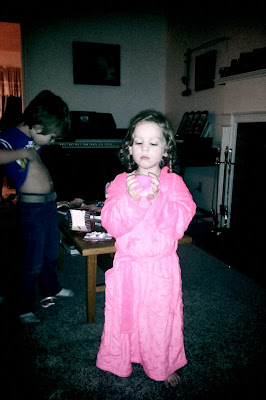 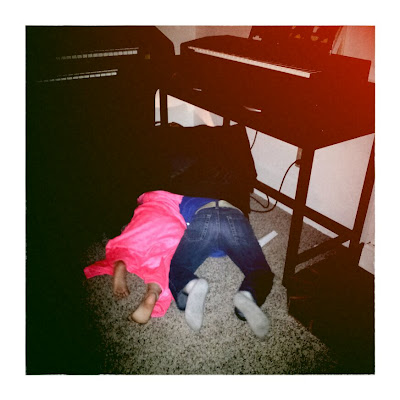 Last Thursday while the kids were napping, I wanted to fill the house with wonderful smells with which to awaken the children.  I made some homemade potpourri, and then I whipped up a batch of oatmeal cookies.  The potpourri smells wafted down and tickled their little noses awake, and soon enough, they were clamoring around me, helping me put the dough on the cookie sheets. 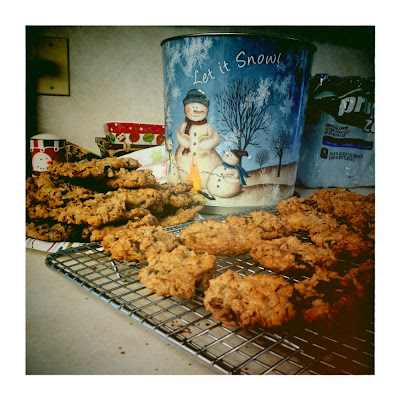 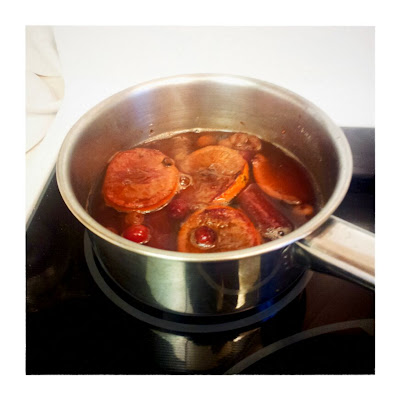 The potpourri was easy to make.  I found an orange in the fruit basket that was no longer fit to eat.  I sliced it up and tossed it in a pan.  I found a few sticks of cinnamon, a few whole cloves, and a handful of frozen cranberries.  I added a bit of water, and put it on to simmer.  It is still giving us lovely smells today!  I love being thrifty!

Friday was a lazy day.  None of us got out of our jammies at all that day.  And then, around 5, my niece sent me a text, asking me to come play with her as her husband would be gone most of the night and she was insanely bored.  After a few preparations, the kids and I were on our way to Idaho!  I wish I had taken pictures of our time up there.  It was a lot of fun.  I taught my Heidi the art of getting pizza from Papa Murphy's for half price (go after 8 and ask for a pre-made, not picked up pizza), and then after brownie supplies and some red cream soda, we went back to her house to begin our party.  It was lovely.  I also introduced her to Sabrina the Teenage Witch.  Remember TGIF?  She is now hooked.  As well she should be.  Though she kept laughing at the 90's styles, which I found odd, because it didn't look all that outlandish to me.  But then again, I grew up then, so it was normal.  I fell asleep while she was engrossed in the world of magic.  The next morning, her husband Aaron came home, and the kids had so much fun climbing on him, and playing with him.  He had a child on each knee, and they were playing a game on the computer, and it was the cutest thing ever.  But Heidi wasn't feeling well, so I wasn't taking pictures, I was trying to help her. 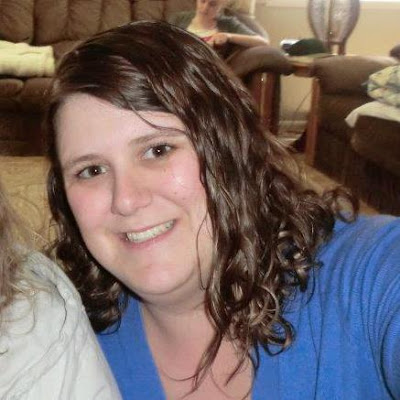 On our way home from Idaho, I got to stop and visit Lisa, a dear friend of mine.  Again, I didn't think to take pictures.  We were so engrossed in our conversations, that the thought of stopping our chat for a photo op never occurred to us.  Typical.  Lisa, we must get a photo of us before you go to TN.  That is not a request. Just sayin'.

On my way home from her house, I learned something that made me a little sad.  Remember my sad Christmas story? Well, my Grandpa was visiting my Grandma in the rehab place, and she mentioned it sounded like he had pneumonia again.  Somehow someone convinced him to go see a doctor (which is actually a miracle because he is the most stubborn man I have ever met) and while he was there, he was admitted to the hospital for congestive heart failure on top of the pneumonia.  He stayed until yesterday, actually, when he was transferred to the room right across the hall from Grandma at the rehab center because he is weaker than he ought to be, and they want to help him with that.  But at the time, I didn't know that.  All I knew, he was in the hospital.

After church on Sunday we had a Superbowl party.  It was fun, actually.  We laughed because it was probably the first non-nerd thing we did as a group of friends.  The monkey at the zoo predicted the Ravens would win.  My faith in animal predictions holds strong.  I am really keeping my fingers crossed that the groundhog keeps his promise.  I could use some nice sunshine.  Especially since it is supposed to snow this weekend again.  And next weekend.

Monday was Jeffrey's mother's birthday.  I thought her birthday was on the 8th, so we did nothing for her.  I felt bad.  I had planes for the kids to make her something, but seeing as how that morning I heard her talking to people and thanking them for calling on her birthday, I knew we were too late.  Mondays are her night to cook, but I convinced her to go out to eat for her birthday.  Jeffrey had gotten a gift card for Red Robin for Christmas, and we did the same.  Followed by a trip to the store to get her a gift.  I tease her about the amount of salt and pepper shakers she has.  She said she doesn't collect them, people just give them to her (I am not kidding when I say she has about 15 sets).  Of course, we had to give her a salt and pepper grinder! Funny enough, she was very excited.  Probably because it was really good salt.  Himalayan salt!  So yum.

And then, yesterday, it was National Pancake Day.  The kids and I went for lunch.  I love going out with them.  We played tic tac toe while we waited for the food to arrive. 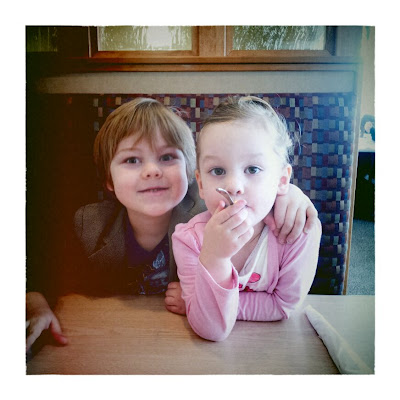 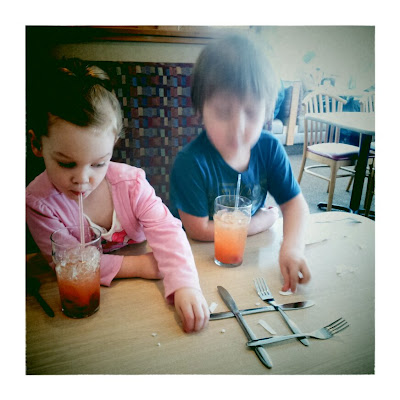 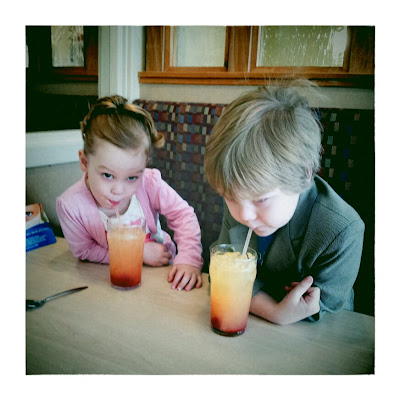 Faye was very excited to get to meet a beauty queen.  Or in her words "a real live princess!" 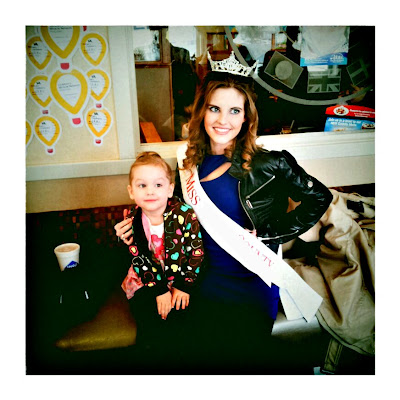 What a very fun day!

That night I had the opportunity to attend a class on how to deal with tantrums and child rearing in general.  Our trip to the zoo has been plaguing me, and I wanted to learn a way to cope with that type of tantrum.  I had lots of questions, and doubts about the way I handled the whole situation, and having a professional child psychologist to talk with would be wonderful!  As it turns out, I was the only one who showed up for the class, and so I got some serious one on one help.  I try to do a good job as a parent, balancing discipline with being their friend, but sometimes the monster mom comes out, and afterwards I hang my head in shame.  It was gratifying to hear that I am doing a good job.  That my children are very well adjusted, and wonderful.  Especially to hear it from a man whose profession it is to help.  Watching me interact with my kids he said he was impressed.  I may have blushed with pride just a little.  And he gave me a lot of helpful information on how to deal with a control oriented child.  Yay!  Lots of really good information, which I plan to share in another post.  All in all, it was a great day yesterday.  Busy, but great.

Today, not so much.  I woke up with a fever.  So not fair!  It will be nice to get out of this sick weather and have health restored to my family.  It would also be nice to have it warm up enough to go for a good hike.  Oh how I miss playing outside with the kiddos.  But the Groundhog promised, right?  And animals never break their promises, right?

Myya said…
I am always happy when I hear moms say that they were too busy being moms to be able to blog. Life happens & sometimes that's just the way things work out. Our lil munckins should of course be the highest priority anyways!

Love that Faye got to take pics with a "princess", that seriously is every little girls dream right!!!

My youngest only went poo on the potty becaue I promised she could talk to Snow White (Thank God for Auntie Shana accepting random requests).

Susan Anderson said…
What a great diary! I really enjoyed reading it.

And lucky you, getting one on one time with the psychologist. Can't believe no one else took advantage of that class!

Sorry you're sick again. You guys have had your share of it lately.