Exito is Sapnish for Success

Which is success in Spanish.  And for some reason, I always want to say "exito!" instead of "success!"

Today was a very busy day.  I had lots of energy and I was able to get a lot accomplished.  More importantly, I surprisingly had enough patience to get the kids to help.  Which doesn't happen usually.

I talked to Keith and Faye about what it means to be an adult, and how they are in training to be adults.  We went over the things they should be able to do by their ages, and decided to work on a few things.  And then, they helped to clean their room!  And put their clothes away!  It was wonderful.  I decided, though, that instead of them having one hamper to put their things in, I need to get them each their own basket.  Then, when I wash clothes, once they are folded, the kids can put their own basket full of clothes away.  And since it wasn't listed in the book where I got the age appropriate things they should be able to do, I decided that folding your clothes is age six.  Just because I was tired and didn't want to fight.  It was a compromise to help them work, and to not feel too overwhelmed.

We got the basement and their room cleaned, and all of the laundry washed, folded and put away.  Including their bedding.  And it all started out with me telling them I am not their maid, and they need to do their part.  I pretended to be a school teacher, and spoke in a very posh voice (which translates to a British accent, of course) telling them our new system. 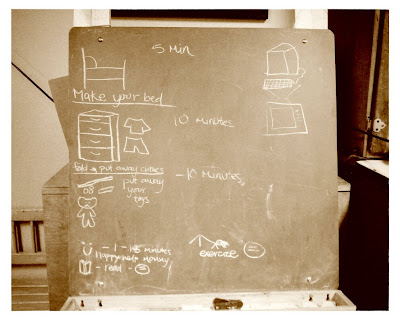 For each thing completed, they would get a certain amount of minutes towards electronics.  For Keith it would be for video games with his dad.  For Faye it would be for My Little Pony watching.  If they got everything on the list done that day, they would get 5 points total.  When they reach 50 points, they get a dollar.  They can either save their dollar, or we can take them to the dollar store to spend it.  They loved the idea and immediately began chasing each other in circles to accomplish the exercise requirement.

It was a Herculean effort, but we were all happy while we did it.  While cleaning, Keith (for the first time ever, I might add) started to play the "I love you more than..." game.  It made me so happy.  From him, lately, all I have gotten is "I hate you Mom!  I will never like you ever again." type things.  I was thrilled to hear him voluntarily telling me how much he loves me.  Especially when I was making him work.  Something he told me over and over he did not like to do.  We did have a brief break in the midst of our cleaning when Keith was especially discouraged to talk about the importance of work.  He kept saying how much he hates to work, so we went into my room, pulled out Preach My Gospel and found a quote by President Ezra Taft Benson.  "Work, work, work- there is no satisfactory substitute..."  We talked about how everything worth doing is worth doing right, and nothing worth having comes easily.  We talked about how he will be required to work for the rest of his life, and how he should find a way to like it now, rather than hate it forever.  And then we talked about how to make it fun.  I found a nerf gun, and we decided that while I was busy with the laundry, he and Faye would be cleaning their room.  Every now and again, I would sneak up on them, and if they weren't working, I would get to pull out my French accent (because Keith really likes that one) and shoot them with the nerf darts.  We had a lot of fun with that.  They got a lot of cleaning done, Keith carried around his sword and tried to deflect the darts when I shot them, and rather than hate the experience, he ended up really liking it.  As evidenced by the "I love you" game!

After lunch (which Keith made.  Apple sliced dipped in peanut butter), we decided to take a break.  Well, the kids did.  They earned it.  They watched a show, and I secretly hoped they would fall asleep during it, but they didn't.  But they were happy with their reward.  When it was over, we decided to make bread.  I had a recipe I was dying to try out, though I tweaked it quite a bit.

Sadly, the bread experience wasn't as positive as the working experience.  Keith measured out everything like an expert chef, and then was so excited to watch the Bosch, he slipped off the counter, and landed face first on the floor. 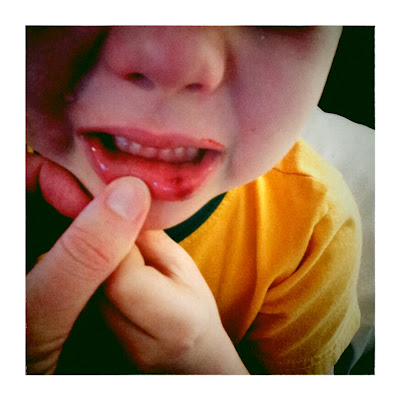 His tooth punctured his lip, in two places.  And his knee got banged up pretty bad.  When I saw the blood pouring from his mouth, I was afraid to see a tooth missing, or one lose.  Happily, it wasn't.  I of course scooped him right into my lap and gave him a good long hug.  He cried, burrying his head into my shoulder, getting tears and blood all over it.  But I didn't care.  Unbeknownst to him, I was dropping tears into his hair.  I hate to see my little ones hurting.  I cried right along with him.  After a bit of crying, and more cuddling, I gave him a popsicle because that was the only way I could think to get him to keep something cold on his lip to help with the swelling.  When he finished his popsicle, he said in a teary brave voice;
"Mom, remember how when we get hurt you usually let us watch a show on your bed?"

I had to laugh.  I gave him a hug, and we went down, and discovered I had left Faye in her room (time out) for screaming for nearly 45 minutes.  And she had stayed!  As I went down the stairs, I heard a faint "Moooooooommmmmmmmyyyyyyyy."  It wasn't urgent, just casual and a little loud.  Like she was just trying to get my attention in casual conversation.  Guiltily, I poked my head into her room to see her hanging on the ladder to the bunk bed, head upside down, her lovely honey brown hair cascading over her face as she gazed at me through that mop of curls.  She was swinging back and forth slightly and smiling.  I asked her if she had called me, and she shook her head no.  Then she said "Wait.  Yes I did.  Can I come out of my room now?"  My already mushy heart was a complete puddle by this point.  She was so sweet, and non accusing.  She had no anger or malice, she just wanted to be with us again.  When I sent her to her room, I probably should have told her she could come out when she could talk to us normally like I usually do.  This time I forgot, but she didn't care, she just wanted to come out and play again.  I gave her a hug, and asked if she wanted to join Keith for a show since he got her.  She took my hand and happily nodded her head.  Together the three of us went into my room, I got them comfortably situated on the bed, picked out a show, and then left them while I went up to get dinner started. 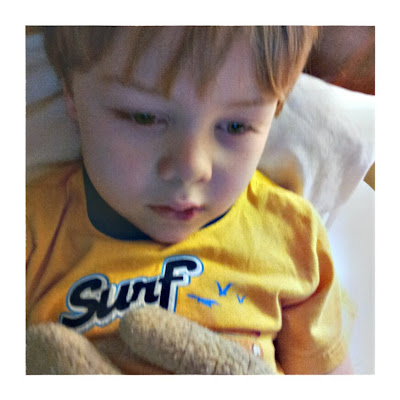 When someone is sick or hurt, they get to chose what we have for dinner.

Macaroni and cheese, of course.  I should have known.

By the time we finished eating, the bread was ready to come out of the oven.  I thought.  It wasn't really.  It was beautiful and brown and hollow sounding, so I pulled it out, and dumped it out of the pan.  And then it started to shrink.  Like a balloon with a slow leak.  I panicked and put it back in the pan and back in the oven, but the beautiful rise on top was a squooshed and wrinkled now.  7 more minutes and it was perfect.  Wise and wrinkled and delicious.  Yet more proof that one should never judge a book by its cover.  Or a loaf by its crumpled top. 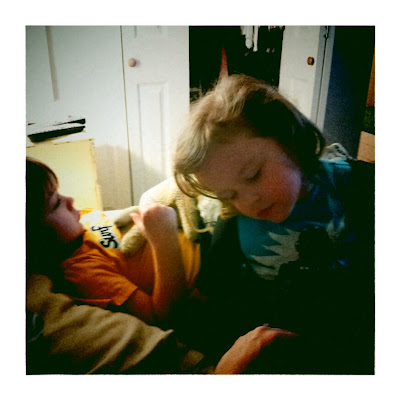 Then scriptures, then prayers, and they went right to bed.  No fighting, no arguing, and I only had to send Faye back twice!  Both times she came back for a hug and a kiss. That girl is a kissing machine!  Like a woodpecker, she will kiss, pull her head back, aim, and then come in again for another kiss.  And she does it very quickly.  Sometimes there is no aiming involved, kisses just land wherever.  And her hugs!  So tight I sometimes worry my head will pop off like my Barbies' heads used to.  She just squeezes and squeezes, and she is deceptively strong.  But I love every second of it.  It is mana to these tired bones of mine.  Especially after a marathon day like today!

I think sometimes when we have really discouraging days (see yesterday) either we are more attune to the wonderful things and the wonderful life we really have, or Heavenly Father sees that we really just need a break.  Either way, I am so glad that I was able to have a rotten day yesterday so that I could taste and appreciate the beauty of today.

British accent... LOL That is my sisters go to accent too. Love it!

Ouchie on the bloody lip, that is no bueno :(

I love that you do accents!

Love that your teacher voice is a British accent.

And sounds like you came up with a great chore systems that will work for you.

Keith's poor lip-- hate when they bleed like that.