January 05, 2013
Today was Trivia Day. And Tom Thumb Day.  We were going to go to the library and get Trivia books and Tom Thumb, but there were other plans in the works.

I think this week was also a "Pajama Day" sort of week. 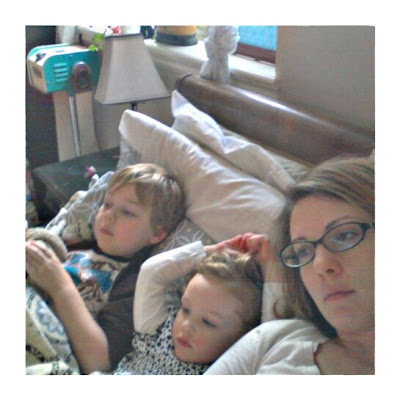 The inevitable happened, and I got sick.  As I knew I would.  And so, today was spent in my bed with the little ones around me, watching movies. 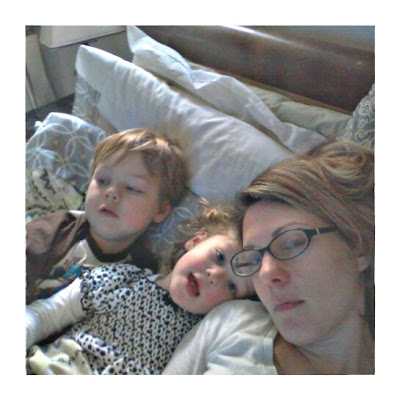 Lunch time rolled around.  We were all hungry.  And I was completely dead. 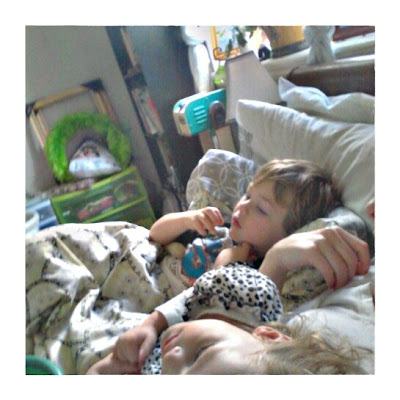 I thought about getting out of bed and going upstairs to make dinner, but that seemed like too much work.  I really was exhausted and felt like I couldn't move.  So I did what I have never done before, and honestly, I sort of hope I never have to do it again.  I had a pizza delivered. 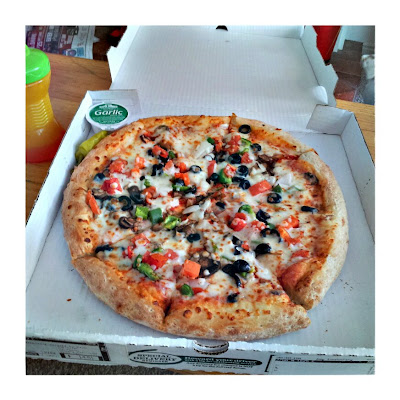 Keith is picky though, it turns out.  He only likes pepperoni pizza and this one was a veggie pizza.  After three bites, he threw it down and said he was going to go make himself a sandwich.  At which point he came back into the room with a tortilla shell.  And that was it.

But it worked out in his favor in the end, I guess, because when we finished eating, we went to bed for our nap.  Keith woke up first, and found his way to the freezer.  And found the ice cream.  A boy after my heart.  I was told he had been eating it straight out of the carton with a spoon.  I of course was oblivious to the whole thing, sleeping through the ice cream pilfering.

Funny thing, he did the same thing while I was asleep.  This morning.  The evidence was in the bowl that I thought was yogurt.

When I was a kid, I used to sneak ice cream, too.  My mom has the most incredible sense of smell.  In the world.  I remember sneaking downstairs to the freezer and eating the chocolate ice cream.  With my hands.  Because I wasn't smart enough to sneak the spoon downstairs, too.  Keith got his brains from his dad.  He smuggles his spoons.  My mom could always smell the chocolate from upstairs, though.  Which honestly blows my mind.  How could anyone have a sense of smell that good?!

I didn't get my mom's nose.  Or her eyes that could see everywhere.  At least not when I am sick.

Happily, Monday I had made way too much soup and ended up freezing it for later.  Today turned out to be later.  I love when I can see the Lord's hand in my life, preparing me in even the tiniest ways.  Which is quite a blessing to see, since just yesterday I was having some doubts.  What a tender mercy if I ever saw one.

I am hoping I will be better tomorrow because being sick really is the dumps.
Motherhood

Susan Anderson said…
Sorry you're under the weather, Amy. Get well soon!

CB said…
Amy I am sick this morning too and honestly wish I had some little people to snuggle with and steal ice cream - that made me laugh, what a fun kid and dang smart!! Ha ha
Hope you are feeling better soon!

PS I am back to blogging after a crazy year. Come by my new blog and say "Hi".

Xazmin said…
Being sick bites! I hope you are feeling better now.

I can't believe you've never had a pizza delivered before!

We don't do it often, because, well - it's a budget thing. But we sure did it on Christmas eve when it was a blizzard outside! Which I know is mean for the delivery guy - but we gave him a really good tip!!
January 7, 2013 at 7:56 AM

Jenny said…
Gosh, you are resourceful even when you're sick!

Emmy said…
So sorry you were sick. Pretty dang funny though that Keith sneaks icecream.
January 8, 2013 at 2:02 PM